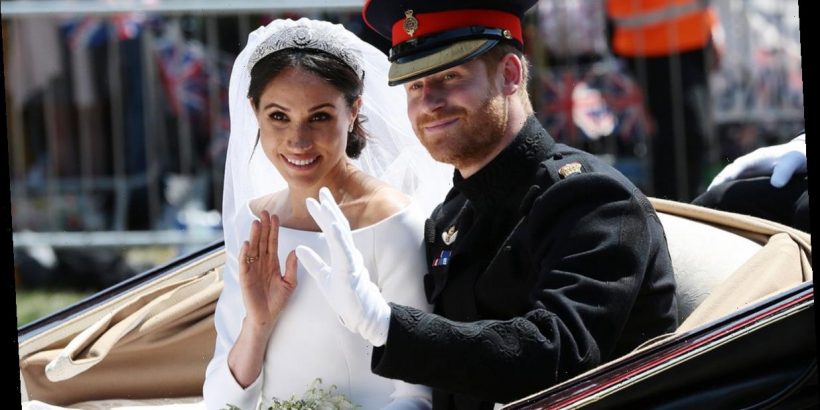 Prince Harry and Meghan Markle tied the knot with the world watching back in 2018, and their royal wedding was full of traditions. The custom of ‘something old, something new, something borrowed and something blue’ was an age-old convention that Meghan was eager to stick to, deciding to have three ‘something blue’ charms on her wedding day.

According to folklore, the notion behind having blue items incorporated into your wedding is to ward off evil, and Meghan had four different blue symbols on her big day. Did you see them all?

When the Duke and Duchess of Sussex stepped out for their wedding reception, wearing glamorous outfits that wouldn’t look out of place in a Bond film, Meghan was also sporting a huge aquamarine ring. This precious piece of jewellery, in its piercing blue shade, originally belonged to Prince Harry’s mother Princess Diana, and she first wore it in 1997.

The soles of Meghan’s wedding shoes were painted blue

Eagle-eyed fans may have also spotted that the soles of Meghan’s shoes for her Frogmore house reception were another blue addition. The Aquazzura pointed court heels had a baby blue pop of colour on the bottom of them.

The royal couple had a lucky blue car for their wedding

One of the couple’s biggest ‘something blue’ charms came in the form of a £350,000 car – the Jaguar E-Type that Prince Harry drove to escort them from Windsor Castle to their wedding party. The convertible was a real statement – and the Duke and Duchess of Cambridge also had a blue car for their 2011 nuptials.

LOOK: 7 moments that almost stole Harry and Meghan’s thunder on their wedding day

WATCH: Meghan Markle reavels her wedding dress has a secret

There was one last nod to the superstition, which you definitely wouldn’t have seen on the day, as it was hidden in the bride’s dress. While speaking in ITV’s Queen of the World, Meghan confessed that she also had a secret charm sewn into her iconic gown. “The piece of blue fabric that’s stitched inside? It was my ‘something blue.’ It’s fabric from the dress that I wore on our first date,” she revealed.