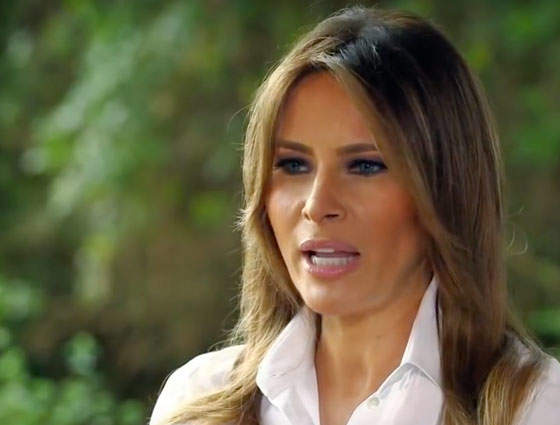 The most bullied person in the world Melania Trump is finally speaking out about that tacky as fuck Zara jacket that she wore in June during her visit to the facility housing children separated from their immigrant parents on the US-Mexico border. Melania gave an interview to ABC News that aired last night, and she was able to skirt around a few issues, including how she felt about Trump’s numerous affairs and that Access Hollywood “grab ’em by the Kit-Kat” tape. But one issue she did come clean about is THAT JACKET and why the crap she decided to wear it on her visit to the children’s detention center, when she should have just worn her 101 Dalmatians puppy fur coat instead.

You may have forgotten what you had for breakfast this morning or who you banged last night sooner than you forget what the jacket said, but here’s a refresher just in case. The back of the $39 two year old olive green jacket said “I Really Don’t Care. Do U?“. At the time, Mealania’s spokesperson (wait, she has one of those?) Stephanie Grisham told Business Insider:

“It’s a jacket. There was no hidden message. After today’s important visit to Texas, I hope the media isn’t going to choose to focus on her wardrobe.”

Well, no surprise, that spin has been re-spun like pink fluffy cotton candy at the County Fair and now Melania is saying, just as The Donald stated through his magical Twitter ball the same day she wore it, that Melania actually did mean something by wearing the jacket.