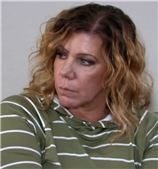 Meri Brown just came so very close to saying it, you guys.

The embattled Sister Wives star, who often shares cryptic memes and messages on social media, re-posted a quote on Instagram that wasn’t a complete admission that she’s left her cruel spiritual husband.

But let’s be honest, shall we?

It’s brave to stand alone while your soul rediscovers who it is and where it wants to be, Meri shared with her many followers over the weekend.

Brown also uploaded some other quotes about taking care of yourself.

One of them reads as follows:

You will be ‘too much’ for some people. Too loud. Too soft. But you’ll always be perfect for the people who love you.

We continue to applaud Meri to standing up for herself and to constantly emphasizing that she doesn’t need a man to be happy.

It’s just… why not take it all the way?

Why not follow the lead of Christine Brown, who announced in November that she’s left Kody and moved back to Utah — and who clearly couldn’t be more proud of herself for having done so.

On one hand, she’ll openly confess that her and Kody have a non-existence romance.

“A few months ago, I used the word ‘estranged’ regarding my relationship in a conversation with a friend. It was the first time I had vocalized it, and it felt … honest,” she admitted in a recent Instagram post, adding:

“I will always look for the best in people and situations, and hope they see it too.

“I want to protect people, their emotions, the tough situations.”

On the Sister Wives Season 16 one-on-one special, meanwhile, viewers learned that this supposed couple hasn’t had sex in 10 years.

“I would love it if he would hold my hand.

“I have hope that he will [come back to full fellowship] and also if he never does then I’m going to create my own peace and happiness within the family relationships that I do have.”

That’s sort of admirable and all, but that brings up the other hand.

WHY NOT LEAVE SUCH A COLD RELATIONSHIP?!?

“Kody and I — we had a conversation recently, that kind of came down to, ‘We’re friends.’ Which I guess is a good thing. I guess I just have hope for more than that,” Meri said on this same TLC special.

“Kody has said some things to me more recently that leads me to believe that there’s no repairing our relationship. There are days when I get very, very discouraged.”

So, why does she stick around?

She somehow thinks a “full fellowship with Kody in the true sense of a husband and wife” could still be a possibility, saying as much to host Sukanya Krishnan in February..

“I also know that my goal and my purpose and my point is to just be a better person and to just look at the family because there’s value to that,” the Lizzie’s Heritage Inn owner explained.

“There is value to this family that we have created.”

But Meri and Kody only have one child, a daughter named Mariah who is fully grown.

And Christine is no longer in the picture.

Therefore, it must be asked: What, exactly, is the family Meri is concerned about here?