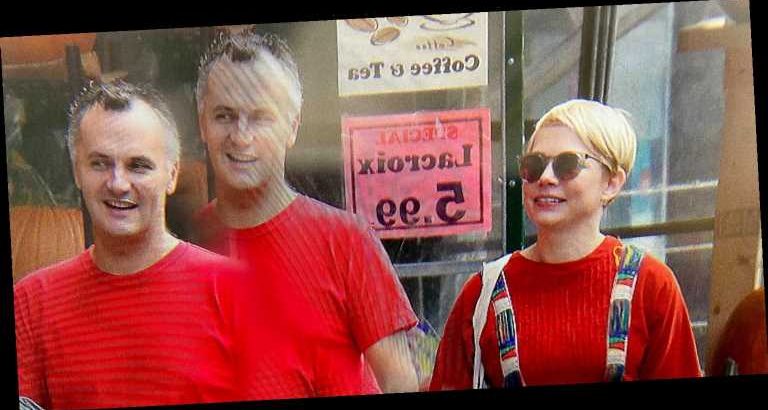 The strangest thing about actress Michelle Williams and musician Phil Elverum's breakup was that they were together at all. Or at least it was a shock to their respective devotees — Gen Xers on Dawson's Creek message boards and Pitchfork bros on r/IndieHeads — when Williams described her secret wedding to the artist in a September 2018 Vanity Fair cover story.

When I saw the first paparazzi photos of them wearing bright red, making out by a pumpkin stand in Park Slope while balancing green juices, it made sense. Like, Manchester by the Sea should absolutely roll the credits to Elverum's song "Ravens" from A Crow Looked at Me. The king and queen of sensitive, alt entertainment were united in their sadness, a sadness that they're able to honor and transform into such good art! When it ended less than a year later, I realized that shared pain isn't the glamorous love story they or I want.

Williams and Elverum (known for his '90s/2000s projects The Microphones and Mount Eerie) met via mutual friends; their notorious privacy makes it hard to get further than that (and even easier to project upon), but there's a case for Busy Phillips playing matchmaker. We do know that Williams said her vows to Elverum in the Adirondack Mountains in July 2018, witnessed by a few friends and their two daughters. Her child's father had been dead 10 years. Heath Ledger's accidental overdose was a national tragedy, but Williams grieved and parented in seclusion. Elverum's wife died of cancer in July 2016, 16 months after their daughter's birth. He gave us an album with an honest thesis: while your life may be over, the world just keeps going. "I never gave up on love," Williams told Vanity Fair after the wedding, after Elverum drove from the most northwestern point of the country to move into her Brooklyn mansion. "I've never once in my life talked about a relationship, but Phil isn't anyone else … Ultimately the way he loves me is the way I want to live my life on the whole. I work to be free inside of the moment. I parent to let Matilda feel free to be herself, and I am finally loved by someone who makes me feel free." At that point in my own life, I hadn't loved without an equal amount of time spent on analysis of the love's imperfections. I loved beautiful boys who were in private pain, and I was intoxicated by the things they would not say.

I grew up in Seattle, an hour from the island town where Elverum makes his emotional, zen Buddhism-influenced sounds. One critic wrote that "to a pocket of Pacific Northwesterners, he is more folkloric deity than musician," and in high school, that's who he was to me. I pretended I discovered The Microphones' The Glow Pt. 2 divinely, but in truth I'm indebted to the Last.fm of my crush at age 16, where I can still see that he has listened to the album 825 times. And I owe it to Elverum that my crush became my first kiss; he invited me over when I dropped my Walkman in our student newspaper classroom and saw the CD that fell out (another embarrassing revelation about my hipster tendencies, because it wasn't '93 but 2013).

According to my journal: I know I don't know much. I know I am in love with [The Microphones' song] "I Want Wind to Blow" and I kind of loved you. Or perhaps a perfect you, a you without everything that left me confused… You make me want to die. I want to forget you and be the empty sea. I took up pages wondering how he felt: He hasn't seemed right all week, what if he got addicted to oxycodone or whatever from his wisdom teeth?! He said I'm pretty and I said 'really' and he said 'kinda.' We would continue hanging out for six months, until I was informed that when he got to college (at Elverum's alma mater), there would be no place for us or me. He was cruel and he was hurting. I was too. I was ready to give all my love in the hopes I'd get any kind of love back.

Maybe you're thinking that my pain was out of proportion compared to losing the parent of your child. I loved Williams' acting and Elverum's music exactly because I could transpose my teenage problems onto the magnitude of their work, seeing myself in lines like "How do you trust your feelings when they can just disappear?" from Blue Valentine.

I had just moved to New York with my (totally different) boyfriend when news broke in April 2019 that Williams and Elverum were no longer together. I was despondent. The internet speculated that Elverum wasn't done grieving, even accusing him of rushing into the marriage, confusing me. Was that not what brought them together? Two beloved creatives had found someone to be moody with who will always understand, who they can ask "what's wrong" instead of wondering whether it's their wisdom teeth or me.

With the help of Elverum's lyrics about the divorce ("Let it all go and follow love and intuition"), I came to the conclusion that a passionate relationship doesn't need to be on a basis of "tortured artist"-style extreme grief that I had long glamorized. It wasn't really a problem that the only qualm I had about my healthy relationship was a fantastical fear that he was too good, too emotionally stable, not fucked up in some way. I was and I am lucky; Williams and Elverum proved that to me.

Williams has not been on any more magazine covers. Elverum is building a house on land more remote than before. And me? I'm happily on Wellbutrin.

Breakups That Broke Us is a weekly column about the failed celebrity relationships that convinced us love is dead.