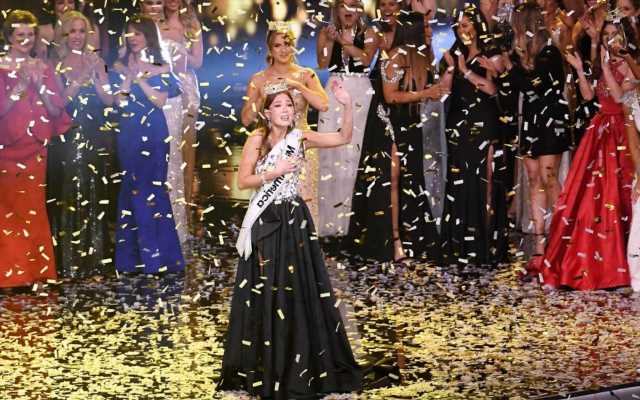 Trailing behind as the first runner-up at the 100th anniversary of the annual competition is Miss Alabama Lauren Bradford, with Miss Massachusetts Elizabeth Pierre given the second runner-up title.

AceShowbiz -Miss America 2022 has been crowned after last year’s competition was canceled due to the COVID-19 pandemic. On Thursday, December 16, Miss Alaska Emma Broyles was honored with the title during the ceremony at Mohegan Sun Arena in Uncasville, Connecticut.

Emma impressed the panel of judges with her impressive answer when she was asked about what they would do in a real-life situation. “I want to show people that I am just like everybody else. I think that people tend to put Miss America and Miss America titleholders up on this pedestal,” Emma said during the challenge portion of the 100th anniversary of the annual competition.

“But one thing that I really try to do, especially as Miss Alaska, is show people that I am real. I have flaws. I have ADHD. I have dermatillomania, which is a form of OCD. I’ve struggled with all of these things and, because of that, I am a better person,” she revealed.

Emma went on explain how she “hit rock bottom” during the COVID-19 pandemic. While she admitted to having “difficult” time while being isolated in her college dorm room for “so long,” Emma eventually realized that she “can be so much more than that.” She also opened up about her ADHD diagnosis and being in support groups.

Trailing behind Emma was Lauren Bradford, Miss Alabama, who was named as the first runner-up. Meanwhile, Miss Massachusetts Elizabeth Pierre was given the second runner-up title.

Emma emerged as the winner after edging out fifty women from across the U.S. to take the title of Miss America 2022 and the $435,000 scholarship award, including a $100,000 sum that will go directly to the winner. She took over the title from Miss Virginia Camille Schrier, who was crowned Miss America in 2019.

“As we planned our 100th Miss America Anniversary competition, we felt who better to honor and celebrate the heritage of this iconic institution than the amazing women who have actually held the title,” Shantel Krebs, Miss America Organization Board Chair and Interim President and CEO, said in a Wednesday press release.

“We are excited to have our forever Miss Americas join us as co-hosts and panelists as they truly understand the hard work and commitment that each of these incredible young women have put in over the past year as they prepare for our final night of competition and the official title of Miss America 2022,” Shantel added.