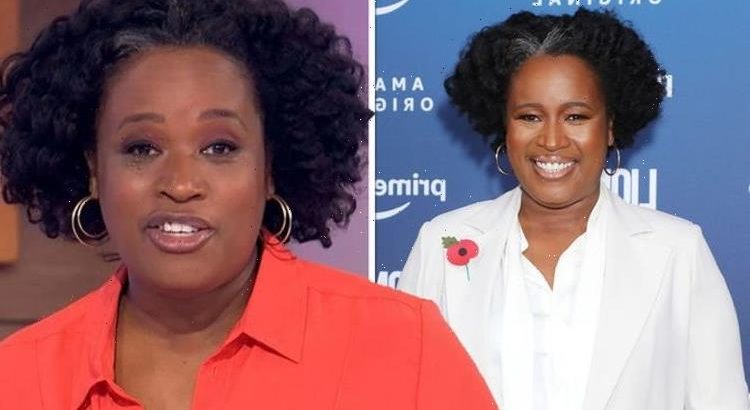 Charlene White says she fell down the stairs

Charlene White is well-known as one of the hosts of ITV news as well as a regular panellist on Loose Women. However, the star took to social media earlier today to pay tribute to one of her co-stars.

The presenter shared her excitement as her friend and boss took on a new role.

This comes as editor Hannah Emerson-Thomas was involved in a new relaunch of Channel 5 News.

Beginning today, this sees the channel change to an hour-long news programme.

In a heartfelt post, Charlene admitted she missed her co-star “very much” after she left ITV News.

Posting in view of her 53,000 followers, she penned: “Good luck to @ClaudiaLizaTV @sianwilliams100 @_caitfitz and the whole @5_News team on the relaunch tonight!

“(And high-fives to my boss and friend @HannahEmersonTh who popped over to 5 News to be the Launch Editor for this.

“I miss her very much, but am a very proud friend!)”

At the end of October, 5 News confirmed it was moving to ITN’s central London headquarters as it rebranded with a new on-air look.

The new show sees them presenting news bulletins from the new studio, as well as exclusive reports.

Elsewhere, Charlene has opened up about her decision to not wear a poppy when presenting on air.

She shared the insight in a lengthy statement on Twitter earlier this week.

She penned: “It’s never an easy decision due to the racist and sexist abuse I often receive on social media as a result.

“I support and am patron of a number of charities, and due to impartiality rules, I am not allowed to visually support them all whilst presenting news programmes.

“That includes things like a red ribbon for World Aids Day, or a purple band for Bowel Cancer Awareness Month.

“Both these and many more charities do great things in the UK, but I’m not allowed to give them exposure on screen.

“So I feel uncomfortable supporting just one charity above all others, namely The Royal British Legion, but I fully support my colleagues who do choose to wear the poppy on screen.”

However, the star also admitted she plans to wear one outside of her on-screen presenting.

She added: “I wear a poppy on Armistice Day – in fact, I wear one that my friend Jen’s mum knitted for me a few years ago.

“And I proudly have one of the ceramic poppies from the Tower Of London on my mantelpiece.

“And every year I donate to the British Legion.

“Money which the charity desperately needs for the work that they do to support serving and ex-servicemen and women and their families.”