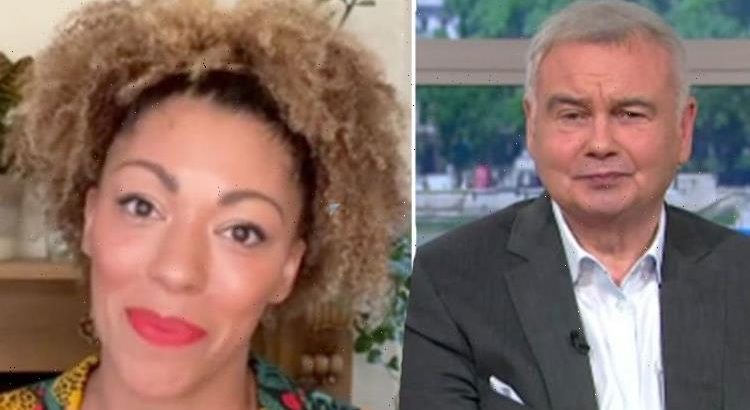 This Morning presenters Eamonn Holmes and Ruth Langsford, 61, had been discussing Britons’ favourite sandwiches from a survey on the show, before linking over to Zoe Williams, 41, who was at home. Ahead of the doctor commenting on the latest health headlines, he couldn’t resist commenting on her appearance.

The host said Zoe’s hair reminded him of an “alpaca” and wanted to “pet” her tresses.

“You just want to pet it, don’t you? It’s very alpaca-ish,” he remarked.

The doctor laughed off his comment and joked: “Don’t touch my hair!”

Eamonn’s comments have sparked fury amongst This Morning viewers on Twitter.

One wrote: “Did @EamonnHolmes just tell a black woman her hair reminds him of an alpaca and he wants to pet her or am I hallucinating?! #ThisMorning.”

A second added: “@thismorning did @EamonnHolmes just compare the doctor’s Afro to an alpaca?!?”

A third penned: “Poor Dr Zoe. First associated with an Alpaca then cut off.”

“Uh Eamonn what tf was that about? Have u learnt nothing?! U never talk about petting a black woman’s hair.(sic)

“And saying it looks like an Alpaca?!” a fourth ranted.

Following backlash, the broadcaster has taken to Twitter to apologise.

In view of his one million followers, he wrote: “Hey everyone out there.

“If my attempt at being humorous with my friend @DrZoeWilliams was misjudged I am mortified and humbly apologise to anyone who was offended.”