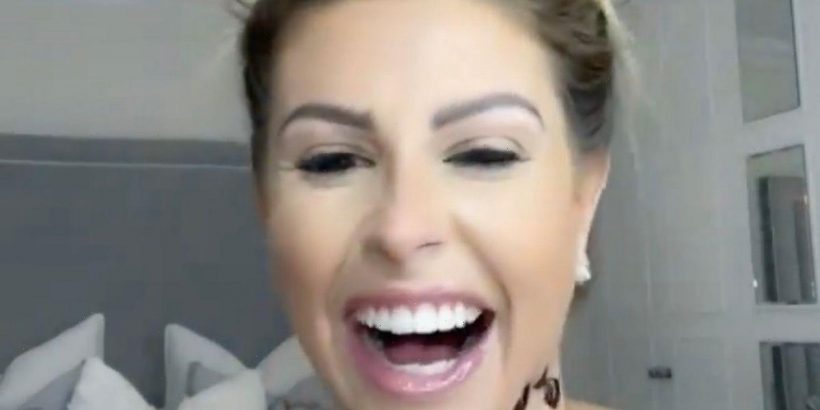 Mrs Hinch was left red-faced after she accidentally made a rather cheeky faux pas while setting up Elf on the Shelf for her children.

Sophie Hinchliffe, 31, shares sons Ronnie, two, and baby Lennie, born in May, with her husband Jamie Hinchliffe, and she calls her family her “world”.

So when it came time for the cleaning and tiding guru, who has released books and her own product ranges as part of her brand Mrs Hinch, to set up a month-long plan for the elf, she went all-out.

In a sweet staged snap of Elf On The Shelf enjoying a spot of ice fishing on her Instagram Stories Thursday, the figure was dressed in a knitted winter jumper and a mint green snowflake-printed scarf.

Sat with his arm draped around a stuffed reindeer toy, the whole scene appeared completely innocent, until fans spot where Sophie decided to prop the elf’s fishing rod.

It was sat upright directly between the elf’s legs, prompting a hilarious response from the star when she realised her mistake.

“Well… I kinda wish I rethought elf’s rod if I’m honest,” she posted alongside an embarrassed emoji and a laughter emoji.

Mrs Hinch continued her game however, with a message asking her children to follow their next instructions.

“Ice ice baby. Can you show your mummy the purple fish,” it read, and inside a little tin filled with flour was four plastic fish in different colours.

A day earlier, Sophie showed off her incredible Christmas decorations and festive display for this year. She revealed that she was spending the evening relaxing after a busy couple of days preparing and setting everything up.

"How I am spending my evening. Boys are now asleep," Sophie shared. "Jamie is out for the evening.

She had personalised tree decorations of her little boys, and an array of elegant white, grey and gold colour themes throughout her home.

In particular, the star gave her fireplace a complete makeover complete with mini fir trees, and the whole room oozed Christmas.

"The fireplace needed a little Christmas spirit," the star wrote alongside her warming snap, which also showed off her mantlepiece garland and a star decoration.

For all your latest updates on Mrs Hinch, sign up to OK!'s daily newsletter.