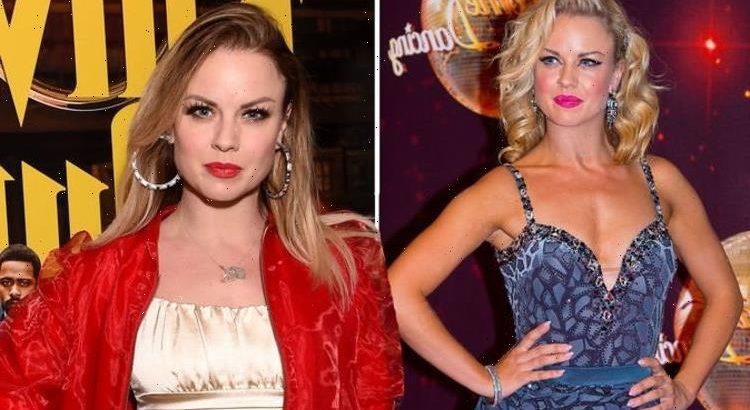 Strictly Come Dancing star Joanne Clifton praised 19-year-old Tilly Ramsay for standing up to LBC presenter Steve Allen, 67, after he branded her a “chubby little thing” and claimed she couldn’t dance on his show this week. Gordon Ramsay’s daughter is currently competing on the BBC show with professional Nikita Kuzmin, 23.

Ex Strictly pro Joanne has revealed she knows all too well just how much such negative comments could affect somebody’s health.

In her twenties, the dancer said she was branded “chubby” which prompted her to be self-conscious about her weight and have an eating disorder.

The 37-year-old said at one point she stopped eating and was “living on 11 espressos a day”.

“It caused me heart palpitations, I had to be in hospital, I was fainting, I had to be put on drips,” she revealed.

“My own mother didn’t even recognise me.”

And the dancer’s health problems didn’t stop there as she added she is now anaemic.

The dancer went on to say she hoped Steve would be held accountable for his negative comments.

She added on her brother’s podcast The Kevin Clifton show: “That poor girl, she is going out in front of 10 million people in dresses, and she has said herself she’s normally in tracksuits.

“She probably doesn’t normally wear the short dresses you wear on Strictly.

“She’s going to be a heck of aware of herself now. Well, she’s probably not because she’s a strong woman and I love the fact she stood up to him.”

Tilly called Steve out on her Instagram page on Wednesday after hearing his remarks.

In view of her one million followers, she wrote as part of a lengthy statement: “Steve please feel free to voice your opinions, however I draw the line at commenting on my appearance.

“It’s such a shame that someone is trying to make such a positive experience negative.”

She went on to warn that such words could hurt somebody’s feelings and urged people to “be kind”.

Tilly was supported by many other Strictly stars including head judge Shirley Ballas.

“My darling, having been through this myself I hear you,” she commented.

“To me you are beautiful just as you are.”

Tom Fletcher wrote: “What the actual hell?! Tilly you are absolutely BEAUTIFUL and don’t let anyone ever tell you otherwise.”

Strictly Come Dancing continues Saturday at 7.05pm on BBC One.