He's turned fairytales into feasts, dangled diners from a crane and made cutlery edible. Having lunch with Heston Blumenthal was always going to throw up its surprises and there are plenty of them during our two-hour lunch at Melbourne's Koko. One of the biggest comes last with the arrival of the bill – all $834.40 of it.

In the rarefied world of high-end dining, it's not uncommon to find a Wagyu steak weighing in at $150 a serve, sashimi worth $75 and top-notch sake at $120 a pop.

But the fact that the menu has remained shut during our meal, with dishes arriving as though by magic, means that when the bill arrives, I'm taken aback. It's an eye-popping glimpse of next-level dining, the likes of which most of us can only dream about. A brief expedition into the wildly extravagant world of the celebrity chef.

Famously eccentric, Heston Blumenthal is known for his slightly mad scientist persona and his over the top historical feasts, which drew inspiration from meals served to Henry VIII and on the Titanic. Of course there's also MasterChef and his restaurants, the three Michelin-starred Fat Duck in Bray, and Dinner by Heston in London and Melbourne.

Koko is a short walk from Dinner and a favourite of the chef when he's in town. Explaining that he wants nothing cooked with vegetable oil (he dislikes the taste and smell of a particular molecule when heated), Blumenthal is keen to try the sashimi and the mushroom soup he loved on a previous visit (dobin mushi). Our impeccable waitress – also the manager, I find out later – suggests some small dishes cooked on the teppan, including Patagonian toothfish, the black cod and the Wagyu. 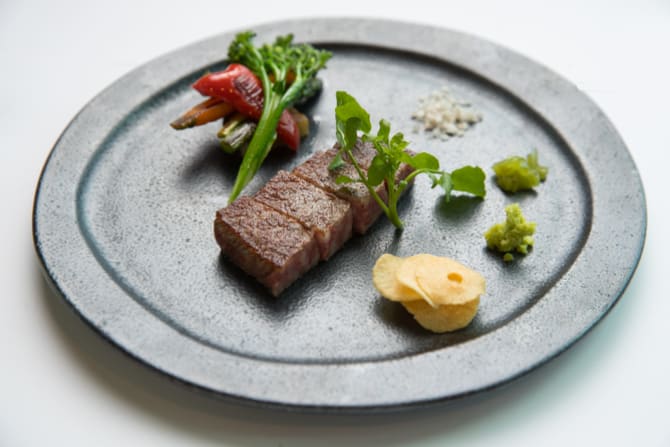 The Wagyu beef at Koko.Credit:Simon Schluter

Blumenthal is lucky to be here. Three weeks ago, while mountain-bike riding down a ravine in the woods in France, he hit a tree stump and tumbled head first over the handlebars. His forearms and shins are dotted with scabs, thanks to an instinctive urge to protect his helmetless head, but the real news is not readily apparent. With a numb left foot since the accident, he's only recently visited a doctor in Melbourne, who sent him for four MRIs and two CT scans. The tests showed there's a crack in each of his knees and a fracture in his toe.

"If I was sitting further back on the bike I would've been OK," he says, shaking his head. "This is my lesson to be less hyperactive, less of a clumsy oaf."

He was instructed to stay off his feet as much as possible for a month. Nothing if not pragmatic, he's trying to look on the bright side. "Where I am living is so beautiful and the stuff that I am working on is more research and I've fallen back in love with cooking… I say this, but when it comes to it, who knows?"

What made human beings the most powerful species on the planet … is being able to imagine things that don't exist.

So, time to kick back and binge on Netflix? Not quite. "New Scientist magazine, cross-referencing evolutionary research, cosmology, mineralogy, the shape of water, microbiome, circadian rhythms – and also I've got a telescope on order."

Blumenthal draws a map on his place mat of where he lives in France. "I'm living in the place where Picasso lived, where Van Gogh cut his ear off, where there was a big Roman settlement – surrounded by this massive bauxite outcrop. It's got the highest level of gamma rays… which gives the region this contrast of light which is just crazy." 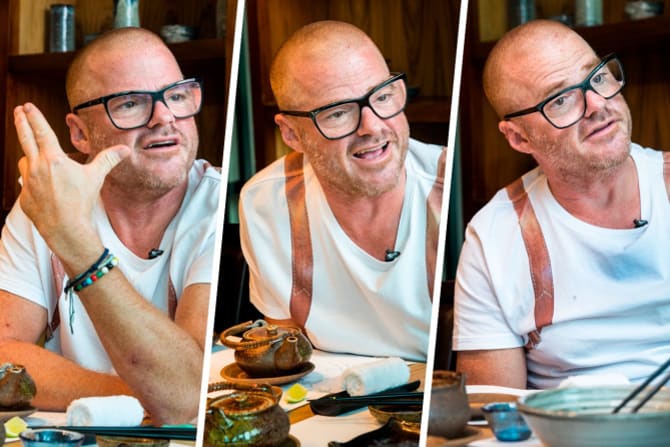 Blumenthal loves the lack of rigidity about food in Australia.Credit:Simon Schluter

He describes how the water comes down from the Rhone Valley, feeding into a delta, and the wind that travels down through it too, drawing a circular visual. "You know the Van Gogh paintings? That's the Mistral."

The French connection is thanks to his wife Stephanie Gouveia, with whom he has a 10-month-old daughter, Shea Rose. Where they live is rich with history and nature, "full of aqueducts and viaducts and fig trees" and home to the oldest civilisation in Europe.

If the conversation sounds meandering, that's because it is. Blumenthal's mind ticks over a mile a minute; he is brimming with ideas and starts one train of thought only to go off on several tangents.

"What made human beings the most powerful species on the planet … is being able to imagine things that don't exist," he muses. "We look up at the stars and we go, 'Oh I'm so insignificant'. No, you're not – you're as significant as a star." 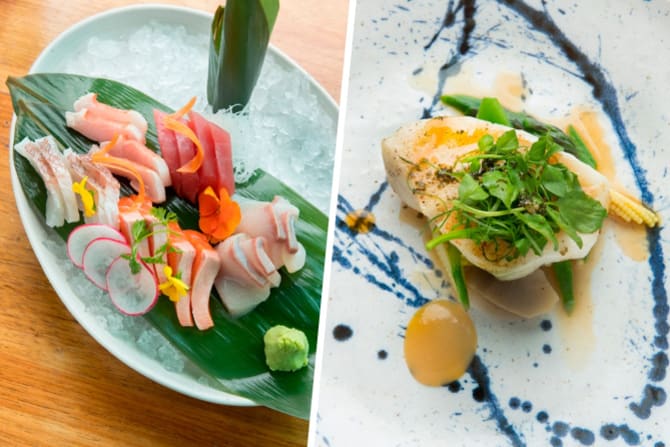 The sashimi and Patagonian toothfish.Credit:Simon Schluter

Known to Australian audiences as much for his work on MasterChef – where he's appeared for nine of the 10 seasons, since 2010 – as his restaurants, Blumenthal is not a chef whose work you easily emulate. There's a reason his creations are usually one of the last challenges on the show.

"MasterChef for me is a program about human beings; it just happens to use food as the medium for it. It was one of the catalysts for the food explosion in Australia and it's one of the biggest explosions I've seen anywhere in the world," he says.

"The show is brutal. [Contestants] get criticised if they mess up, there's nowhere to hide. I've not in any way helped its lack of brutality," he says with a cheeky grin. "But I can't imagine anyone coming off there thinking they're worse off for going on. They get an insight that I think is more valuable than winning the lottery."

A big fan of Australia, Blumenthal loves our the extremes and contrasts. He's particularly impressed by our openness and lack of rigidity about food.

"This is one of the jewels of Australian cooking. I don't know how I can get them to friggin' hold onto it. [In Italy] if you order a cappuccino at lunchtime, you're the devil; if you have parmesan on your seafood…" 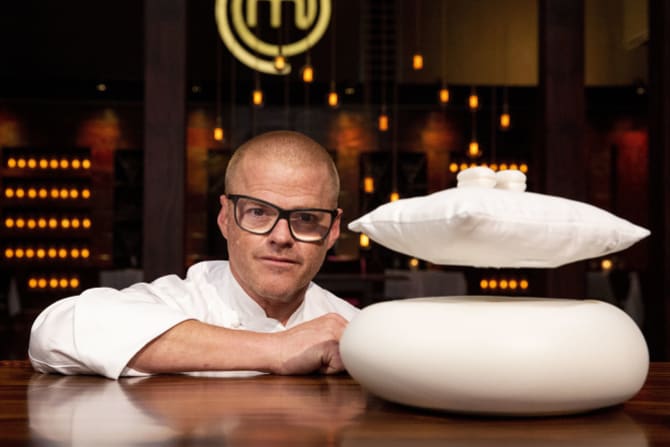 Blumenthal and his Counting Sheep dessert, which was chosen as the pressure test dish for MasterChef Australia's 2018 grand final.Credit:Network 10

To his mind, that's precisely how it should be: fewer rules, more creativity. Snobbery about what one should and shouldn't do annoys him; he's known to drink a tea and a coffee simultaneously.

It was as if I'd fallen down this rabbit hole into a wonderland.

So, does he get into the kitchen much? In his restaurants, no, but at home a box of vegetables from a local farm is delivered each day and he works with whatever is in it.

It was a visit to L'Oustau de Baumaniere, the then two Michelin-starred restaurant near where he now lives that started it all. His parents took him there when he was 16 and the entire evening was imprinted in his memory: the crunch of gravel underfoot, the smell of lavender, the sound of clinking glasses and crickets. "It was as if I'd fallen down this rabbit hole into a wonderland," he has said of the experience.

Over lunch, we cover an array of topics, including the raw food movement ("Stupid, stupid, stupid"), our obsession with hygiene ("I think health and safety is killing us") and George Calombaris' recent wedding in Athens ("Matt was attacked by an octopus").

A recent visit to the Pilbara, in Australia's far north-west, has captivated him. He's determined to find out more about the first humans and then use that information in his cooking. Already the menus at Dinner are based on historical recipes. 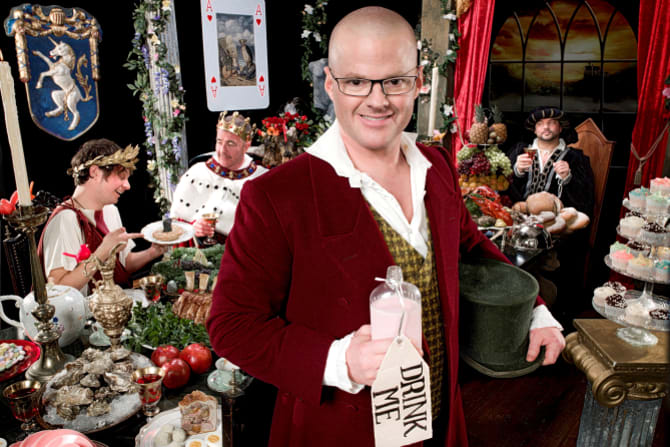 Turning back time in Heston's Feasts.

In Heston's Feasts, he recreated food from various eras and served it at dinner parties with famous guests. Were there any dishes he couldn't replicate? Absolutely – the most memorable, from the 13th century, involved plucking a live bird, basting it and rocking it to sleep with its head under its wing. It would then wake, alongside the cooked birds, and seem to rise from the dead.

Growing up, his favourite dishes were Coronation chicken ("which I ate loads of") and a variation on bolognese ("but not as posh"). He's tickled by the idea of getting his mum to cook one of them when she visits later this month.

Blumenthal has three adult children with his ex-wife Zanna, aged in their early to mid-20s. When they were young, he was working 120 hours a week, which he clearly regrets. Seeing Shea grow and change is amazing, he says, and reminds him about the extraordinary thing that is the evolution of the human race.

During lunch, he conducts an impromptu experiment, asking me to take a sip of my sake while picturing someone I love dearly. Then he says to try a sip while imagining someone I really dislike. The difference is marked – in the second there's a bitter taste not apparent in the first.

"I only discovered this about a month ago. That's an example of the guys down here," he motions to his stomach "and memory playing in together. It might be the single greatest discovery that I've made." 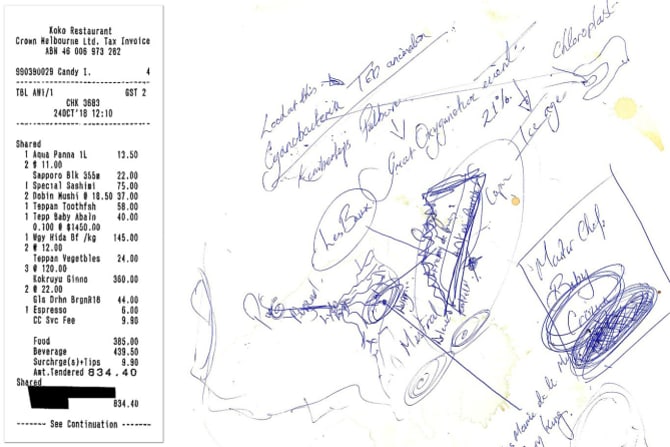 The bill; Blumenthal's notes from lunch.

It's only in the past decade or so that we are starting to understand the significance of the relationship between the brain and the gut. Together with the University of Marseilles, Blumenthal is setting up a laboratory to research exactly that, among other things. His Alice In Wonderland-style quest continues.