Joaquin Phoenix and Rooney Mara, two of Hollywood’s most acclaimed actors, are also one of the most low-key power couples. There have, however, been a handful of tender moments from their years-spanning relationship.

Here are some highlights from their elusive romance, including how they reportedly just welcomed their first child, a son named River, together.

June 2012: The 45-year-old actor first worked with Mara on the set of the science-fiction romance Her. He played a writer who falls for Samantha, an artificial intelligence Operating System voiced by Scarlett Johansson — but not before his relationship with Catherine, played by Mara, comes to an end. 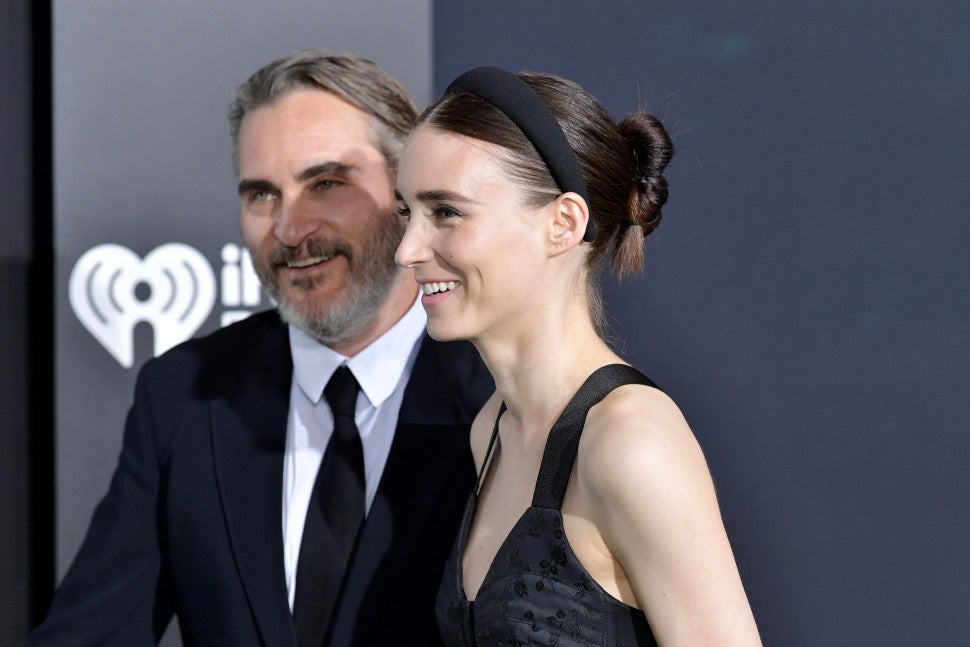 In an interview with Vanity Fair, Phoenix admitted that he thought Mara despised him while they were working together. He soon learned she’s simply shy.

“She’s the only girl I ever looked up on the internet,” he told the magazine. “We were just friends, email friends. I’d never done that. Never looked up a girl online.”

“As you get older or whatever, you’re OK. You go, ‘Maybe it is going to be a bad experience’ or ‘Maybe I’m not going to enjoy it. And maybe I won’t have any of those connections, maybe I’ll feel just hollow afterwards,” he added. “That’s OK. Because I know that I have meaning in other parts of my life. And that’s really what sustains me. I enjoy it. I love my life. I f**king love my life.”

October 2016: The pair worked together again three years later on Mary Magdalene, which tells the story of the woman in the Bible who becomes a follower of Jesus of Nazareth. While Mara took the starring role, Phoenix played Jesus. It was during this production that the pair reportedly started dating.

May 2017: Mara was by Phoenix’s side at the 70th annual Cannes Film Festival. She held his hand during the closing ceremony and was the first to congratulate him when he won the Best Actor prize for his role in the grim thriller You Were Never Really There. 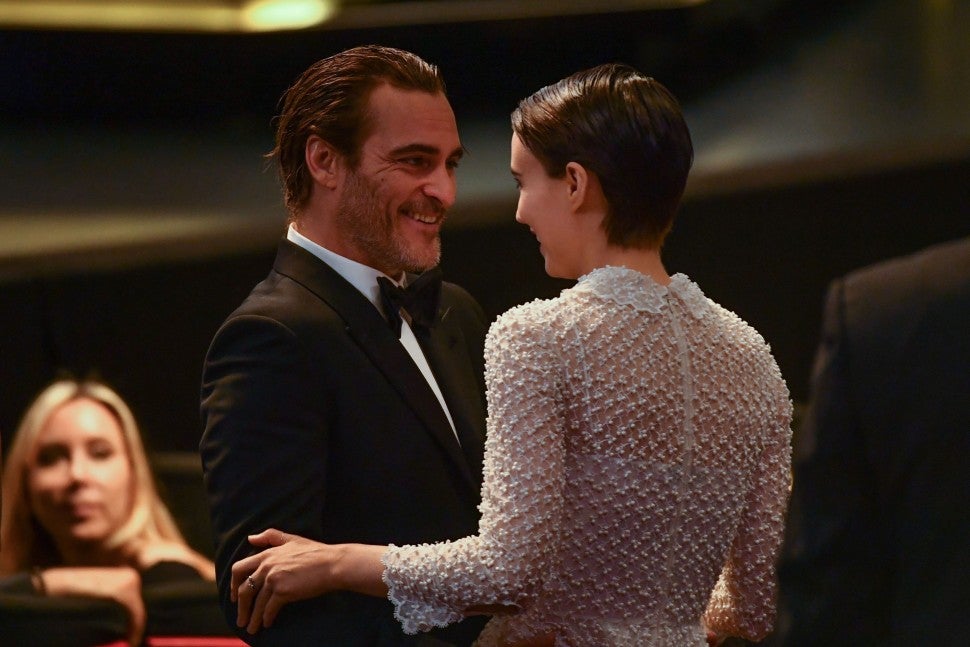 September 2017: In an interview with The New York Times Style Magazine, Phoenix revealed that he and Mara were living together in the Hollywood Hills. He also shared cute details about his Netflix viewing habits, namely that he watched all 10 hours of The Staircase, a true-crime series, because Mara wanted to.

He also hinted that Mara was the reason he took the acting gig on Mary Magdalene: “I was looking for something meaningful. I was looking for an experience. I was friends with Rooney,” he said of the 35-year-old actress.

January 2019: Early in the new year, Phoenix and Mara stepped out together in Los Angeles. The pair maintained a low profile, both rocking sunglasses during their walk about town. The leading man chose black jeans and a black sweatshirt, wrapping his arm around Mara, who rocked a tan trench coat. 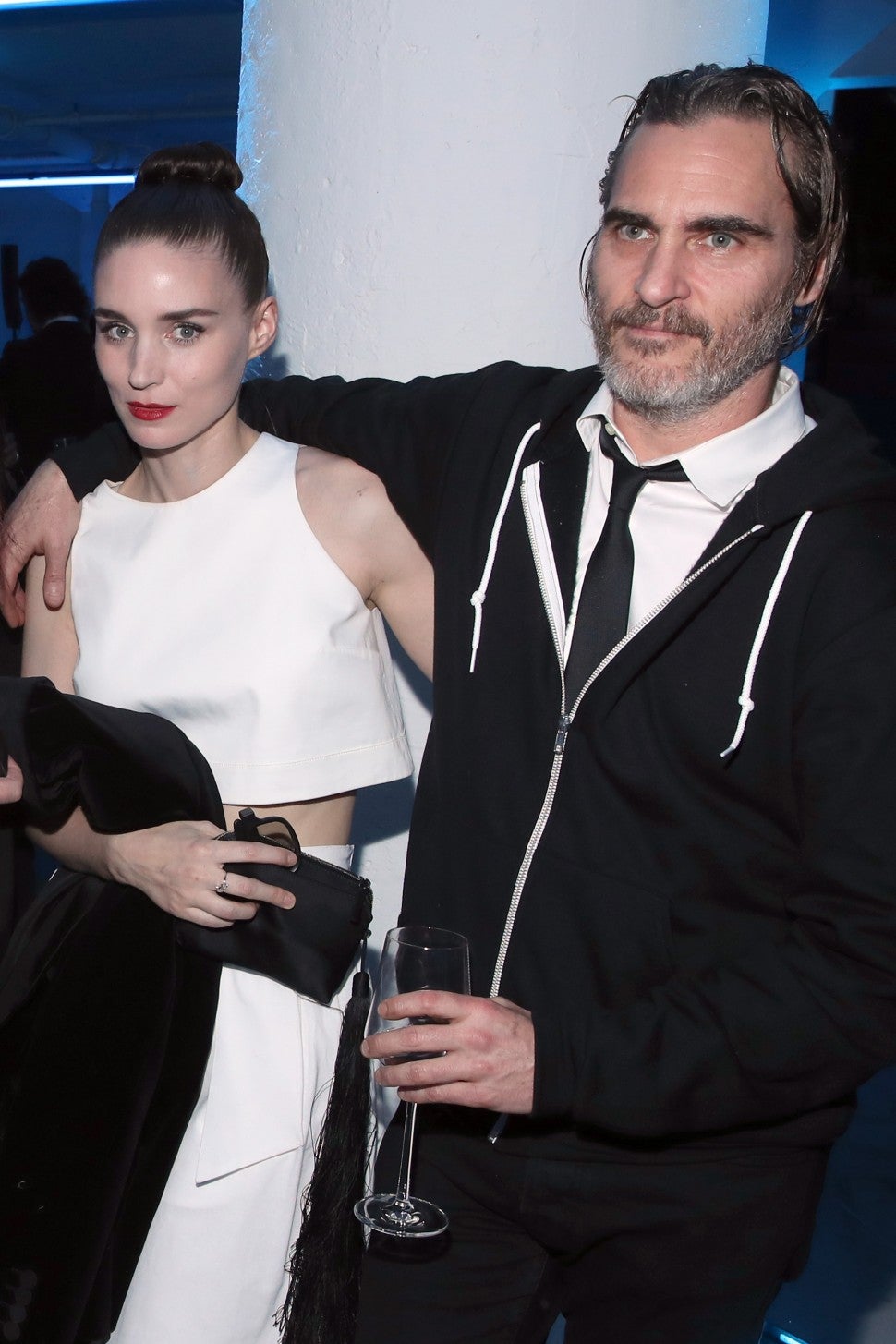 That same month, they also attended artist Michael Muller’s exhibit HEAVEN, presented by Art of Elysium. Phoenix and Mara were co-chairs of the exhibit. The actor wore a white button-up and tie under his black sweatshirt, while Mara sported a white two-piece sleeveless outfit.

May 2019: In the spring, multiple outlets began to report that the pair might be headed down the aisle after Mara was photographed wearing a giant diamond ring on that finger while out and about in L.A.

June 2019: The couple made a joint appearance at the National Animal Rights Day demonstration. Both held dead birds in their hands during a peaceful walk with demonstrators and wore T-shirts that read: “Our planet. Theirs too.” 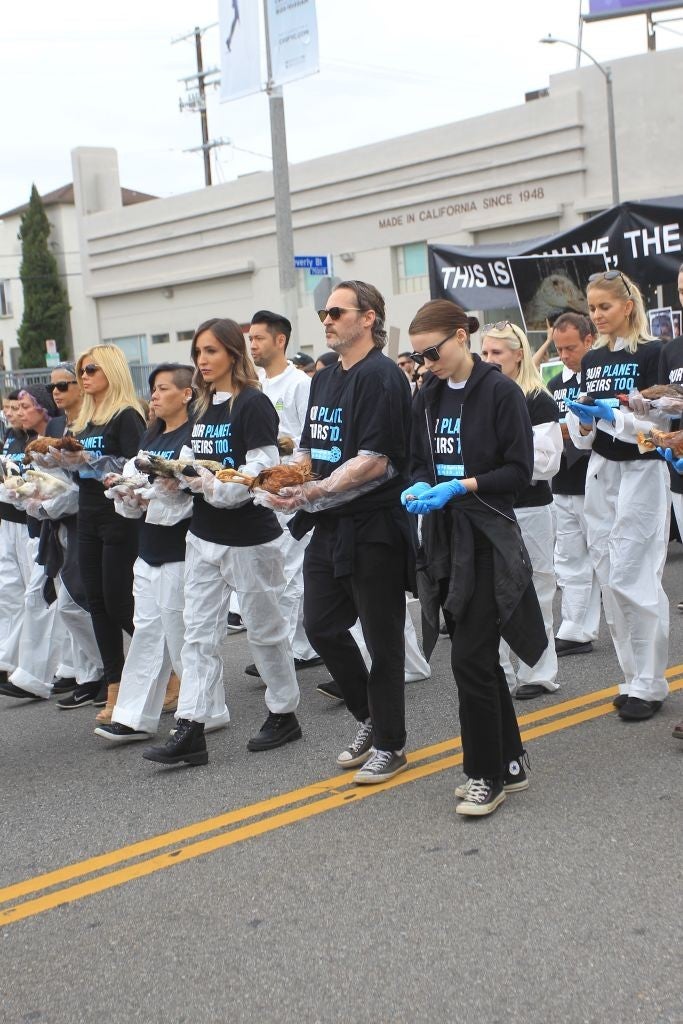 July 2019:  Later that summer, Us Weekly reported that the longtime couple were engaged. Mara and Phoenix were also photographed getting pedicures together at a salon in L.A. Phoenix played on his phone as they relaxed side by side.

August 2019: The couple exuded Old Hollywood glamour at the Venice Film Festival, where Joker premiered. Although they didn’t pose for photos together, Phoenix, wearing a tuxedo with a bow tie, was spied admiring Mara as she was photographed in a white Givenchy gown. 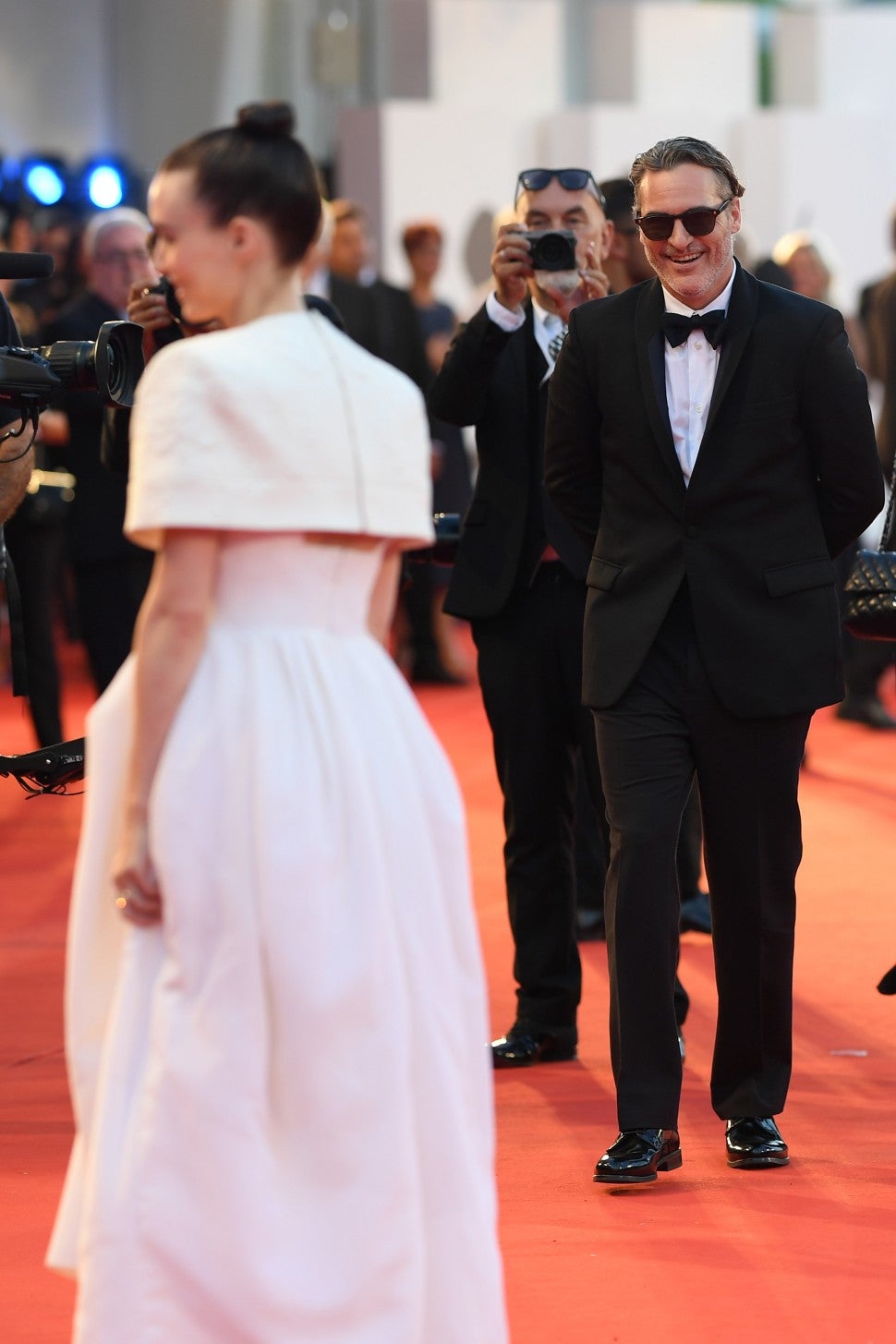 September 2019: Phoenix was awarded the People’s Choice Award at the Toronto International Film Festival for Joker. While accepting his prize, the thespian revealed a rather unusual nickname he has for his fiancee.

“I don’t know who’s really giving me this award, who’s responsible for this or why and frankly, I don’t care. My publicist said somebody wants to give you an award and I said, ‘I’m in. Let’s do it,'” Phoenix said, according to media outlets present. “One last thing, somewhere here, I don’t know where, is a filthy dragon, and I want to rip its wings off and fasten a blanket and sleep with it forever. I love you. Thank you.”

Later in the month, Mara was by Phoenix’s side for the Hollywood premiere of Joker. The actor wore a black suit and tie, while Mara chose a two-piece outfit featuring a black floral design.

January 2020: The couple stepped out for the 2020 Golden Globes on Jan. 5 — and couldn’t have been more adorable. Phoenix, who took home the award for Best Performance by an Actor in a Motion Picture — Drama for Joker, sweetly gazed at his fiancee on the red carpet. Mara couldn’t help but giggle when she caught Phoenix’s reaction. 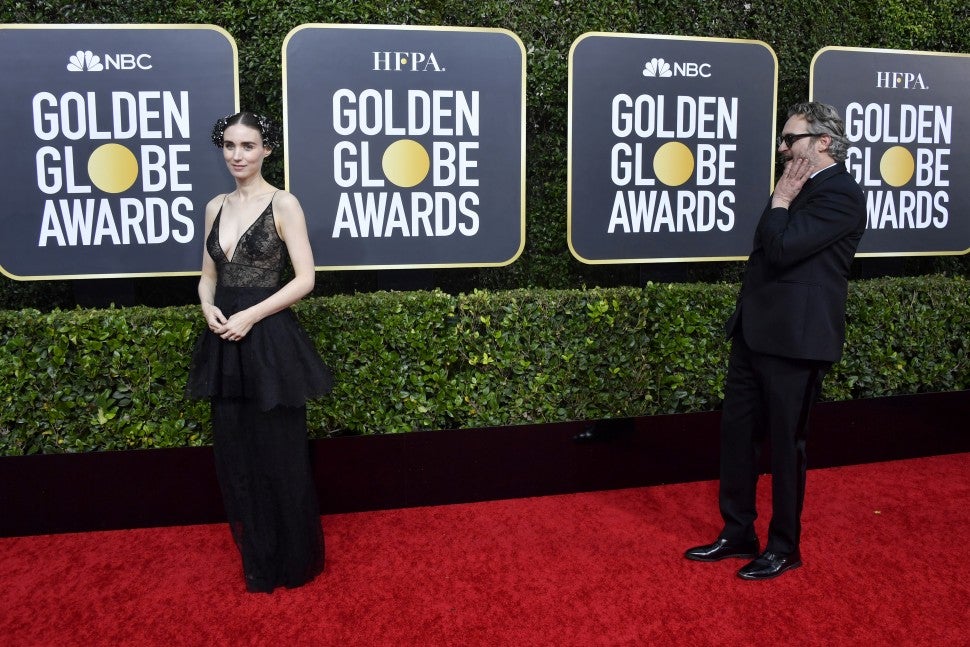 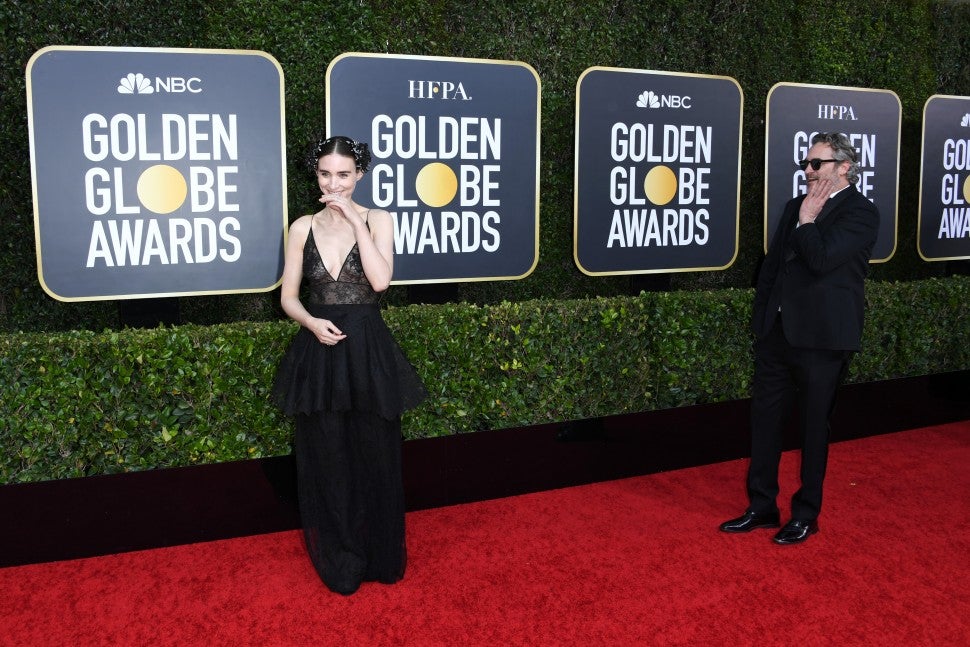 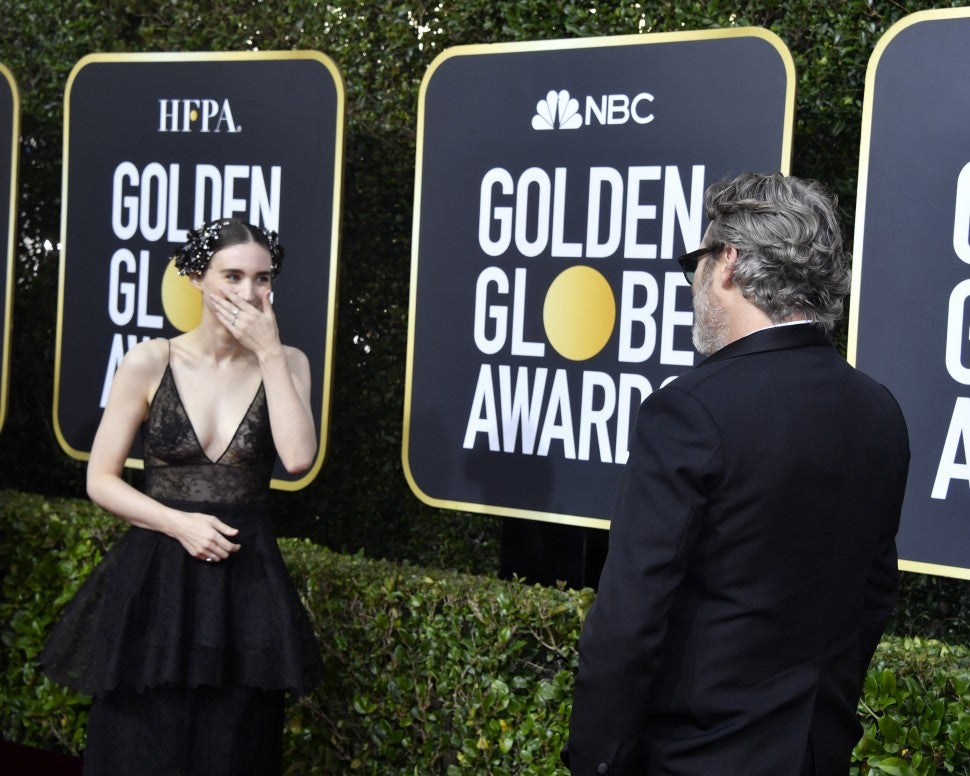 February 2020: While they didn’t pose on the red carpet together, Mara was on hand at the BAFTAs on Feb. 2 when Phoenix won the Leading Actor award for his role in Joker. 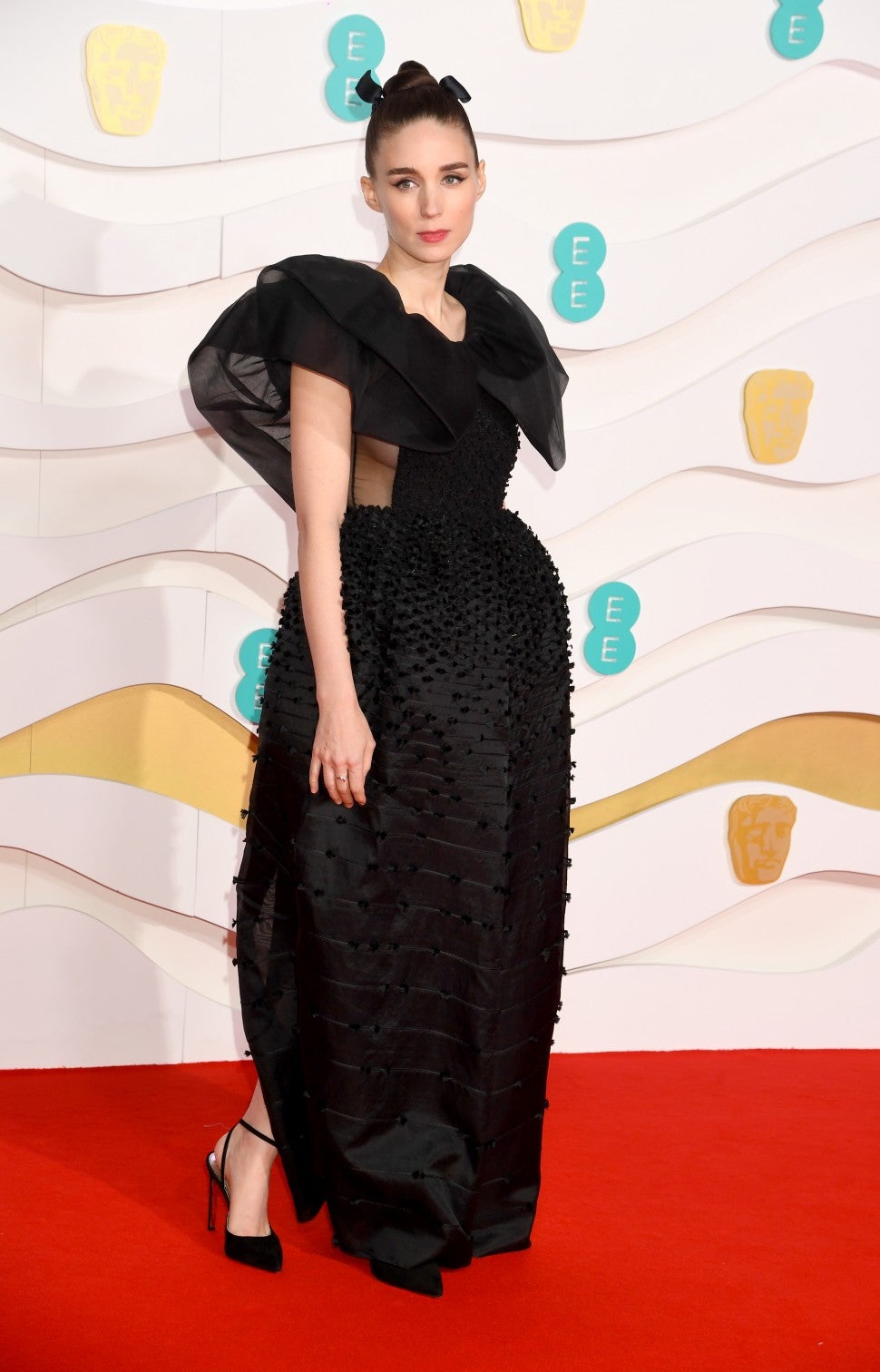 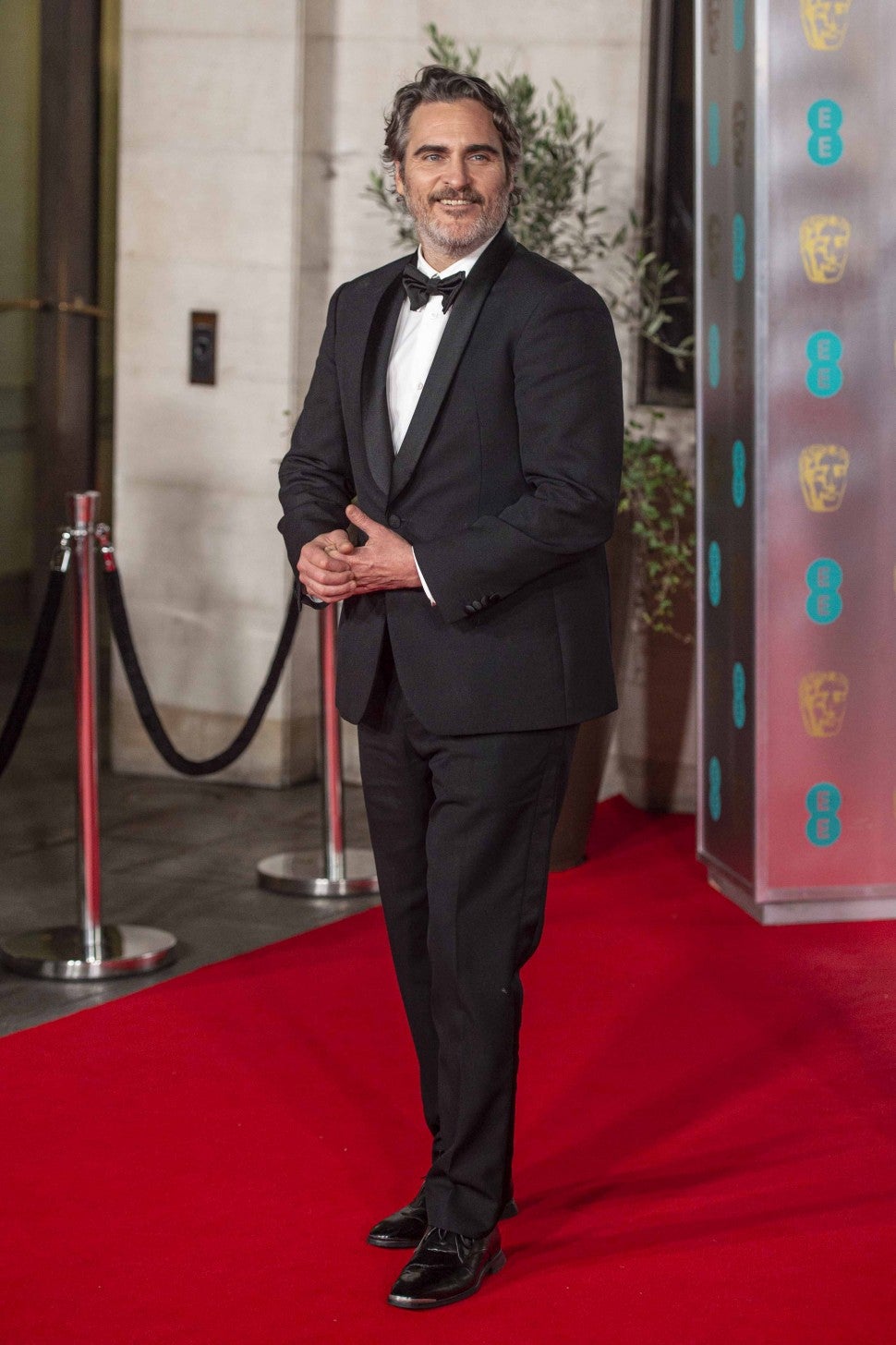 The Oscars, however, were a different story. The two held hands as they walked the red carpet together on Feb. 9 at Hollywood and Highland. They were even seen hugging outside the venue and shared a few laughs while mingling with fellow celebs. 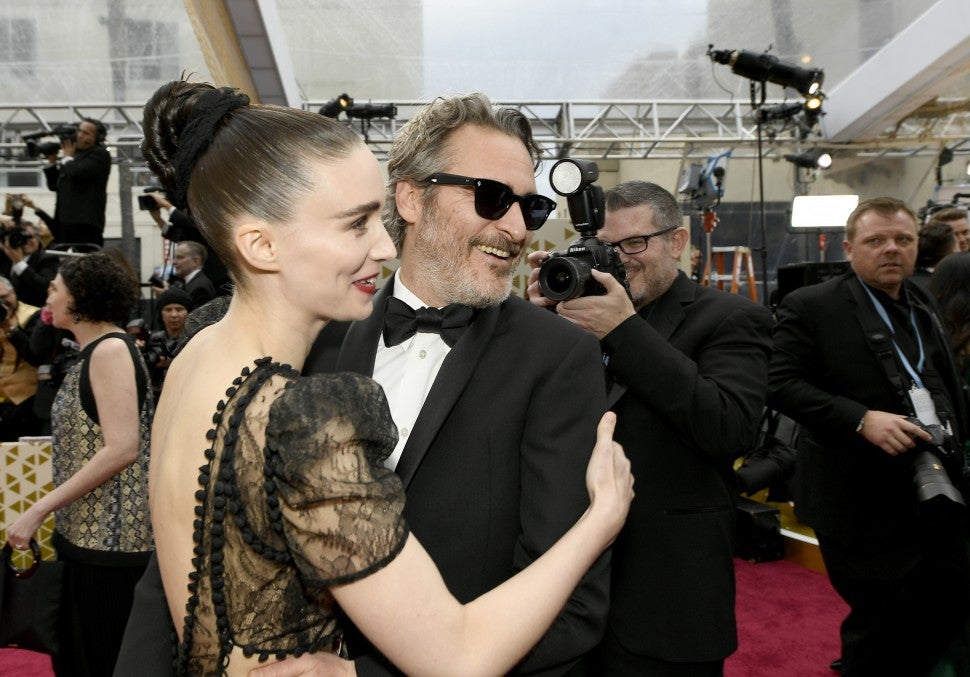 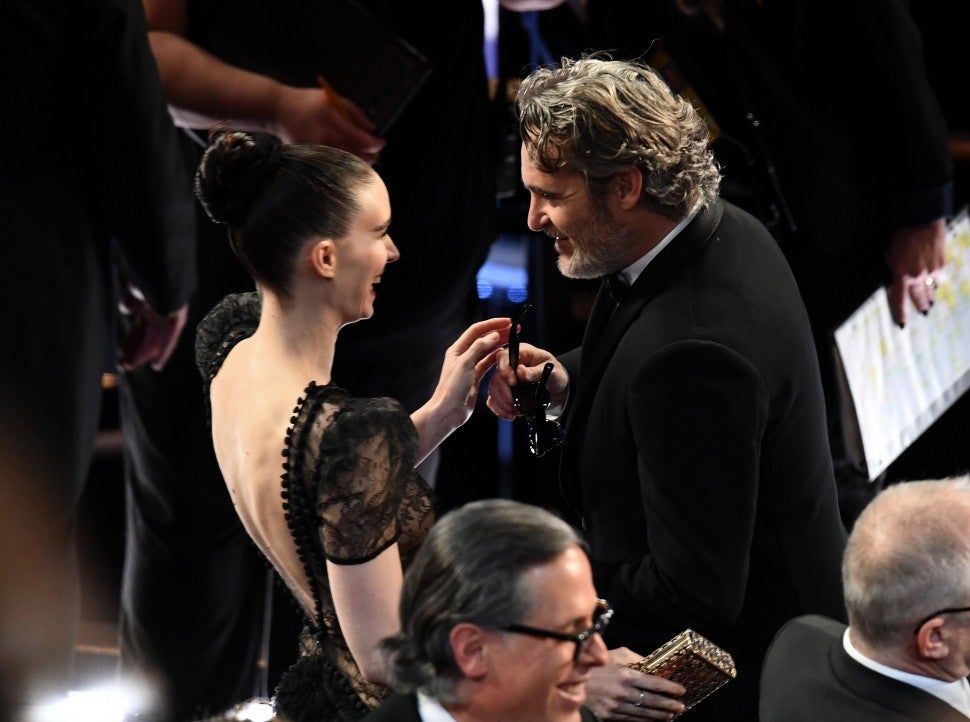 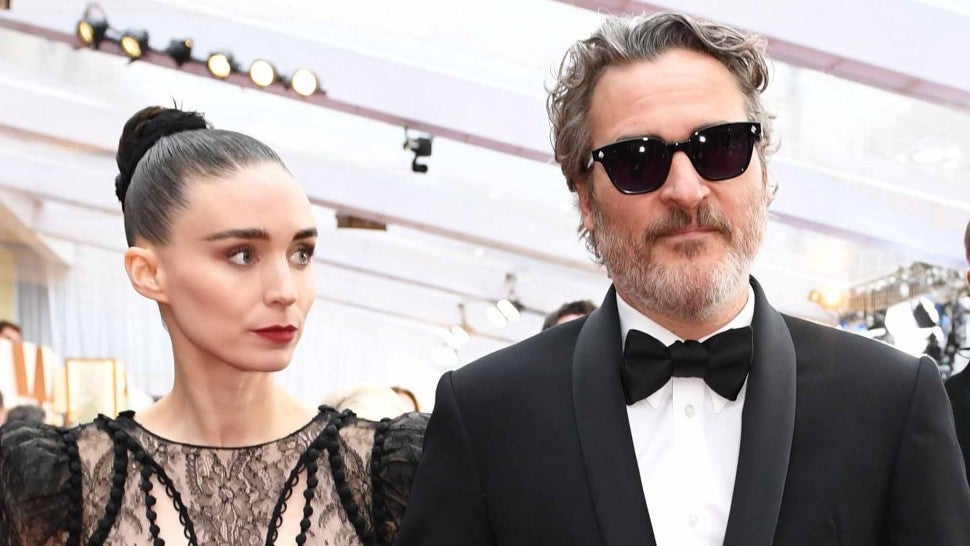 After the Oscars, where Phoenix won the Best Actor award, the vegan stars grabbed plant-based burgers from Monty’s Good Burger. “The two sat together beaming with happiness and basking in the glory of the night!” a source told ET. 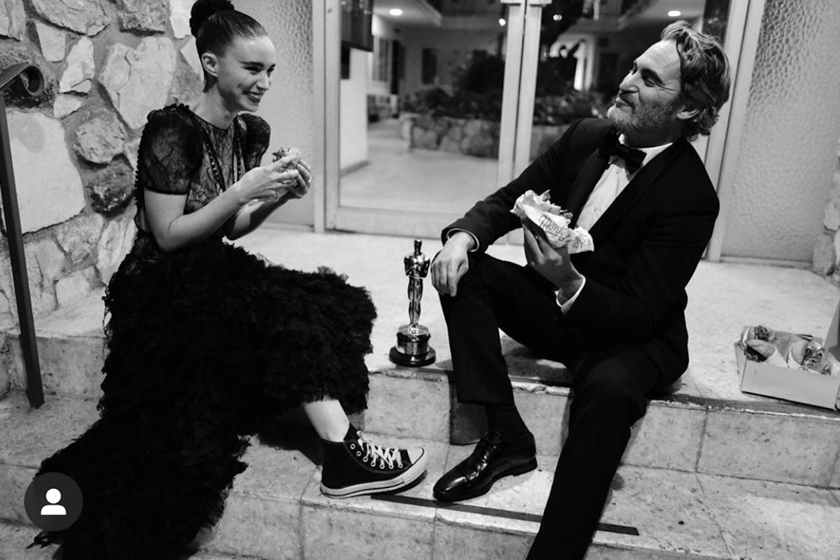 A few months after awards season, multiple outlets started reporting that Mara was pregnant with her and Phoenix’s first child. According to Page Six, who was first to report the news, the actress was already six months pregnant at the time, and had been spending her pregnancy quietly quarantining with Phoenix at their home in Los Angeles amid the coronavirus pandemic.

While addressing the audience at a Zurich Film Festival screening of Gunda, which Phoenix produced, filmmaker Victor Kossakovsky announced that Mara had given birth to a “beautiful son” River, named after Phoenix’s late brother.

🚨 Viktor Kossakovsky 📽️, Gunda: He just had a baby Boy who's Called River. ( about Joaquin) pic.twitter.com/WuUISnuTsZ

River Phoenix, a musician and Oscar-nominated actor known for films like Stand by Me and My Own Private Idaho, died at 23 of a drug overdose outside of the Viper Room in West Hollywood in 1993. Joaquin Phoenix, who was 19 at the time, was by his side.

For more with Joaquin Phoenix, check out his press room interview following the 2020 Golden Globes.