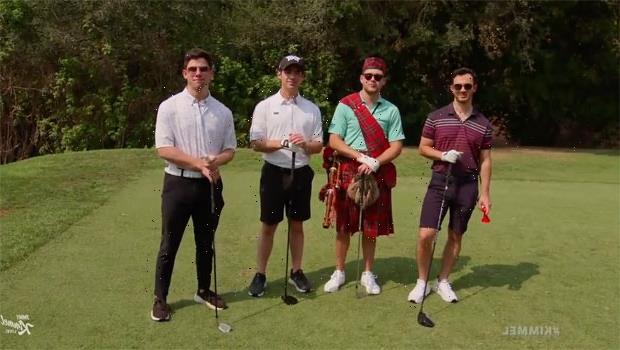 During a golf game with the Jonas Brothers for a ‘Jimmy Kimmel Live’ segment, Niall Horan suffered a wardrobe malfunction and flashed the siblings.

The Jonas Brothers got more than they bargained for during a golf game with Niall Horan. Brothers Joe, Nick, and Kevin Jonas joined the former One Direction musician, 27, for golf on a segment for Jimmy Kimmel Live on August 24. The game called for the foursome to partake in random dares during the game, including wearing a kilt for Niall, who experienced a wardrobe malfunction that involved flashing his golf buddies on the course.

Before beginning the game, all four players had to draw balls from a round spinning machine with silly instructions written on them. “Since we’re such good golfers we thought it’d be only fair if we were to play golf, we would handicap ourselves,” Niall said to the brothers. “So in the Wheel Of Stupidity here, we’ve got some balls with handicaps on them and we’ve got to do what it says.”

The Irish singer-songwriter was the first to spin the “Wheel of Stupidity,” learning that he had to play in a red kilt with a matching hat and a set of bagpipes. (Joe, for his part, quipped, “Of course the Celtic guy gets that one.”) At around the 4:30 minute mark, the ensemble becomes too much as Niall squats and exposes his private parts under the kilt. “You know the rules here,” Kevin says after the wardrobe malfunction, to which Niall lightly laughs and apologizes for the NSFW moment. 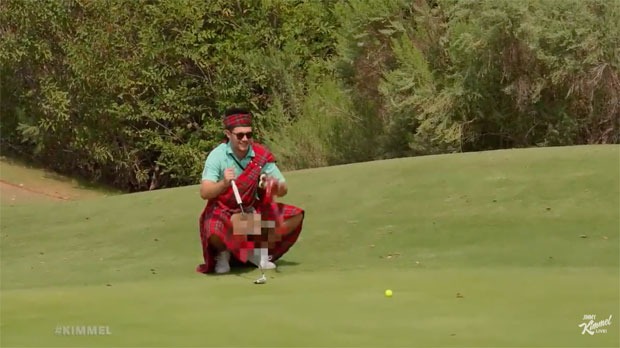 As for the brothers’ own dares, Nick had to play the game with his golf club covered in lubricant, while Joe had to spin around several times before hitting his ball, resulting in major dizziness. Meanwhile, Kevin had to play the game while the others blew loud air horns in an effort to distract. Despite his wardrobe malfunction, Niall emerged victorious during the game.

Niall served as guest host for the latest episode of Jimmy Kimmel Live, which has been accommodating a slew of other stars during host Jimmy Kimmel‘s brief hiatus. During Niall’s episode, Lizzo dialed in as a guest and the two engaged in some flirtatious banter. The duo discussed their respective fanbase names (“The Lizzbians” for Lizzo fans and “Horan Dogs” for Niall fans), and Lizzo joked, “I think you’re giving me a one erection, baby.”