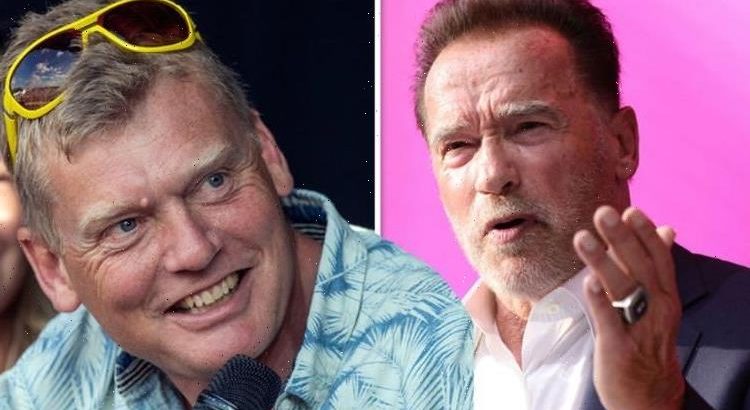 Tom Heap presents BBC Radio’s climate change podcast 39 Ways To Save The Planet and recently released his book with the same name. The Countryfile presenter credited Arnold Schwarzenegger, 74, as he opened up about an unlikely meeting with the Hollywood actor.

When the 55-year-old is not serving as an investigative reporter and delving into the big issues which have affected the countryside on BBC’s Countryfile, he is sharing the successes in the world’s fight against the climate crisis.

Climate change has become an increasingly urgent discussion in recent years and world leaders gathered earlier this month for the Cop26 conference in Glasgow to address the global crisis.

Tom has offered his own take on the environment in his new book as the author admitted he is more concerned with the public acknowledging the progress that is being made in combating the issue.

The BBC presenter revealed that he approached Arnold to take part in his latest offering as the pair share common ground on environmental issues.

Tom explained: “Yes, I contacted his people. It’s not very well known here but within environmental circles, it’s known that Arnold did some impressive things as Governor of California.

“He has kept up with that interest and with action when he can since leaving office.”

He continued: “What I wanted was someone who had interesting things to say and a genuine reputation of the environment space but didn’t come from the more predictable or more familiar environmental side.

“Because frankly, he reaches the parts that other people in the environment world might not.”

Tom’s book includes a foreword from Arnold who has been a keen advocate in combating environmental change through legislation in the United States.

“I know he is a good name on the cover, let’s not quibble but also because he has interesting things to say and comes from a different space,” he explained.

“We need so many different ways to tackle climate change. There are also different political ways.”

Tom went on: “Some people sign up [to climate change] for a sacrificial agenda. You know, we have to give up stuff, we have to change our lives. I think there is room for that.

“But [Arnold] doesn’t come from that era at all. He said, we can do this through smarts, technology, adaptation. He is not putting denial and sacrifice in the shop window.”

“He’s putting in adaptation and wealth. One of the points he made, since California brought in these tough environmental regulations, is that their economy has outperformed much of the rest of the United States,” Tom said.

He added: “To quote Arnold, he said, ‘Leaders who tell you that you can’t help your economy and have tougher environmental regulations are either stupid, liars, or lack the b***s to change.'”

The small-screen star’s new book is filled with real-world solutions to help tackle climate change which is currently taking place.

The informative book covers logical solutions that are making our planet greener each day.

Tom explained that why the perils of climate change are crucial to be aware of, it’s equally important that the public are aware of the positive progress that is being made by different people and sectors throughout the world.

“Tackling climate change essentially means changing the way society and our economy works, so that it is not dependent on burning fossil fuels which is what it really has been pinned on for the last hundreds of years,” he commented.

“There is more than one narrative that needs to be articulated. The narrative of peril coupled with doom and gloom is important and is true, but it doesn’t work for a large section of the population and it isn’t the whole story.”