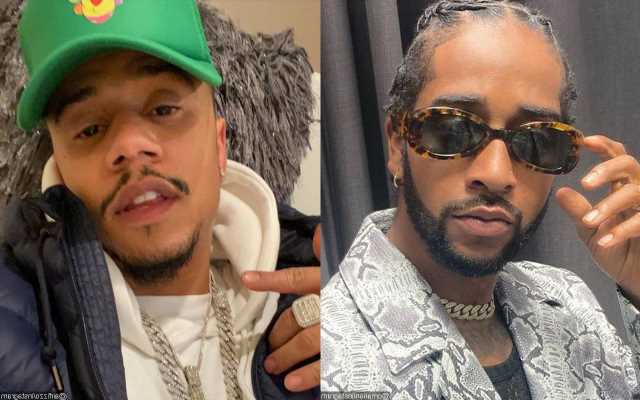 Fizz publicly apologized to Omarion for his relationship with Apryl Jones, the mother of Omarion’s child, during B2K’s appearance at the Millennium Tour at L.A.’s The Forum.

AceShowbiz –Omarion is reflecting on his former bandmate Lil Fizz‘s onstage apology for dating Apryl Jones, the mother of Omarion’s child. In a new interview, the B2K rapper weighed in on the matter when he was at LAX.

When asked about how he felt following the apology, Omarion told TMZ cameraman, “Nothing is expected, you know what I’m saying.” He then added, It was definitely appropriate.”

Fizz publicly apologized to Omarion for his relationship with Apryl during B2K’s appearance at the Millennium Tour at L.A.’s The Forum on Friday, October 2. “I don’t think it would be right if I didn’t take this moment, bro, to publicly apologize to you. I did some f**ked up s**t to my brother and I’m not proud of it, man,” Fizz said while on stage.

“So I want to stand here, humbly, and sincerely apologize to you for any turmoil or dysfunction I caused between you and your family,” he continued. Accepting the apology, Omarion replied that it was “all good” before continuing the show.

The official Instagram account of B2K then shared a clip of the moment. “It takes a real man to apologize in front of the world and admit their wrongs. The winners of last night. #Boys4Life,” so it wrote in the caption.

Fizz and Apryl confirmed report that they were dating during “Love & Hip Hop: Hollywood” reunion back in 2019. The couple, however, broke up a few months later.

Back to Omarion, he also talked about Lizzo showing love for Chris Brown. “That’s what’s up. Love is love. Love is love in 2021. If you’re not expressing it, what are you even doing? You’re probably hating. Love is love. I think you can show it and you can receive it.”