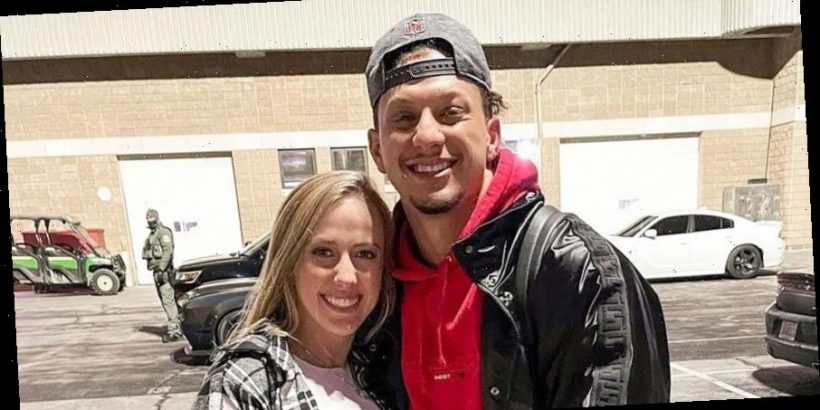 Not having it! Patrick Mahomes’ pregnant fiancée, Brittany Matthews, tweeted throughout Super Bowl LV on Sunday, February 7, and was not thrilled about others’ comments regarding her soon-to-be husband.

When ESPN shared a close-up photo of Mahomes, 25, looking sad, she tweeted, “Cool ESPN, love the support of a major sports platform for one of the best players in the league.” She then used multiple corn emojis and added “yyyy.”

The personal trainer, also 25, also called out SportsCenter after they posted another awkward photo of the quarterback. “Y’all are [trash can emojis] for this too, but he looks damn good to me,” she wrote.

The Chiefs ultimately lost 31-9, but Matthews still celebrated Mahomes’ success. “Not how we wanted it to end, but 15 played his heart out and I’m always and forever proud of him in everything he does,” she wrote after the game ended. “Now let’s have a baby!”

Mahomes’ mother, Randi Mahomes, also tweeted during the game, claiming that the umpires favored the Tampa Bay Buccaneers — and directing her comment toward Tom Brady‘s wife, Gisele Bündchen. “If you have to have the ref on your team is that really winning!!! @giseleofficial lol,” she wrote.

Following the game, Patrick opened up about the tough loss in a press conference. “They were the better team today. They beat us pretty good, the worst I think I’ve been beaten in a long time,” the athlete told reporters. “They took away our deep stuff. They took away the sidelines and they did a good job of rallying to the football and making tackles. We weren’t executing early, had a few miscues. Guys weren’t on the same page. Credit to them. They played a heck of a game defensively and offensively to beat us.’”

Watch All of Your Favorite Stars’ 2021 Super Bowl Commercials

Luckily, he still has a lot to look forward to! The former baseball player and Matthews, who have been dating since they were in high school together in Whitehouse, Texas, got engaged in September 2020, the day he received his Super Bowl LIV championship win. Weeks later, they announced they’re expecting their first child.

“Mom & Dad, taking a small detour to the wedding,” she wrote via Instagram at the time, sharing pics of Patrick holding her stomach. They later revealed they’re expecting a little girl after their dogs, Steel and Silver, walked across white paper with pink paint on their paws.