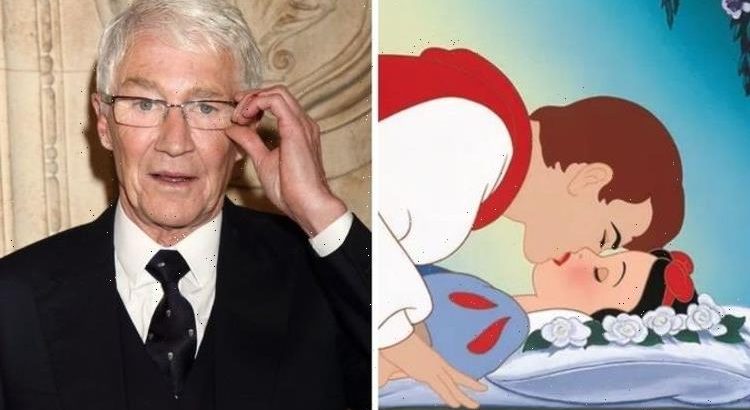 Affable comedian Paul O’Grady, 66, returns to our screens this evening from the Battersea Dogs and Cats Home. As the proud owner of three rescue dogs, he knows all too well just how strong of a bond humans can have with ‘man’s best friend’. The latest instalment of ITV show ‘Paul O’Grady: For the Love of Dogs’ sees him return to help blind Bichon cope without her sight. Paul also becomes enthralled by a mysterious, bald, rare breed of cat, and helps a cockapoo to de-stress.

Paul’s work along the years has seen him present a range of television and radio shows, notably ‘The Paul O’Grady Show’, which aired in teatime and prime-time slots.

He is known for having strong opinions.

He took aim at the Conservative-Liberal Democrat coalition under David Cameron’s premiership, labelling them “absolutely disgusting”.

Earlier this year, Paul voiced his opinion as Disneyland drew criticism for a Snow White ride at the theme park.

The ride had faced criticism from the woke brigade over a scene from the 1937 film, in which the Prince kisses the sleeping Princess.

He took to Instagram to voice his opinion: “I hear there’s been some fuss about a new Snow White ride at Disneyland because the Prince breaks the curse and wakes Snow White up with love’s first non-consensual kiss.

“Fairy tales are gruesome and if you’re going to object to a kiss then it’s time to take a look at Ms White’s psychopath of a stepmother.”

He was, of course, referring to the ‘Evil Queen’, the main antagonist of the fairytale.

She is Snow White’s vindictive stepmother, obsessed with being “the fairest in the land”.

Snow White’s beauty stirs jealousy from the Queen, so she devises a series of plans to kill her through the use of witchcraft.

Paul continued: “A jealous narcissist who dabbles in demonology and takes advice from a mirror and who orders her henchman to take Snow into the forest, murder her in cold blood, cut her heart out and then bring it back so she can indulge in a spot of cannibalism and have it for her tea.

“In the meantime Snow White having survived the forest, has ended up as a domestic servant keeping house for seven miners.

“Guaranteed she has help from the animals of the forest, although I couldn’t see the squirrels’ method of washing the dishes by licking them clean likely to get past the Health and Safety lot.”

In the classic fairytale, Snow White is poisoned by the Evil Queen and falls into a comatose state.

Prince Charming arrives, and ‘true love’s kiss’ breaks the spell, waking her from her deep sleep and the two live happily ever after.

Addressing the issue in an article on SFGate back in May, they said: “The new grand finale of Snow White’s Enchanted Wish is the moment when the Prince finds Snow White asleep under the Evil Queen’s spell and gives her ‘true love’s kiss’ to release her from the enchantment.

“A kiss he gives to her without her consent, while she’s asleep, which cannot possibly be true love if only one person knows it’s happening.

“Haven’t we already agreed that consent in early Disney movies is a major issue?

“That teaching kids that kissing, when it hasn’t been established if both parties are willing to engage, is not OK?”

Paul’s Instagram post addressed this: “It’s a fairy tale and not real life and the kiss that’s caused all the fuss was only a peck on the lips and hardly a full on snog, there’s no tongues or owt like that.

“When I was a kid I just believed that the grieving prince giving Snow White a kiss was simply his way of paying his respects and nothing else.”

Later in the post, Paul said the kiss is unlikely to happen in future pantomime performances as a result of the coronavirus pandemic.

He finished: “I suppose the Prince will have to shout down her ear hole or give her a good shove to wake her.

“Not very romantic but I suppose it’ll do the job.”