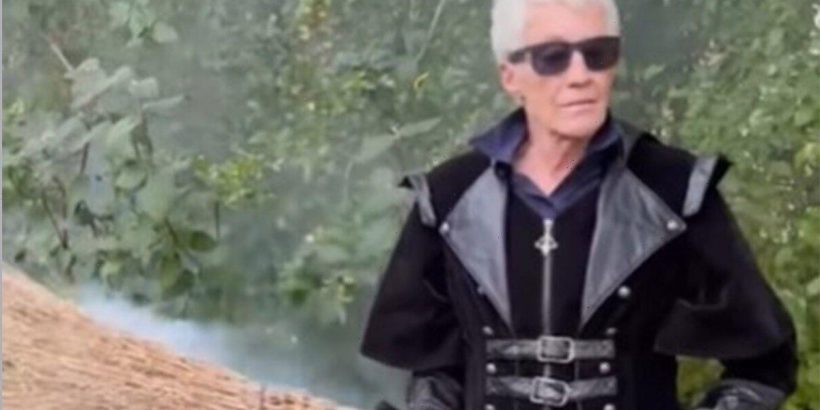 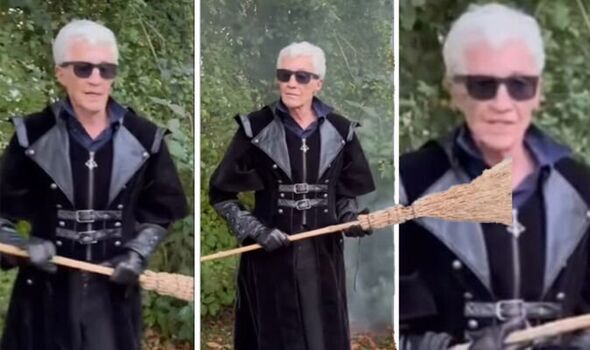 Posting the video to his 713,000 videos, Paul was seen storming out of camera shot with his smoking broomstick after pretending that his “engine had overheated”. The beloved presenter and former Drag Queen wrote in the caption of the post: “Happy Halloween or to the enlightened, Happy Samhain I was supposed to be going out but the transport has let me down. #samhain #halloween.”

Paul O’Grady, 67, posed for an Instagram video in a long black velour cloak with leather gloves and a purple shirt poking out the top. The comedian and television personality also held a small broomstick which had plumes of smoke coming out the end of it.

Covering his eyes with dark sunglasses, Paul acted the part as he said his “engine had overheated” when on his way to a “gathering”.

In the video Paul is heard saying: “I was supposed to go to a little gathering tonight but as you can see, my engine has overheated.

“I will have to get the bus.” Storming out of shot, Paul is heard quietly muttering: “P***ed off” before the video ends.

The video brought joy to fans and many celebrity faces, who took to the comments section. Presenter Gaby Roslin commented: “Best video yet,” and user debz.1976 added: “I absolutely love this guy! Never fails to make me laugh, would love a night out with him!”

Paul O’Grady dressed in a gothic robe to celebrate Halloween

In his funny video Paul is dressed in the most remarkable velour black robe. The detailed costume featured buckles on his chest and a large decorative pendant attached to a zip. The robe features two large leather pieces on the chest and sleeves, and is almost floor length. Accessorising the look, Paul wore dark glasses and leather gloves.

Writing in his caption “to the enlightened Happy Samhain” Paul referred to the Gaelic festival which marks the end of the harvest season and the beginning of winter. Held on November 1, celebrations of Samhain typically take place on the evening of October 31, the same as Halloween.1

Paul O’Grady’s Halloween video was dubbed the “best yet”

Going along with the joke, many of Paul’s fans joined in the fun, taking to the comments section of the video to show it some love. Gaining more than 14,000 views, one of those who thought the video was worth commenting on was Gaby Roslin, who wrote: “Best video yet” followed by two laughing face emojis.

Along with celebrities like Gaby Roslin, fans of the star also commented to shadow their support for the video. One user, jacquelinenorlem, commented: “They just don’t make brooms like they used to.” And another, samflack22, added: “I’m sure with that model you can just wait five minutes and it will start up again.”

Before posting his own Halloween video, Paul shared an image of his beloved dog Buster getting into the spirit. The pooch was pictured wearing a small witches hat, a neckerchief and a small version of Paul’s broomstick was placed in front of him. The caption read: “Buster always loved Halloween. Here he is after a long night at the Canine Coven. #halloween.”

Usurping the role of Miss Hannigan in the iconic musical Annie after he first played the character in 1998, Paul shared an image of him in full costume on his Instagram a while back. Showing he is a fan of musical theatre, and with a successful career as Lily Savage behind him, Paul captioned the image: “Miss Hannigan rides again, hungover and mean.”