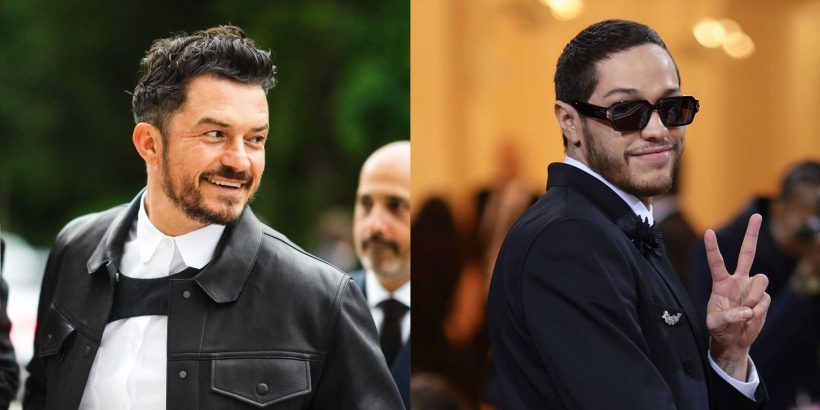 So a few quick updates about Pete Davidson for ya. First, he continues to be beloved by just about every celebrity who meets him (Orlando Bloom and Martha Stewart are both now members of the official Pete Davidson fan club now, it seems). Second, he’s been getting some new A-list romance advice in the wake of his breakup from Kim Kardashian and that advice might include them getting back together at some point, if you’re shipping them together to the end.

Let’s start with Orlando Bloom and the relationship advice, which must be discussed together since it’s Orlando Bloom giving said relationship advice. The actor and comedian have been working together in Australia filming their upcoming movie Wizards! and have apparently bonded in a big way on set—or at least bonded enough for Pete to confide in Orlando about how he’s been feeling since his and Kim’s big split.

“Orlando and Pete have become very close these past several weeks so Pete felt comfortable opening up to him,” a source told Hollywood Life. Orlando’s main tip is for Pete “to focus on doing him for the time being” — and then, it sounds like *possibly* try to get back with Kim once he’s no longer working on the opposite side of the planet from where her entire life is based.

“Once he goes back home, if he wants, he can try to work to repair their relationship. Until then, Orlando explained to just give Kim some space and reconnect when the time feels right,” the source added.

In the words of Katy Perry (words that are, importantly, directly about Orlando Bloom), it’s never really over, right?

Oh, and for those of you who are still here because you’re waiting for the hot Pete Davidson/Martha Stewart goss, I haven’t forgotten about you. While Martha was in Las Vegas for the opening of her new restaurant this week, she was asked is she had any plans to make a move on Pete, now that his BDE is back on the market (because they were pictured holding hands at the White House Correspondents’ Dinner, apparently). Her answer was pretty much a big nope—even though she does love him like literal fam.

“Pete Davidson is like the son I never had,” she told The Daily Mail. “He is a charming boy who is finding his way. I’ve invited him to come on my podcast and I look forward to hearing what he has to say.”

And that concludes today’s new business about Pete Davidson being the most popular man on the planet.