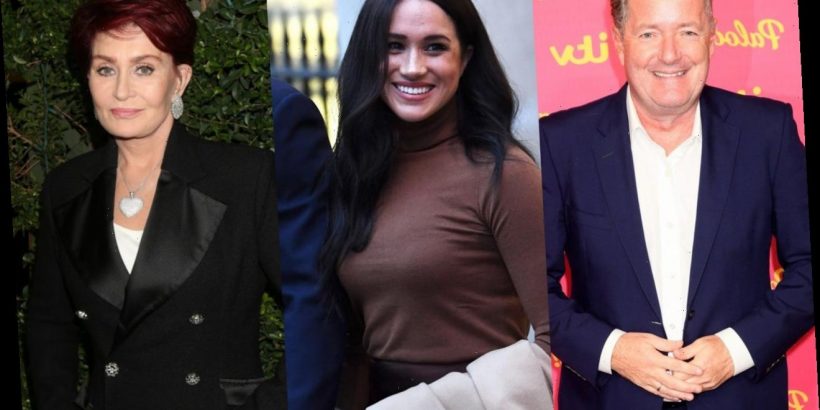 The British TV personality also claims that ‘Meghan’s had no worse media treatment’ than Princess Diana, adding that his children receive death threats in the aftermath of his backlash.

AceShowbiz –Piers Morgan has reacted to Sharon Osbourne‘s departure from “The Talk” after the latter defended him for his controversial remarks about Meghan Markle. Writing in a column for the Mail on Sunday, Piers jumped into his pal’s defense while further condemning the Duchess of Sussex in the process.

“What’s happened to Sharon and me in the past fortnight isn’t really about Ms. Markle,” so Piers penned, before adding that Meghan was exploiting “woke world view” and “cancel culture” with her bombshell interview with Oprah Winfrey. “It’s about a far bigger issue than one delusional Duchess, and that’s everyone’s right to be free to express our honestly held opinions, forcefully and passionately if we feel like it.”

He also claimed that “Meghan’s had no worse media treatment than other Royal brides such as Diana, Fergie, Kate, Camilla or even that other Monarchy-rattling American divorcee, Wallis Simpson.” He added, “But she’s the first to claim negative press has been motivated by racism, and it’s a very dangerous charge to make with so little to back it up.”

The TV personality also claimed that his children were being harassed in the aftermath of his backlash for saying that he didn’t believe what Meghan said in the interview, including her allegations about racism among the royals. “My three sons told me they too are all being targeted, and sent me screenshots of venomous abuse and threats of violence towards them, which made my stomach churn, especially as police are already investigating a death threat made to me and my eldest boy Spencer last month,” Piers detailed.

“None of them even care about Meghan Markle, let alone agree with my views on her. Yet the Twitter troll mob has found them guilty by association. One troll vowed to murder me in front of them, and added: ‘When your dad dies, the world will have a party,’ ” he continued.

His piece arrived after Piers called Sharon’s departure from the show something that CBS has to be shamed for. “What’s happened to @MrsSOsbourne is an absolute disgrace that shames CBS,” he tweeted on Saturday, March 27. “Bullied out of her job for defending me against an invented slur of racism because I don’t believe a liar. In tomorrow’s Mail on Sunday, I’ll tell MY truth about this woke cancel culture bulls*t.”

CBS announced Sharon’s departure from “The Talk” in a statement on Friday. “Sharon Osbourne has decided to leave ‘The Talk’. The events of the March 10 broadcast were upsetting to everyone involved, including the audience watching at home,” the statement read. “As part of our review, we concluded that Sharon’s behavior toward her co-hosts during the March 10 episode did not align with our values for a respectful workplace.”

Shutting down Sharon’s claims about being “blindsided” by producers, the statement continued to read, “We also did not find any evidence that CBS executives orchestrated the discussion or blindsided any of the hosts.” It added, “At the same time, we acknowledge the Network and Studio teams, as well as the showrunners, are accountable for what happened during that broadcast as it was clear the co-hosts were not properly prepared by the staff for a complex and sensitive discussion involving race.”