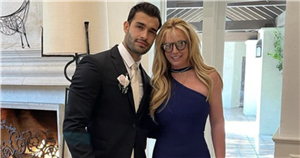 Sam Asghari has broken his silence after his other half Britney Spears appeared to announce she's expecting her first child with him.

The 40 year old Oops! I Did It Again hitmaker took to her Instagram to share the news, explaining that Sam, 28, encouraged her to take a pregnancy test after she noticed a change in her weight.

"I lost so much weight to go on my Maui trip only to gain it back. I thought “Geez … what happened to my stomach ???," she wrote. Britney continued: "My husband said “No you’re food pregnant silly!!!” So I got a pregnancy test … and uhhhhh well … I am having a baby … 4 days later I got a little more food pregnant."

Now, Sam has spoken out on the news as he posted a photo of two lions with their foreheads touching as they look lovingly down at their little cub.

"Marriage and kids are a natural part of a strong relationship filled with love and respect," he started his post before continuing: "Fatherhood is something i have always looked forward to and i don’t take lightly."

"It is the most important job i will ever do," he added with a praying hands emoji.

Celebrity friends have since shared their congratulations to the happy couple, including Paris Hilton, who said: "Congratulations sis!! I’m so excited for you!! Love you!!!" followed by a celebration emoji, a heart eyes emoji and a hearts emoji.

Britney is also mum to grown up kids Jayden, 15, and Sean, 16, who she had with ex Kevin Federline.

The singer and her fitness trainer beau Sam have been together since 2016 after meeting on the set of her ‘Slumber Party’ music video.

Sam popped the question after getting down on one knee last September and while they are yet to confirm whether they are married, she has often referred to Sam as her "husband".

Things are looking great for the star on the professional front as well as she has reportedly signed a massive book deal to share the story of her conservatorship.

Britney's conservatorship ended after 13 years in November 2021 as Judge Brenda Penny told the Californian court: "The conservatorship of the person and the estate of Britney Jean Spears is hereby terminated."

For the first time since 2008, Britney is able to make her own medical, financial and personal decisions without consulting one of her conservators.

For all your updates on Britney Spears and Sam Asghari, sign up to our daily OK! newsletter.