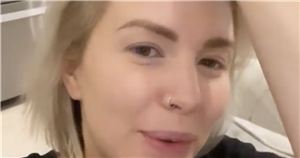 Oliva Bowen shared with followers on Thursday 6 January that she felt “out of depth” buying baby clothes in preparation for her first child.

The 28 year old announced that she was pregnant last month and, while she appeared excited on Instagram Stories about becoming a parent, opened up about being nervous at the same time.

After showing off a cute Star Wars-themed romper newly-bought for the baby, a make-up free Olivia admitted in a video clip that she felt out of control in the midst of trying to process this new chapter she was embarking on.

“Obviously I like to be in control so I like to know like what I’m doing and obviously this is something that you can’t really completely prepare for. “

The former Love Island star said that, despite feeling cagey about baby buying, she did manage to get a few items with husband Alex Bowen and even signed up to a hypnobirthing course.

Olivia also praised her close friends in the clip — many of which are parents already — who were on helping hand to give her advice on baby arrangements.

“I’m very lucky because a few of my close friends have babies and they’ve been sending me lists letting me ask them the most invasive questions, so it definitely helps talking to them,” the mum-to-be revealed.

Olivia described preparing for her first child a “daunting” experience as she said she hadn’t yet got to grips with the fact that she will become a mum soon.

“I think it is super daunting because it's literally a whole new world that I’ve never been interested in before, I’ve never really looked at before," she said.

“I’m not good when I don’t know what I’m talking about, I find it really hard I just feel really out of control.

“Obviously, it’s such a nice feeling but it’s just so new.”

Olivia told her followers she still felt “so overwhelmed” after the many messages she received following the announcement of her pregnancy, and found the whole situation “funny to get [her] head round”, adding: “I’ve known we always wanted to have a baby eventually, I just like. I think it doesn’t compute when it happens.”

The media personality declared that she hoped to start designing the nursery next week after promising with husband Alex that they start preparing for the arrival of their first child in the New Year.