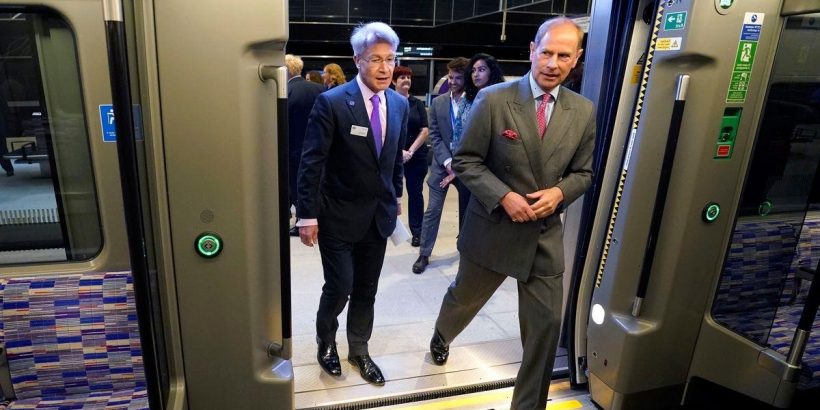 Prince Edward stunned commuters as he boarded a busy tube service in central London this week.

However royal sources say it is "not uncommon" for the Earl of Wessex to use the London underground to travel around the capital.

Dressed in a suit, The Earl, 58, blended in with fellow passengers after hopping on a Jubilee Line service on Monday.

The Prince, who is the Queen's third child and is ninth in line to the throne, had previously spent the day celebrating those who had won the Duke of Edinburgh's Gold Award.

The Earl has taken over many of the royal responsibilities for the long-running development programme, started by his late father Prince Philip in 1956 and which is one of his great legacies following his death last year, helping millions of young people around the world.

Following the event Edward was seen boarding a train at Green Park station, close to Buckingham Palace, alighting at Waterloo station just two stops away in a journey that can take as little as three minutes.

During the short journey, the Earl, who was holding an umbrella and a bag, was seen to be in conversation with another man, holding a similar umbrella.

A spokesman for the Royal Family later confirmed the Earl was on the underground saying: "It’s not uncommon for him to catch the tube" reports the Mirror.

The following day, Edward was then on the underground again when he accompanied The Queen to officially open the network's new Elizabeth Line at Paddington Station.

The Earl had been scheduled to represent the royal family at the grand opening alone but in a last-minute surprise, the monarch, who last week missed the State Opening of Parliament for the first time in over half a century due to mobility problems, also decided to attend in person.

Buckingham Palace described it as a "happy development" and said the organisers were made aware that she may attend.

Using a walking stick, she was greeted by Prime Minister Boris Johnson, the Mayor of London Sadiq Khan, the Secretary of State for Transport Grant Shapps, and the Commissioner for Transport for London Andy Byford before unveiling a plaque to mark the line’s official opening.

She smiled at workers who handed her an Oyster card – a pre-paid transport payment card used by many Londoners – whilst they also showed her to use one of their ticket machines.

She then proceeded through the ticket barriers and down to the new Elizabeth Line platform where she was informed about the design of the new trains and stations which form part of it.

The Queen spent around 10 minutes in the station before leaving, escorted by Prince Edward.

The Earl then returned for a return journey on the railway from Paddington to Tottenham Court Road.

He chatted to a driver as the train moved and said after stepping off: "That was brilliant. I did enjoy that. It was good fun" according to the BBC.

The delayed project, previously known as Crossrail will open to the public on May 24.

For your latest royal news, sign up to OK!'s weekly Royal newsletter here.