Prince William and Kate Middleton are mourning the loss of an important member of the family: their dog Lupo.

The couple announced on Sunday that Lupo had passed away the previous weekend after nine long years as their faithful pet.

They posted a tribute to the cocker spaniel on social media. “Very sadly last weekend our dear dog, Lupo, passed away. He has been at the heart of our family for the past nine years and we will miss him so much. – W & C,” the Duke and Duchess of Cambridge wrote. 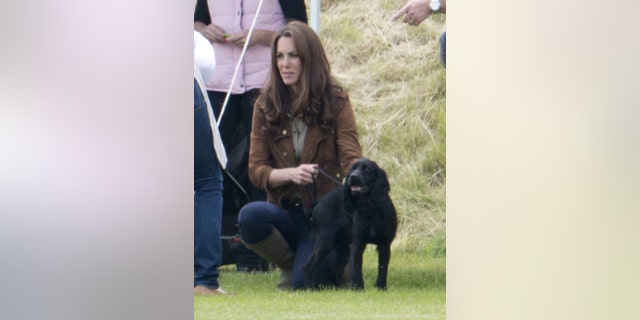 Catherine, Duchess of Cambridge, and Lupo at a polo match in 2012.
(Mark Cuthbert/UK Press via Getty Images)

“It is with great sadness that Lupo, the beloved dog of my sister Catherine and her family has passed away. Lupo was the son of Ella, brother to Zulu, Inka & Luna,” the 33-year-old captioned below a photo of the dog. “Nothing can ever prepare you for the loss of a dog. For those who have never had a dog, it might be hard to understand the loss. However for those who have loved a dog know the truth: a dog is not just a pet; it is a member of the family, a best friend, a loyal companion, a teacher and a therapist.”

“There isn’t much of a rule book on how to grieve for a dog, but I’ve said a prayer, lit a candle and taken Ella (Mum) for a long walk to spend time remembering Lupo. Rest in peace Lupo. Tilly & Mini will be waiting for you. You will always be remembered and your legacy will live on forever. Good Boy," he concluded.

Royal family members are avid dog lovers. Queen Elizabeth is known for having multiple corgis and labradors while Prince Harry and Meghan Markle also have two canines, an adopted black lab and a rescue beagle that live with them in Los Angeles.