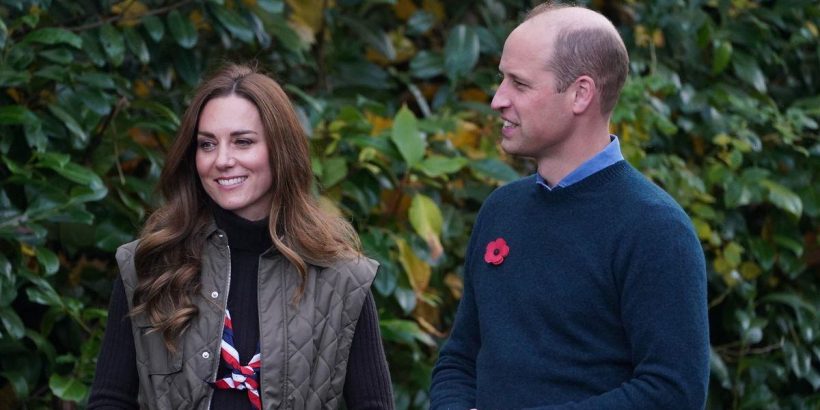 Kate Middleton and Prince William have been snapped showing their support for a Scouts campaign in Glasgow on Monday 1 November.

William and Kate attended the youth group's #PromiseToThePlanet campaign in Dennistoun, Glasgow and met with Scouts from across the area and learn more about their environmental work.

The Duke and Duchess of Cambridge, both 39, were dressed casually at the event, where they met with children who have been involved in environmental action and community work.

Kate, who is said to have "gone to town" on Halloween celebrations over the weekend, looked simply stunning in a black ribbed long-sleeved jumper, black jeans and a khaki green quilted gilet.

Meanwhile, William wore a dark blue jumper with a blue shirt collar poking out from underneath, which he matched with a pair of navy blue trousers.

The appearance is the first engagement for the royal couple since they arrived in Glasgow for the COP26 climate conference – after their half-term holiday was interrupted last week.

Kate seemed in her element as she met Scouts and leaders from the local groups at the outdoor event.

Mum-of-three Kate previously volunteered with the Scouts and was a Brownie growing up.

She currently acts as the Joint President of the Scout Association alongside the Queen's cousin, The Duke of Kent.

Getting into the spirit of the week, which will focus on the issue of climate change, Kate opted to recycle her footwear as she was spotted in a pair of See By Chloe boots.

The Duchess has worn the designer boots on a number of occasions, and wore them at three events last year, including a visit to a community garden in January and to the Scots London headquarters in March.

The brown suede boots feature a leather trim and detailing on the round-toe lace-up base.

It comes after the Queen had to pull out of her planned appearance at the climate change summit due to doctor's orders to rest following a hospital visit last month.

A statement from Buckingham Palace, which was released last week, confirmed the news as it read: "Following advice to rest, The Queen has been undertaking light duties at Windsor Castle.

"Her Majesty has regretfully decided that she will no longer travel to Glasgow to attend the Evening Reception of COP26 on Monday, 1st November.

"Her Majesty is disappointed not to attend the reception but will deliver an address to the assembled delegates via a recorded video message."

The Queen has recorded a video message which shall be played out at the event, instead.

Kate and William will be attending the climate change conference alongside Prince Charles and Camilla.

Prince Charles addressed world leaders at the conference earlier today where he warned that tackling the climate crisis would "take trillions, not billions of dollars" and warned that the world would need "a vast, military style campaign to marshal the strength of the global private sector" to make a difference.

Stay up to date with all the latest on the Royals by signing up to OK!'s daily celebrity newsletter.