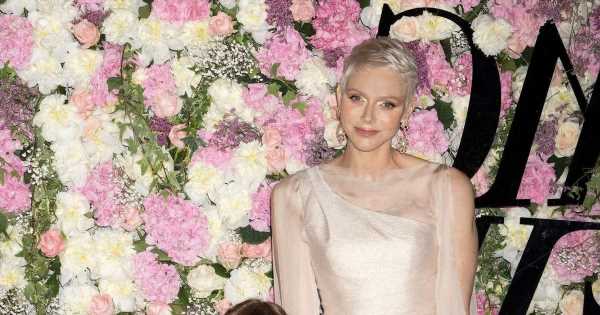 Princess Charlene of Monaco made a stunning appearance with her daughter Princess Gabriella, Countess of Carladès, as the pair attended the Monte Carlo Fashion Awards at the Opera Garnier on Tuesday.

The 44 year old looked especially glamorous at the exclusive event in one of her first few outings since returning to public life, as she wore a flowing champagne white one-shoulder gown with long sheer cut out sleeves.

Princess Charlene’s bleach blonde pixie cut complemented her dress perfectly, along with her gold-glittered eyeshadow and rosy pink blush and lipstick, which was highlighted even more by her smile.

Princess Gabriella made sure to bring just as much glamour as her mother as she sported a floral print brocade dress with a wide skirt and an embellished light pink chain handbag.

This was the seven year old’s first official engagement as a Royal, and Princess Charlene made sure to mark the special occasion as she shared a photo of herself embracing her daughter ahead of the fashion awards show.

As she posted the snap on Instagram, she wrote: “I loved every moment preparing my Princess for her first official event. We’re looking forward to a great evening at the fashion awards.”

Princess Charlene’s appearance with her daughter comes after she recently returned home to Monaco after taking four months out from public life as she stayed at a Swiss treatment facility, where she was treated for emotional and physical exhaustion.

She was seen for the first time since taking a break in March as she went back to her family, which includes Princess Gabriella and twin brother Jacques, Hereditary Prince of Monaco, Marquis of Baux, and her husband Albert II, Prince of Monaco.

The 64 year old was spotted with his son at the traditional Star Team charity football match as mother and daughter enjoyed themselves at the awards event.

Discussing his children’s introduction into public life last year, Prince Albert told People magazine: "Our parents took us on official trips early, but we didn't feel they were official trips.

"When we were young, they would go off and do some sort of serious thing. Then they would be with us in the off-time. There was a lot of value to that."

"Jacques and Gabriella are still at the age when there's an awful lot of discovery, right and left, on these kinds of trips," he added.

"It's fabulous to have these kinds of memories with them."