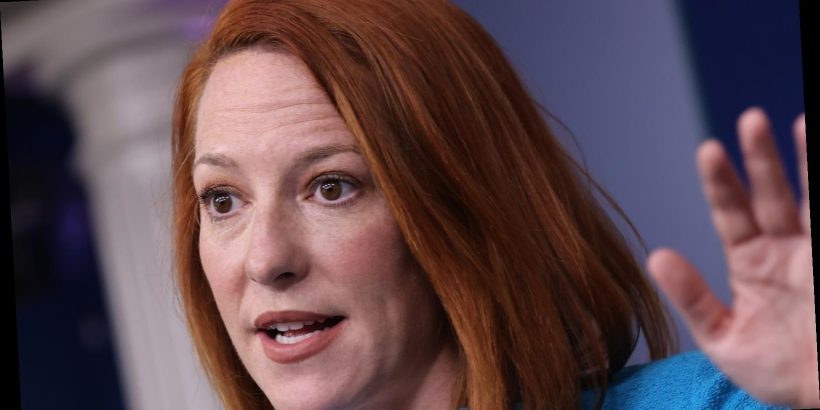 White House press secretary Jen Psaki has spoken out after President Joe Biden had people worried in a video that’s gone viral on social media. Biden got the media’s attention on March 19, 2021, after he repeatedly fell up the steps while attempting to board Air Force One. In a video shared by various outlets — including the New York Post — and across social media, Biden could be seen making his way up the red stairs to the plane at Joint Base Andrews in Maryland before he made his way to Atlanta. He tripped twice and put his left hand out to catch him as he recovered before he then fell over in a more dramatic fashion which saw almost the entire left side of his body in contact with the steps. Notably, the president was holding on to the handrail with his right hand the whole time, but stood upright after his final fall before bending over to dust off his knees.

The video garnered a lot of attention online, with plenty of famous faces chiming in on the mishap. Chrissy Teigen made a joke on Twitter, writing, “We should all hope to one day trip on the way up to our personal jet.” Podcast host Jake Flores also quipped about the incident on the social media site, writing, “It’s actually good that Biden fell it means he’s ‘down’ and ‘trippin’ with the homies.” But what does Psaki have to say about the fall? Keep reading for more.

White House press secretary Jen Psaki spoke to reporters on March 22, 2021, where she was quizzed about what really happened in the viral clip. “Just checking on the president. He fell going up the stairs to Air Force One on Friday, is he doing okay?” a reporter asked in a video shared on Twitter by The Hill. Psaki replied by clarifying that 78-year-old Joe Biden is, thankfully, “100% fine” and blamed “tricky” steps for the president’s difficulty embarking on the plane. “I don’t know if you’ve been up those steps, they’re a little tricky sometimes, but he’s doing great,” she said. The reporter then asked if Biden had “to see a doctor” due to his fall, to which Psaki said, “I’m not aware of that being required… there’s of course a doctor who travels with any President of the United States, but I’m not aware of it needing actual extensive medical attention.”

Psaki’s comments came after White House deputy press secretary Karine Jean-Pierre claimed it was the wind that made the president lose his balance. “It’s pretty windy outside. It’s very windy. I almost fell coming up the steps myself,” she said on March 19, 2021, per the New York Post. The outlet cited the National Weather Service as stating that there were winds of over 20 miles an hour at Joint Base Andrews around the time Biden tripped, as well as gusts as powerful as 25 miles per hour.

This isn't the first time Joe Biden has tripped

Though it’s great to know President Joe Biden is doing okay after his viral Air Force One tripping moment, this isn’t the first time he’s lost his balance. He revealed in December 2020 that he injured his foot after tripping on a rug while playing with his dog. “Little pup dropped a ball in front of me, and for me to grab the ball,” he recalled to CNN. “I’m walking through this little alleyway to get to the bedroom, and I grabbed the ball like this and he ran. And I’m joking, running after him and grab his tail. And what happened was that he slid on a throw rug, and I tripped on the rug he slid on.” Biden was spotted with a boot on his foot for weeks after.

Biden isn’t the first person to have a little trouble with the steps of Air Force One, either — in fact, it’s proved tricky for a number of political figures before him. A video from the Associated Press shows President Ford sliding down the plane’s stairs while holding an umbrella after he arrived in rainy Vienna, Austria in June 1975. More recently, former Vice President Mike Pence also fell victim to those pesky steps in a video widely shared on social media in June 2020. It shows Pence walking up the stairs before tripping and putting both hands out as he hit the floor. Those steps certainly do look tricky!