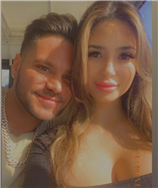 Ronnie has been down this road before, of course.

During his tumultuous relationship with Jen Harley Magro was arrested following an altercation, during which Harley called the police.

On that occasion, Ronnie managed to both avoid prison time and keep his job on Jersey Shore.

And amazingly, it now seems that he might enjoy similar results this time.

TMZ is reporting that Ronnie will not be charged with felony domestic assault.

This is a major development, as Magro is still on probation from his last arrest, and a felony conviction would have landed him behind bars for a very long time.

The decision not to charge Ron with a felony seems to be a result of the  LA County District Attorney’s Office deciding that it lacked sufficient evidence.

This likely means that Saffire decided not to testify against Ronnie.

Police say that when they arrived on the scene, they saw marks on Saffire’s body that appeared to have been made by Ronnie.

Despite thst compelling physical evidence, however, without Matos’ testimony, it might prove difficult for prosecutors to make a compelling case against Ron.

After news of Ron’s arrest went public, Saffire issued a statement in which she insisted that everything was just fine, and Magro was being unfairly persecuted in the media.

“Ronnie and I are fine,” Matos wrote on her Instagram Story.

“There is a lot of misleading information floating around out there,” she added.

“With anybody who reached out with concern I appreciate it with all my heart, but everything that’s being portrayed out there are not facts.”

“Please leave Ron and I alone,” she concluded, noticeably leaving out any firm denials or details on what happened.

“You don’t know what someone is going through at the end of the day.”

“Don’t believe everything you hear or read online.”

However, it wasn’t long after that post appeared online that Matos posted a TikTok video in which she rails against Ron and accuses him of all manner of bad behavior.

As The Ashley’s Reality Roundup reports, Saffire’s video was quickly deleted but it was live long enough that Shore fans were able to record all of its allegations.

“I was the one who took your bulls–t,” a computerized voiceover says, as photos of Saffire and Ronnie in happier times appear on the screen.

“I actually cared about you. I stuck around when everyone told me to leave. I loved you when you gave me reasons not to,” the voiceover continues.

“I was the one that was there when no one else was. But hey, I hope you sleep well.”

Needless to say, it sounds like Saffire is all over the map in regard to her feelings toward Ron.

But at this point, if she has another change of heart and decides she wants to press charges, it might be too late.

According to TMZ, Ron’s case has already beenn kicked down to the L.A. City Attorney’s Office, which means that if Ronnie gets charged at all, it’ll only be a misdemeanor.

“If this reporting is true, as we said from the beginning, initial reports and unreviewed charges are often and; in Ronnie’s case, wrong,” Magro’s attorney Scott Leemon told the site.

“We are glad the DA’s office made this decision not to charge a felony. We will await a decision from the County Attorney’s office.”

We’ll have further updates on this developing story as more information becomes available.