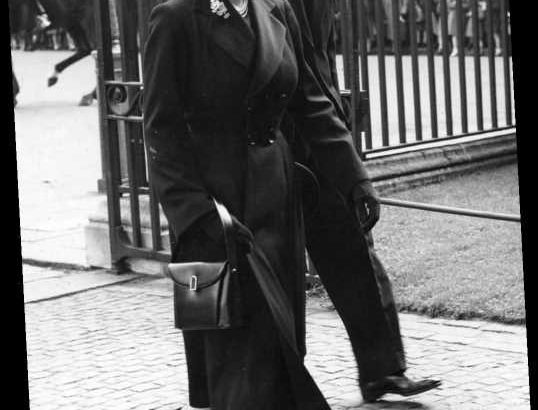 As Queen Elizabeth was mourning the death of her father, she was also stepping into her role as monarch.

The distribution of Maundy money is a tradition dating back to the 13th century, making it a fitting occasion for her monarch debut. And her husband, Prince Philip, was there by her side to support her on April 10, 1952.

As seen in footage from the occasion shared by the Royal Family’s official Twitter page on Thursday, Queen Elizabeth warmly greeted the clergy after handing out the money to 26 men and 26 women, an event which takes place annually on the Thursday before Easter. The Queen also held Nosegays, a bouquet made up of daffodils, primroses, stocks, purple statice, freesias, ivy, hebe and the herbs rosemary and thyme. The flowers were originally used to disguise odors as the monarch washed the feet of recipients.

The Queen, now 94, continues to take part in the annual tradition — and in 2019, her granddaughter Princess Eugenie assisted her in the distribution at St. George’s Chapel in Windsor Castle.

Each recipient of Maundy money – one male and one female for every year the Queen has been alive – was given two small leather purses, one red and one white. The first contains a small amount of coinage which symbolizes the monarch’s gift for food and clothing – this year in the form of newly two minted cousins: a £5 piece, commemorating the 200th anniversary of the birth of Queen Victoria and a 50p coin portraying Sherlock Holmes. The white purse contains Maundy coins up to the value of the Queen’s age. Recipients at the 2019 service were given 93p in silver Maundy coins. Early in her reign, the Queen decided Maundy money should not just be distributed to the people of London, and so she now travels to various cathedrals or abbeys to give gifts to local people. The recipients were chosen in recognition of their service to the community.

As of 2017, the Queen has now visited every Anglican Cathedral in England for the Maundy Service. Known as Accession Day, the Queen normally spends it in quiet, somber reflection at Sandringham House (this year she'll be at Windsor Castle, where she's isolating amid COVID-19), as it marks the death of her beloved father as much as the day that her public life changed forever. Around the time, she often takes part in a low-key engagement close to her estate in Norfolk.

Can’t get enough of PEOPLE‘s Royals coverage? Sign up for our free Royals newsletter to get the latest updates on Kate Middleton, Meghan Markle and more!

“By the sudden death of my dear father I am called to assume the duties and responsibilities of sovereignty,” she said in her speech to the accession council.

“My heart is too full for me to say more to you today than I shall always work as my father did throughout his reign, to advance the happiness and prosperity of my peoples, spread as they are all the world over.” In June 1953, several months after her father’s death, Elizabeth was crowned at Westminster Abbey.

The next milestone? Her 95th birthday on April 21.