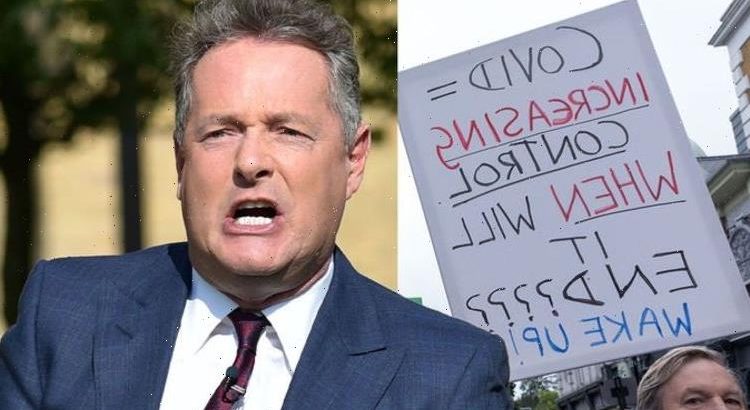 Piers Morgan, 56, has spoken out on Twitter about his anger towards people not getting the COVID-19 vaccine. The former Good Morning Britain presenter told his eight million followers that those refusing the vaccine are “selfish p****s”.

As they have no problem with history recording them as selfish p****s’.

His tweet, posted this morning said: “I’ve got no problem with those refusing to have the covid vaccines, so long as they have no problem with history recording them as selfish p****s’ who only cared about themselves in a global pandemic.”

Anti-vaxxers flooded the comments, expressing their views on why they will not take the vaccine.

GlenskiP said: “So how will you describe kids that won’t take it?

“I call them smart as natural immune response is the best protection they can have.”

“Had your booster yet?”

JDee1235 attempted to joke: “How many tweets like this are you ordered to put out a day and what’s the going rate for selling your soul nowadays?”

Shorty86mufc expressed his view: “How are people selfish?

“The vaccine doesn’t stop the spread or chance of catching Covid.

“I think it’s arrogant that people think they have the right to tell other people what to do!”

Likewise in the comments, Piers was met with many supporters, who understood Piers’ outspoken statement.

Piers, known for his explosive Twitter rants, most recently launched a huge Twitter argument when he expressed his views on protestors blocking access to the Port of Dover.

The broadcaster shared a video showing the protestors blocking the road on September 24, captioned: “Just drive over them.

“Fewer people is good for the planet. Win-win.”

On September 16 it was announced that Piers would be joining NewsCorp as a presenter on their new television show talkTV.

He also told fans that he will be working as a columnist for The Sun and New York Post.

Fans have been awaiting Piers’ next step after he famously walked off Good Morning Britain in March this year.

In an intense argument with weatherman Alex Beresford regarding the Meghan Markle and Prince Harry interview, Piers stormed off the set.

Later that day, he confirmed his exit from the morning news show.