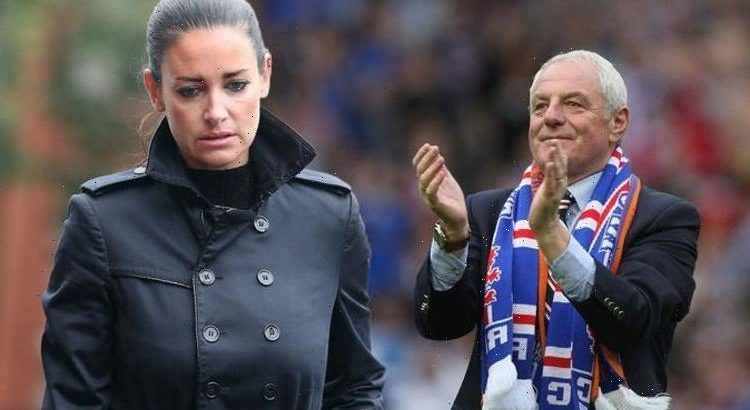 Presenter Kirsty Gallacher, 45, took to Twitter today to share her sadness over Walter Smith’s passing with her 429,200 followers. The star posted a picture of her former colleague alongside a short statement expressing her grief.

Due to her sports journalism background, Kirsty had the opportunity to work with the football manager in the past and has described him as a “great man”.

On social media she shared a picture of Walter looking smart in a suit and tie, with a Remembrance Sunday poppy pinned to his blazer.

She captioned it: “So sad to hear the news of Walter Smith’s passing.

“A great man who I was so lucky to know and to work with. Thoughts with Walter’s family.”

Walter, who died aged 73, leaves behind an admirable legacy in British football.

Kirsty soon received some heartfelt messages from her followers under the Twitter post, also expressing their sadness for the loss.

Evening Standard journalist Robert Jobson wrote: “That is so sad. I met him a couple of times.

“A true great of the game and a true gentleman.

“Very very sad day for Rangers and the whole of Scottish Football, RIP.”

“He was brilliant and brought so much to the beautiful game.

“Sad news and thoughts go to his family and friends,” added Matt Tatler.

Walter previously enjoyed two spells as manager for Glaswegian team Rangers F.C. and led the club to 10 top-flight titles, five Scottish Cups and six League Cups as well as to the UEFA Cup final in 2008.

He is the club’s second most successful manager after Bill Struth.

His death falls in the same year Rangers won their first Scottish Premiership since 2011, which was Smith’s final season in charge of the team.

Kirsty began her career at Sky Sports News in 1998 and later went back to present on the channel for seven years between 2011–2018.

She currently presents The Great British Breakfast on GB News alongside Simon McCoy, and also hosts her own live show on Smooth Radio every Saturday afternoon.