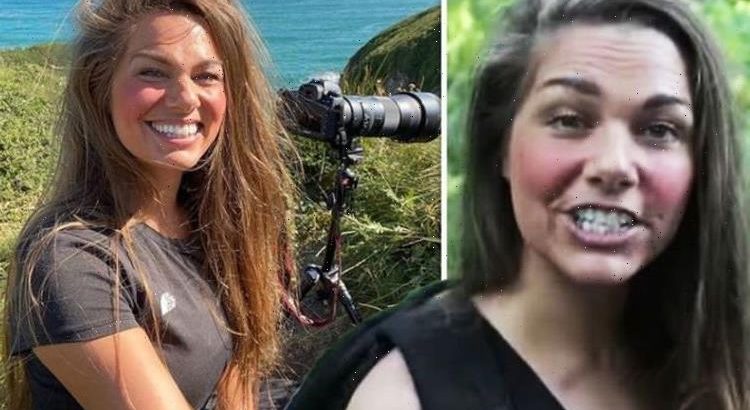 Springwatch: Chris tells Michaela she is 'not a politician'

Springwatch digital presenter Hannah Sitfall has spoken out after posting an “angry” video to Instagram earlier in the summer. Addressing the moment in an interview with Express.co.uk, the star admitted to getting frustrated at the “devastating impact” tourism has had on the environment over the past 18 months, before suggesting that people who litter should face a penalty, after asking her followers for suggestions on how to tackle the problem.

Speaking about the impact that tourism has had around where she lives, the environmentalist addressed the reality of people visiting beauty spots.

She said: “I’ve seen it first-hand where I live in Cornwall with people coming down to enjoy the beaches, which everybody should, but then the beaches are laden with rubbish and beer cans and plastic food wrapping, shopping bags.

“These can of course have devastating impacts on our local wildlife and then the wider environment so you know, it’s difficult.

“We need to have a balance and respect for nature and our wild places so that everyone can enjoy them, as if we continue to pollute them, they’ll be lost forever including our wildlife, so we all have a part to play in that,” she added.

The nature photographer went on to reveal that she ended up taking to social media in frustration over the summer when the issue was at its worst.

Hannah explained: “I actually got a bit angry in the summer and I did an Instagram Story on my personal Instagram asking my followers what they think we could actually do.”

Speaking about the responses she got, the star said she liked the idea of introducing nature wardens to areas of outstanding natural beauty.

She continued: “There was one lady that replied and she said she’d been on holiday to France and in France, they do actually have nature wardens.

“But I thought, you know, we’ve got the parking ticket, man. Why can’t we have that for green spaces?

Hannah added: “It may sound harsh, but I guarantee if there was a monetary value put on dropping litter it would significantly fall almost overnight.”

Speaking about how the nation flocked to enjoy the great outdoors over the course of the last 18 months, Hannah said she hopes the interest in nature can continue.

She went on: “I am optimistic that this newfound love will stay with people and it’s just about continually engaging them as I said, you know, everybody fell in love with the natural world and it did get them through probably the worst year that hopefully we will all experience.

“The Wildlife Trust’s 30 Days Wild campaign that runs through the month of June every year, last year was the most successful ever, ever it had 750,000 people signed up.

“That’s a monumental win for engaging people with the natural world as it gives them the resources to do the simplest things.

“And now doing events such as Great Big Green Week, [it has] over 4500 events across the UK, which can harness this newfound open interest with issues of climate change and the natural world and that’s why these events are so important.”

Research published by the Climate Coalition shows that 46 million people in the UK now rely on nature to boost their mental health, including turning to local parks, green spaces and nature spots for their wellbeing.

Addressing the statistics, Hannah explained: “People have really taken nature on board and as a conservationist, it’s amazing to see how many people have started engaging with the nature around them, whether it was a snail in their garden, or the first daffodil, there was a real overarching of love for the natural world that came about and that’s because of the pandemic.

“But now things are starting to get a little bit back to normal, I am optimistic that this newfound love will stay with a lot of people.

“When you think about it, it brought them so much happiness in a really dark and depressing time, so I’m hoping that it continues,” she added.

Great Big Green Week saw communities across the country come together in a UK-wide celebration of climate action, with over 4,500 events taking place across the nation to show their support for urgent action against climate change.