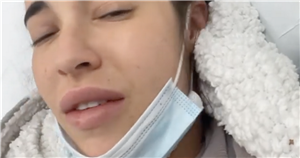 After being rushed to hospital and discovering she had Covid, ex-Hollyoaks star Stephanie Davis has posted to Instagram to update fans on her condition.

Stephanie, 28, previously told her followers how much pain she was in as she filmed herself in her hospital bed while wearing an oxygen mask but she now seems to be on the mend.

Posting to her story on Thursday, she said: "After the worst pain I've ever been in, I'm getting there now, love to you all."

Stephanie has been having a tough time recovering from Covid and in a previous Instagram Story, she was seen laying down and barely able to keep her eyes open.

"I've woke up starving and I can't wait to be able eat again. But yeah, I'm sitting her on my love. Covid has been absolutely horrific.

"Today or yesterday was the worst day yet. I'm just focusing on getting better. But thank you for all your messages. It really means a lot. I'll let you all know when I'm feeling a little better."

Stephanie is best-known for playing Sinead O’Connor in Hollyoaks until 2019.

She was rushed to the hospital last week via ambulance and quickly put on oxygen. The star then found it hard to talk and tell her fans what had happened, as she tried to update people last Thursday.

She said: "Last night I had a bit of a headache before bed and my sinuses – and I woke up so ill and had to call an ambulance basically."

The actress also explained that she initially dismissed the pain as a chest infection and didn't know she had Covid until she tested positive in the hospital.

She continued: "I'm just in so much pain – oh my god, this is horrible. It happened so quick, I don't know, I just woke up and couldn't move."

A day later, she added: "They've started me on some fluids and some painkillers to try and help the pain.

"Did anyone else have sore skin? I feel like I can't touch my skin."