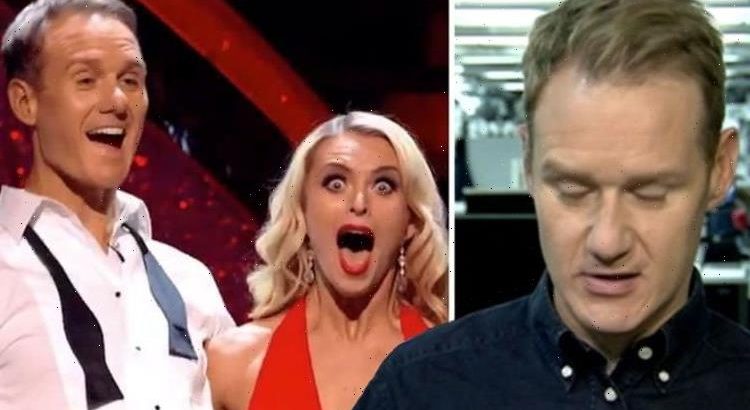 Dan Walker, 44, has reached the quarter-finals of Strictly Come Dancing alongside his dance partner Nadiya Bychkova, 32, much to the BBC Breakfast host’s delight. But it wasn’t long before the broadcaster was inundated with a flurry of criticism on social media yesterday.

One user, in particular, vented their frustrations claiming the BBC dance competition is fixed.

It comes after the official BBC Strictly account shared a clip of Dan’s joy making it through to another week.

They penned: “Now that’s a reaction! First through to next week… it’s Dan and Nadiya! #Strictly.”

Twitter user Nikki fumed: “Oh for f*** f*****g sake…I’m seriously p****d off. That is an absolute disgrace. Dan can’t dance and should’ve been voted off weeks ago. Someone who is good and who can dance is going to go now. IT’S A FIX.”

Dan reacted to the post as he questioned claims of a BBC show fix.

In view of his 735,000 followers, he said: “I genuinely can’t understand how you can get so angry about it Nikki. I hope it hasn’t ruined your weekend.”

Nikki replied: “Because, you’re a nice guy Dan, but you can’t dance sweetheart. Good people are going while you stay in and you haven’t even been in the dance-off. It’s a joke.”

The BBC show contestant admitted he was curious to know how the social media user believed in a Strictly conspiracy theory.

“Ok… that’s you angry at the British public. I get that,” Dan commented.

“Can you explain how you think it’s a fix? Genuinely interested in the conspiracy theory.”

The person in question suggested that the public are unable to see the voting figures which added to claims of a show fix.

Nikki wrote: “Unlike other public voting shows, the BBC never produce their voting figures so it’s easy to fix. As I said before, you’re a nice guy buts it’s a dance competition, not a popularity contest. I’m not the only one that thinks this…but I seem to be the only one being questioned.”

Dan didn’t react to the last claim but viewers swiftly came to the BBC host’s defence.

Dorina said: “Suggest you stop watching if you hate the way the British public vote on this entertainment show. There is no need to be so unpleasant to any of the competitors and it makes you sound very petulant.”

RE Tree commented: “I don’t think it’s a fix. But I definitely suggest that more time is given for people to vote because 30 minutes isn’t long enough. I’ve voted for you, Dan.”

Gemma Raggett remarked: “People are voting because they love your dancing and they love how much you improve week after week. I had the pleasure of meeting you when Pompey played QPR in the FA cup a few years ago and you were genuinely one of the nicest people in football that I have ever met. Keep dancing.”

Strictly bosses have previously addressed the reasons why voting figures are not released to the public.

Firstly, they say that releasing the figures throughout the series may influence the vote in subsequent weeks.

The show bosses also argued that releasing the stats after the show is over may “distract” from the winner’s victory.

Explaining why the figures aren’t released mid-series, a spokesperson told The Mirror in 2016: “Releasing voting figures could affect the way that people vote, and also have an impact on the participants. We therefore do not disclose the exact voting figures.”

Strictly Come Dancing returns Saturday on BBC One at 6.40pm.