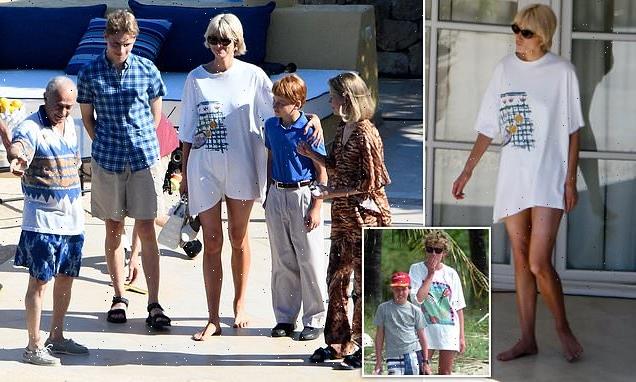 PICTURE EXCLUSIVE: The Crown’s Elizabeth Debicki wears an oversized white T-shirt as she films scenes as Princess Diana in Mallorca… after Netflix was criticised for covering the late royal’s final hours

Elizabeth Debicki got into character as Princess Diana as she filmed series six of The Crown at a villa in Mallorca on Monday, following criticism faced by Netflix for covering the hours before her tragic death in Paris in August 1997.

The actress, 32, had been styled by the wardrobe department into an oversized T-shirt which was one of the late philanthropist’s staple wardrobe pieces, while joined by actor Rufus Kampa, who plays Prince William.

Also on set was Salim Dau (Mohamed Al-Fayed), whose son Dodi was Diana’s love interest. Will Powell, who plays Prince Harry, could also be seen in a group shot. 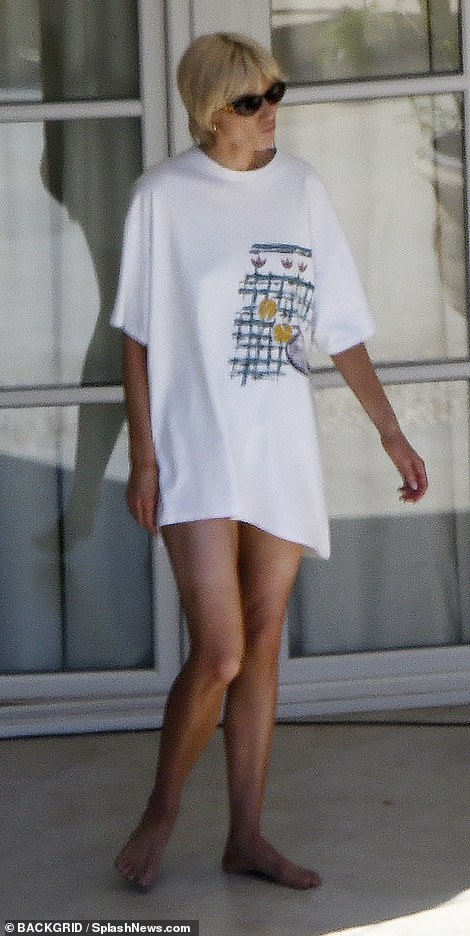 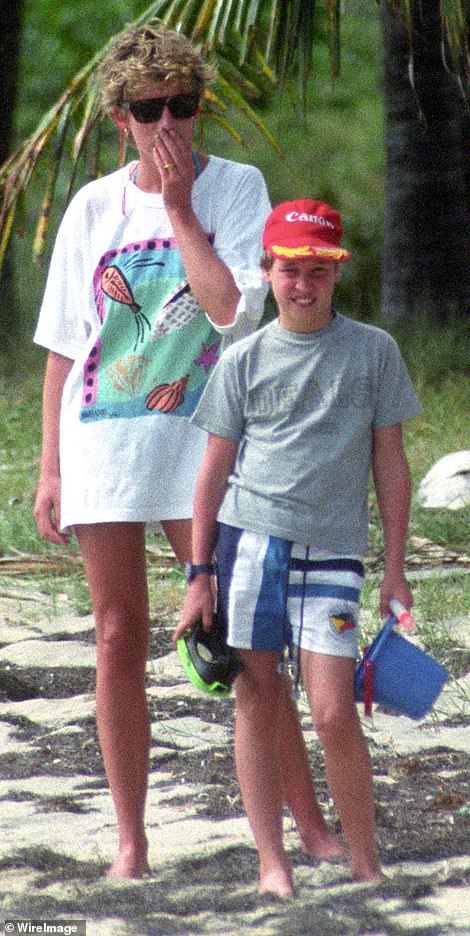 Uncanny: Elizabeth Debicki (left) got into character as Princess Diana (right, in 1993) as she filmed series six of The Crown at a villa in Mallorca on Monday, following criticism faced by Netflix for covering the hours before her tragic death in Paris in 1997

Members of the production crew were spotted filming the actors as they put their talent to use at a lavish villa with a colourful garden.

It comes after hit series is reportedly set to cover the hours before the Princess Diana’s tragic death in Paris in August 1997.

The show is already facing criticism over other storylines set to feature in the new series, including depicting the then Prince Charles as a disloyal schemer who plotted against his mother and Prince Philip ‘pursuing an affair’ with his close friend Penny Knatchbull.

William Shawcross, the Queen Mother’s official biographer, branded the series ‘odious’ and ‘deliberately hurtful’  over an apparently invented scene where Charles tells the Queen she should be ‘thrown… into jail’ for being a ‘bad mother’. 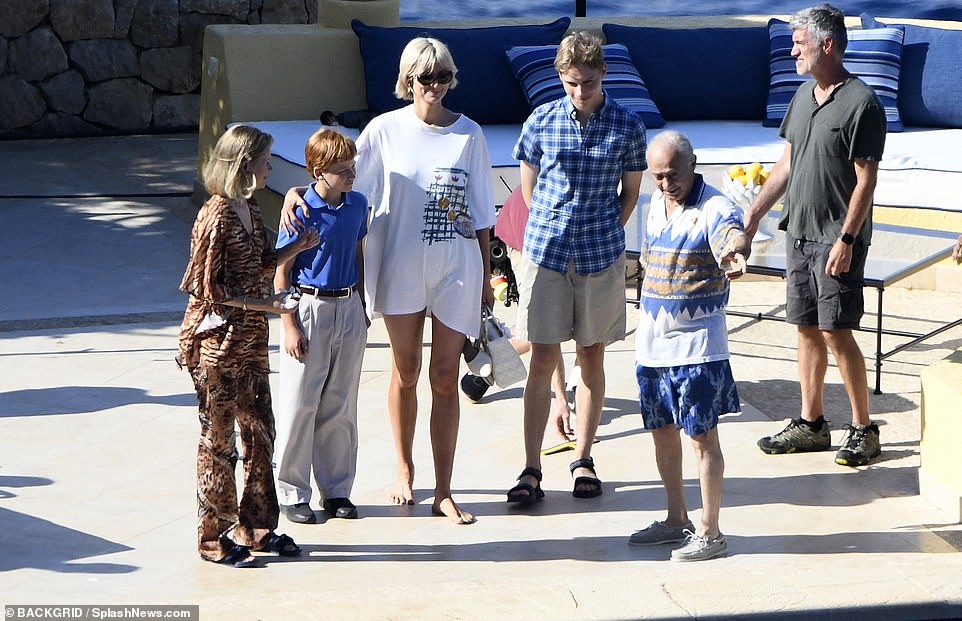 Outfit: The actress, 32, had been styled by the wardrobe department into an oversized T-shirt which was one of the late philanthropist’s staple wardrobe pieces 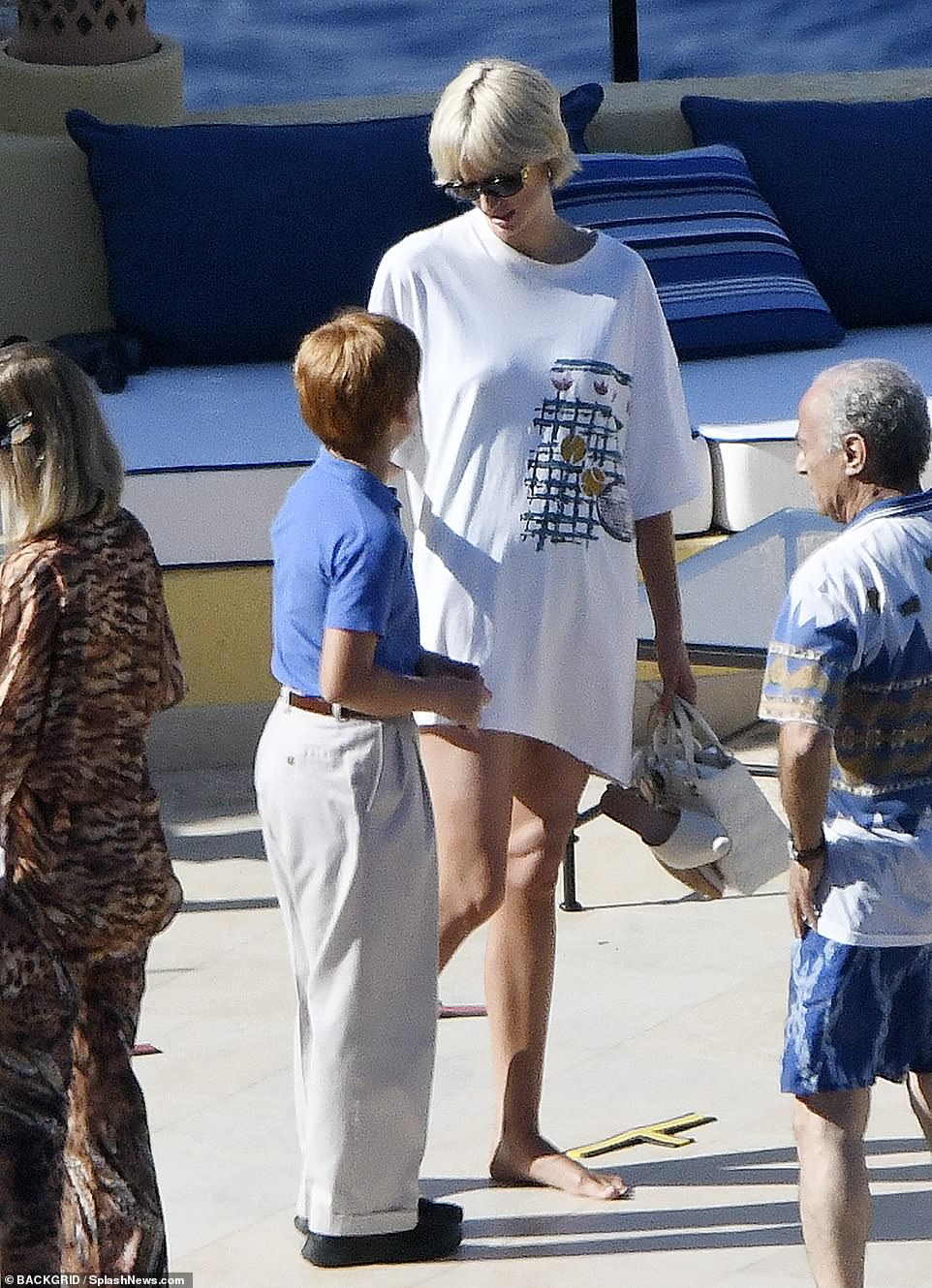 Doting mum: Elizabeth was seen in conversation with Will, whose red locks matched Harry’s 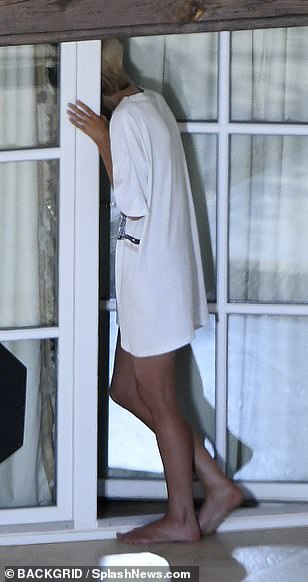 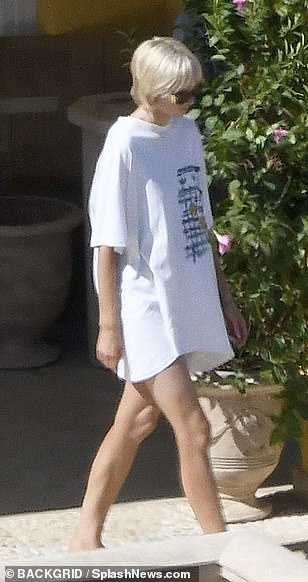 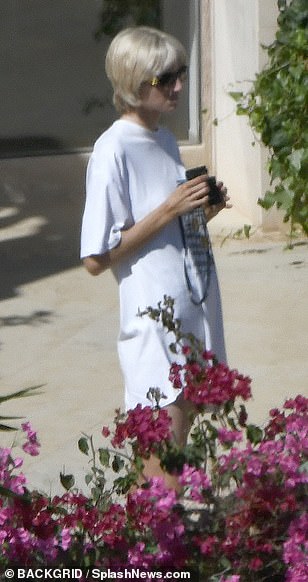 Strolling: Elizabeth went barefoot as she walked around the villa’s garden and wore her blonde locks in a short do

It comes after Netflix risked adding fuel to the fire by refusing to add a disclaimer to the series stating that the scenes, branded ‘malicious’ by one royal expert, are not fact but fiction.

Meanwhile, according to The Sun, even crew members are concerned in relation to the scenes depicting the lead-up to Diana’s death, with one reportedly saying: ‘It feels as though a line is being crossed.’

One source close to Prince William last night told the paper that they expect the Prince of Wales will be angered by Netflix’s move to ­reproduce his mother’s final days for entertainment purposes.

Netflix insists Diana’s death, in a car crash in the Pont de l’Alma tunnel in central Paris, will not be recreated in the new series. 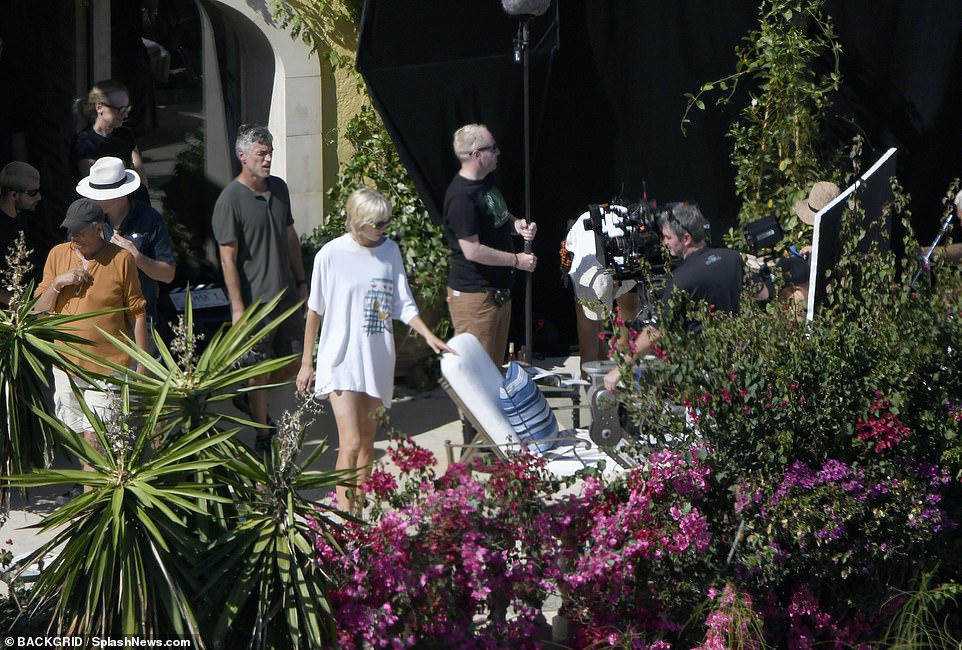 In action: Members of the production crew were spotted filming the actors as they put their talent to use at a lavish villa with a colourful garden 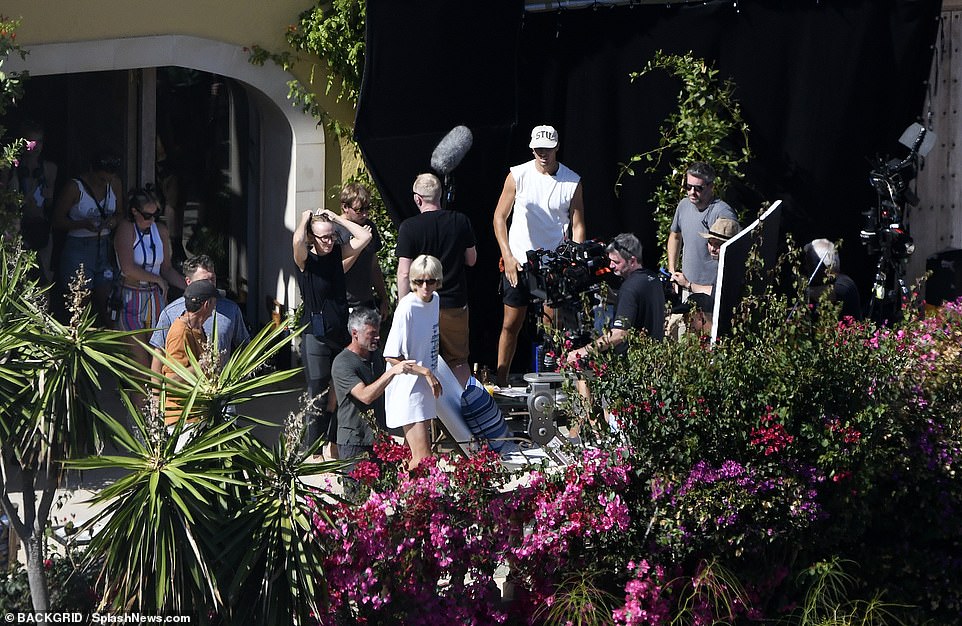 Stunning: Elizabeth looked beautiful as she got into character and was surrounded by crew members 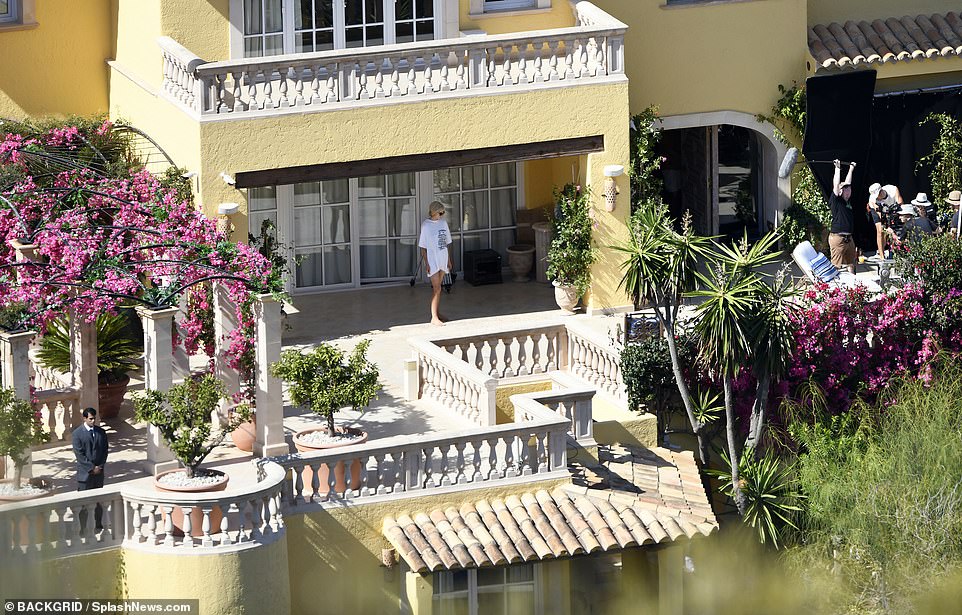 But one set source reportedly told The Sun: ‘To be going back to Paris and turning Diana’s final days and hours into a drama feels very uncomfortable.

‘The show always tried to present a fictional version of royal history with as much sensitivity as possible. But lately, as things get closer to the present day, it feels harder to strike that balance.’

The storyline where Charles plots to oust his mother was branded a ‘barrel-load of malicious nonsense’ by former prime minister Sir John Major as those close to the new monarch called for a boycott.

Critics argue the show should carry a warning that the ‘false, unfair and deeply wounding’ scenes are fiction, which not all viewers realise.

Yet The Crown has confirmed that series five will air from November 9 without a disclaimer.

Mr Shawcross, in a letter to The Daily Telegraph, said that the programme is ‘filled with lies and half-truths encased in lace and velvet’.

He also accused creator Peter Morgan of organising ‘a campaign to abuse’ the monarchy and ‘to destroy by lies a vital institution’.

Former culture secretary Nadine Dorries said that it was only fair that the show regularly displays such a warning, as is common with other programmes. 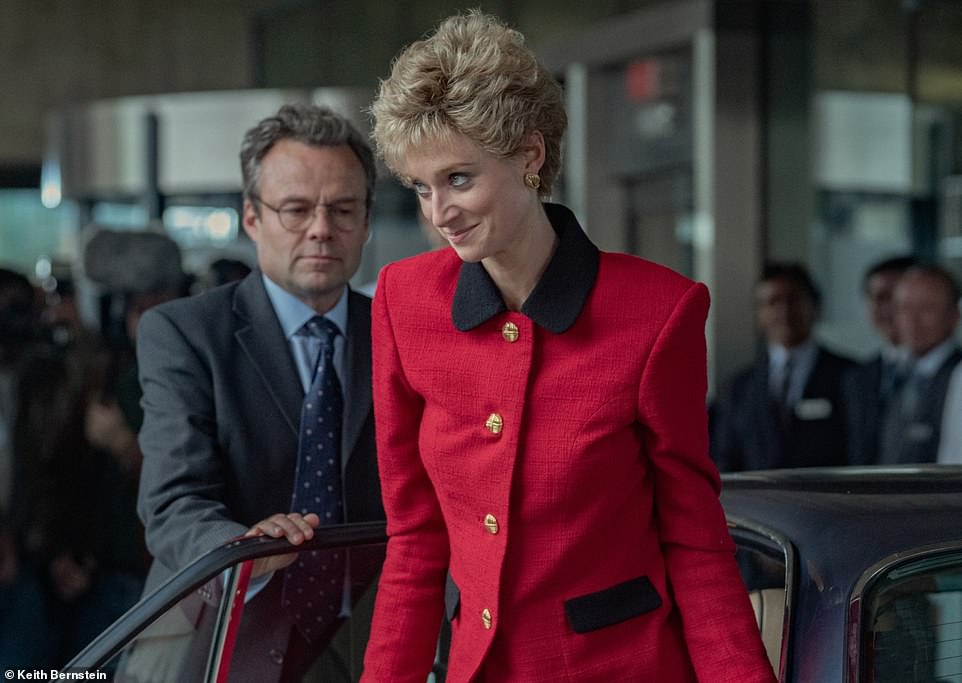 Criticism: Netflix is facing fury over plans to dramatise Princess Diana’s final moments before her tragic death in Paris in its new season of The Crown (Elizabeth as Princess Diana in The Crown, season five)

The Tory MP added: ‘If a programme is purely fiction as this series of The Crown obviously is, in the name of fairness and transparency it should clearly state so.

‘It’s quite bizarre that it would feature people who are alive today but are bound by protocol and unable to rebut false impressions and invented scenarios, knowing that many viewers would believe them to be real.’

Royal insiders have previously described the programme as ‘trolling on a Hollywood scale’, and last night no one was said to have been dissuaded from that view.

But Buckingham Palace has not formally commented on the row as it is believed officials want to rise above the fray with dignity.

A spokesman for the series said: ‘The Crown has always been presented as a drama based on historical events.

The Crown TRAILER: A shock new teaser shows Diana screeching to a halt in car chase scene and in skimpy swimsuit as she floats in a pool as the Royal Family is ‘plagued by scandal’ in the most controversial series yet

Series Five is a fictional dramatisation, imagining what could have happened behind closed doors during a significant decade for the Royal Family – one that has already been scrutinised and well-documented by journalists, biographers and historians.’

The new series, set in the 1990s, opens with Charles – then the Prince of Wales – lobbying then prime minister Sir John in a bizarre attempt to force the Queen’s abdication.

The prince, played by Dominic West, actively briefs against the Queen, whom he believes is out of touch.

But Sir John told The Mail on Sunday that the meeting did not happen and the ‘improper subject’ was never discussed. His office said that not one scene is ‘accurate in any way’, adding: ‘They are fiction, pure and simple.

‘They should be seen as nothing other than damaging and malicious fiction – a barrel-load of nonsense peddled for no other reason than to provide maximum – and entirely false – dramatic impact.’

In another scene, Charles says: ‘If we were an ordinary family and social services came to visit they would have thrown us into care and you [the Queen] into jail.’

While the new series was written at least a year before the Queen died and filming completed months ago, the timing of its release may lead to criticism.

Sources close to the Palace have said the Queen’s death just six weeks ago makes the scenes particularly hurtful. 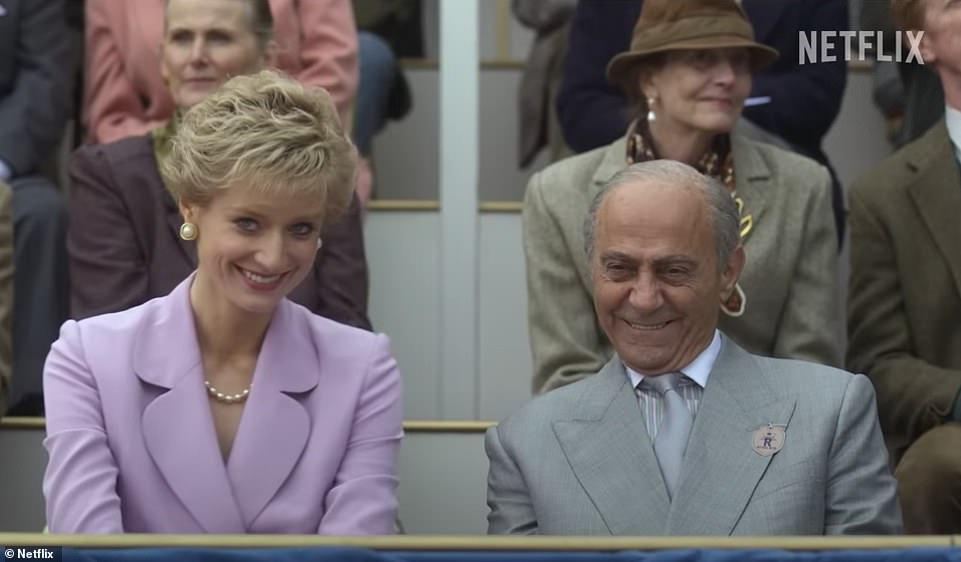