TikTok star Chase Hudson aka LilHuddy has spoken in an interview about his post on July 6 that caused the TikTokalypse scandal to erupt this summer. But what was it that he posted?

Chase Husdon and Charli D’Amelio dated for approximately three months earlier this year in a match made from TikTok celebrity heaven; however, it all came to a crashing halt in April when the pair split.

But the insane drama that was going on behind the scenes only came to light at the beginning of July in the most amazing TikTokalypse scandal after Chase turned on his so-called fellow TikTok chums in a crazy post.

Yesterday, Chase sat down with Charli’s older sister, Dixie D’Amelio, for an interview about his work, but a few minutes in, she asked him about the infamous July 6.

You know you exposed yourself that day?” said Dixie. “I did, but it’s better to come clean than to lie,” stated Chase before adding, “Oh, I came clean with everyone, just pull up the receipts, say what has to be said.”

He concluded by stating, “There’s nothing more to the story, nothing more that they can say that they haven’t heard already.” Dixie then continued with a different line of questioning. You can check out the whole interview at the bottom of his article.

The controversy all started when Chase was accused of cheating on Charli. After rumors emerged that he had kissed Nessa Barrett while still dating Charli, he decided to defend himself by denying any wrongdoing and also accusing a plethora of other TikTok stars of being cheats.

LilHuddy’s statement began by complaining that as all his “drama has been put on the internet for the world to judge,” him; therefore, he was going to retaliate. “Let’s lay out everyone else’s,” he teased.

“Anthony [Reeves] got with Cynthia [Parker] a week after we broke up on tour. Jaden [Hossler] actively tried to hook up with Dixie [D’Amelio, Charli’s sister] at our house on 4th July in front of me while she was dating Griffin [Johnson].” 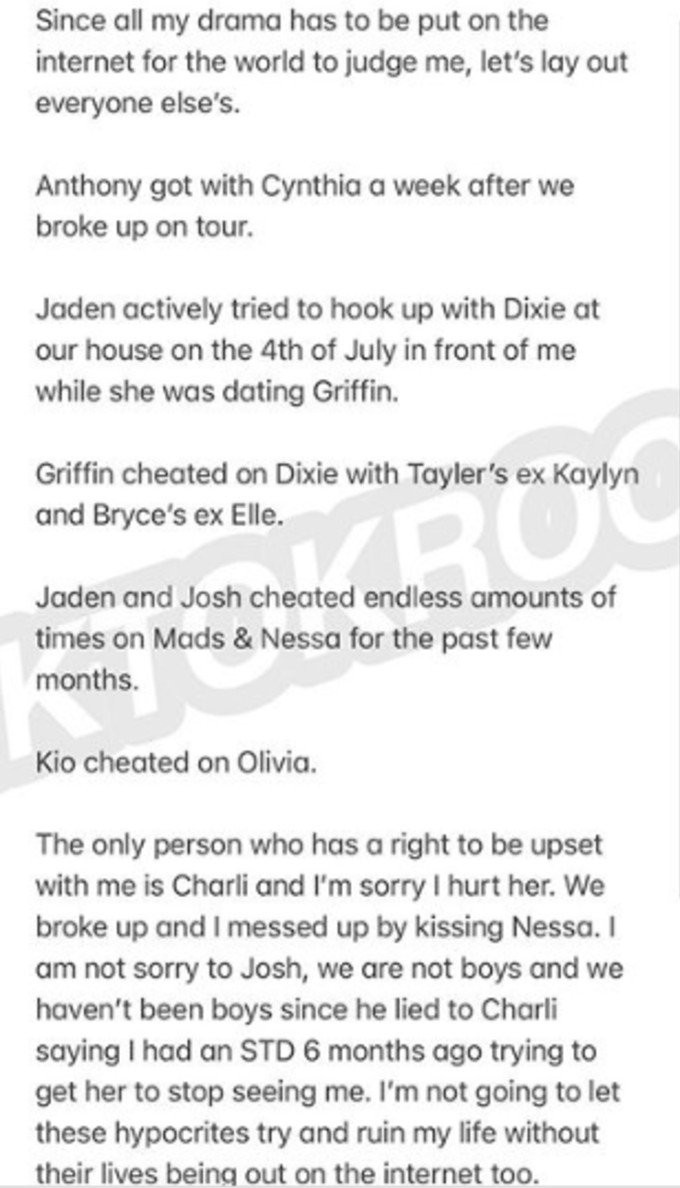 Chase also showed a little humility; he claimed that Charli had a right to be upset with him and that he was sorry he had hurt her. But he also claimed he’d kissed Nessa after they’d broken up; “We broke up and I messed up by kissing Nessa.”

At the time, Charli took no prisoners. She accused her ex of “deflecting” his actions and of playing the victim and not accepting the consequences of his actions.

The other TikTok stars mentioned, such as Anthony Reeves and Jaden Hossler, denied the allegations. Jaden tweeted that Chase needs to “stop lying,” and Chase’s other former ex, Cynthia Parker, joined Charli in accusing Chase of not owning his own mistakes.

It’s currently not known if all the TikTok stars have yet forgiven Chase.