On Aug. 27, Jessica Mulroney returned to Instagram after stepping away from posting on the social media platform for nearly two months after she was called out for showing white privilege during an exchange with influencer Sasha Exeter. Mulroney posted a photo of one of her twin sons smiling as he held Meghan Markle’s veil as The Duchess of Sussex walked down the aisle at the royal wedding in May 2018, but quickly deleted the post. She’s now speaking out about why she took down that pic — and others — and the reason Jessica Mulroney deleted her Instagram photo with Meghan Markle brings awareness to cyber bullying.

It didn’t take fans long to notice that the royal wedding photo, which was captioned, "I see this and pure joy," was taken off Mulroney’s page just hours after it was posted. Many believed that it had something to do with the rumors that Mulroney and Markle had a falling out amid the fashion stylist’s controversial white privilege scandal. (Mulroney issued an apology on June 11 ahead of her social media break, saying, "I plan to use this time to reflect, learn and listen.")

Mulroney previously shot down feud rumors when a follower asked about it in August. "Enough of this tabloid fake news," Mulroney wrote. "Just stop."

On Tuesday, Sept. 8, Mulroney once again addressed her followers who continued asking why she removed the royal wedding photo.

"People often ask why I delete certain posts," Mulroney wrote. "The amount of bullying and hatred I’ve had to put up with for 3 years…. I’m tired of looking at it." 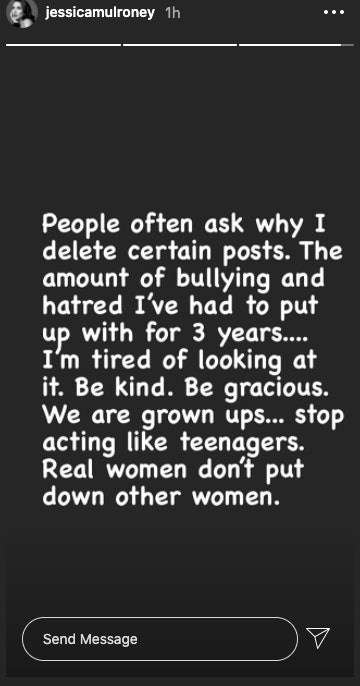 Mulroney went on to encourage her followers to "be kind" and stop bullying others.

"Be gracious," Mulroney concluded her post. "We are grown ups… stop acting like teenagers. Real women don’t put own other women."

While the world may not ever know exactly where Mulroney and Markle’s friendship stands, it’s known that neither women stand for bullying of any kind.