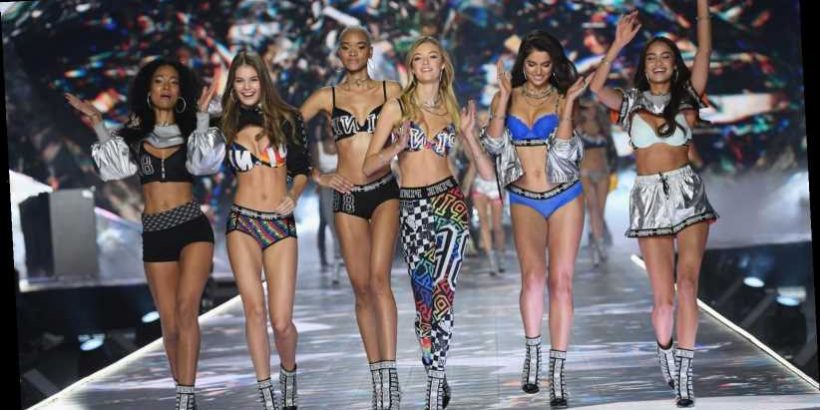 For more than four decades, the international lingerie brand Victoria’s Secret has recruited some of the most beautiful women in the world, including Tyra Banks, Naomi Campbell, Gisele Bundchen, and Adriana Lima, to model their clothing. However, over the years, the brand has continuously been under fire for its lack of diversity and general unwillingness to change its ways. This lack of inclusivity and diversity has been especially showcased during the brand’s annual Victoria’s Secret Fashion Show (per Health Magazine).

In 2019, the lingerie brand sought to repair its image with the hire of size 14 plus-size model Ali Tate-Cutler. In the past, Victoria’s Secret did not hire models above a size 12. In the future, Tate-Cutler hopes that Victoria’s Secret will work even harder to curate more inclusive brand messaging. “Size 14 is actually the average size of women in America and I do think that we need to see more of it in media and fashion because most women are that size,” Tate-Cutler told E! News. “So, we need to be accurately represented in brands and media. For Victoria’s Secret I am so excited that they decided to put a size 14 woman like me on the wall. I feel like they are headed in the right direction and they are listening to their audience who have requested to see more women of diverse shapes and sizes.”

Though she has quite a big job on her hands, Tate-Cutler’s resume suggests that she is ready to take on the world.

While it might have taken the lingerie brand decades to showcase different body types, Victoria’s Secret finally welcomed its first plus-size model in 2019. Ali Tate-Cutler became the brand’s first plus-size model when she appeared in an ad for a collaboration between the United Kingdom-based lingerie company Bluebella and Victoria’s Secret. “When I went in today to the Victoria’s Secret store for the launch of the collaboration it felt surreal,” Cutler told E! News. “I never expected that I was going to see an image of myself on the wall next to these top supermodels that I have been looking up to since I was a little girl.”

Hiring Tate-Cutler might have been a way to repair Victoria’s Secret’s less-than-stellar image. Prior to hiring the plus-size model, outsiders criticized the brand for its lack of inclusivity and body positivity. The brand’s annual fashion show was canceled back in 2020 after numerous celebrities complained about the lack of representation on the runway (via E! News). During an episode of Watch What Happens Live With Andy Cohen, supermodel Kate Upton voiced her concerns about the brand’s messaging. “We’re sick of seeing the same body type,” Upton said, according to The Hollywood Reporter. “You have to be body inclusive now, every woman needs to be represented otherwise it’s a snoozefest.”

Apart from working as a model for Victoria’s Secret, Ali Tate-Cutler also hopes to help others embrace a more fulfilling life. The model hosts “The Love You Give” podcast, in which she discusses topics related to self-help, business, body positivity, and wellness with experts in each field. “I decided to start my podcast when I was on a sacred plants retreat in upstate New York and our teacher asked us to meditate with a plant,” Tate-Cutler told Faithfull The Brand. “I meditated with a flower. Suddenly, the idea of a podcast popped into my head. I have always been interested in wellness and spirituality and my family has raised me to be pretty open that way – so I thought the podcast was the perfect way to talk about these things and hopefully help others with their mental health as wellness has helped me.”

Tate-Cutler’s struggles with depression and anxiety, and corresponding treatment with spirituality, meditation, talk therapy, and other wellness-related ventures ultimately gave her the desire to help others discover a similar path to healing (via ATEM). In the future, the model hopes to interview heavy hitters in the wellness industry, like Oprah Winfrey and author Marianne Williamson (via E! News).

While being a model has its perks (worldwide admiration doesn’t sound too shabby), Ali Tate-Cutler has admitted that, especially as a plus-size model surrounded by traditionally thin models, her mental health has suffered over the years. “I agree that the fashion industry lends itself to mental health issues,” she told New York City-based health and beauty shop ATEM. “I definitely started encountering my own issues when I became a model. The fluid nature that comes with our industry focusing on ‘the next big thing’ or what is considered attractive gets to a model’s head.”

Even from a young age, the struggle to accept her curvy body impacted her mental health. In fact, in her earliest years as a professional model, Tate-Cutler attempted to fit in with the status quo by restricting her diet. She detailed these struggles in a post on her Instagram, in which she called this particular affliction “disordered eating.” As she stated in her interview with ATEM, Tate-Cutler has worked to overcome these issues by realizing that happiness does not come from “what we buy, what we wear, or how we look.”

If you are struggling with an eating disorder, or know someone who is, help is available. Visit the National Eating Disorders Association (NEDA) website or contact NEDA’s Live Helpline at 1-800-931-2237. You can also receive 24/7 Crisis Support via text (send NEDA to 741-741).

Before Ali Tate-Cutler adhered to a wellness-focused lifestyle that includes an all-vegan diet and consistent juice cleanses, she was a meat-eating professional soccer player living in London. During that time in her life, Tate-Cutler’s father, Mitchell Cutler, was diagnosed with advanced prostate cancer and diabetes. Though his diagnosis was grim, he decided to go on a three-month-long juice diet that he credits with bringing him back from the brink. From that point on, Tate-Cutler’s entire family decided to embark upon a wellness journey. In fact, her parents, who owned the popular restaurant La Fondue in Saratoga, California, sold their restaurant to join the Tree of Life spiritual community in Arizona to focus even more on their own wellness journey (via Rachel on the Run).

Tate-Cutler’s own health regimen includes reading copious amounts of medical journals and maintaining a schedule that includes an eight-day juice fast at least once a year. In an interview with the Rachel on the Run blog, the model also revealed that she consumes lemon water on an empty stomach every morning after waking up and then follows that with celery juice made from stalks soaked in apple cider. In short: She takes her wellness routine very seriously.

Despite being a plus-size model, she has had some choice words for curvy people in the past

Back in 2018, the sustainable fashion brand Reformation announced that it would be launching a new plus-size-inclusive collection with Ali Tate-Cutler called “The Reformation x Ali Tate Cutler Collection.” While the brand was busy promoting its inclusive campaign, others were equally as busy pointing out fairly damaging remarks that Tate-Cutler had made about overweight people in her past. Shortly after the collaboration was announced, several people took to Twitter to remind the masses of Tate-Cutler’s remarks about “fat” people (per Teen Vogue).

In 2016, fashion and beauty writer Alysse Dalessandro posted an article from Everyday Feminism called “11 Reasons Your ‘Concern’ for Fat People’s Health Isn’t Helping Anyone” to Facebook. Ali Tate-Cutler made some incredibly controversial comments on the post, and though they did not get much press at the time, her collaboration with Reformation brought them to light. “Sorry but I don’t care about people’s health who are fat, that’s their own prerogative and their own life to lead,” she said in the comments, according to Dances With Fat. “I do care about the excessive amounts of carbon, nitrous oxide, and methane gases it takes to produce a large person; the amount of animals that have been killed; the amount of exploitation that is going on to create fat. Being obese is simply bad for the environment.” Though she published an apology after the fact, many people thought that her apology was insincere, including Dalessandro.