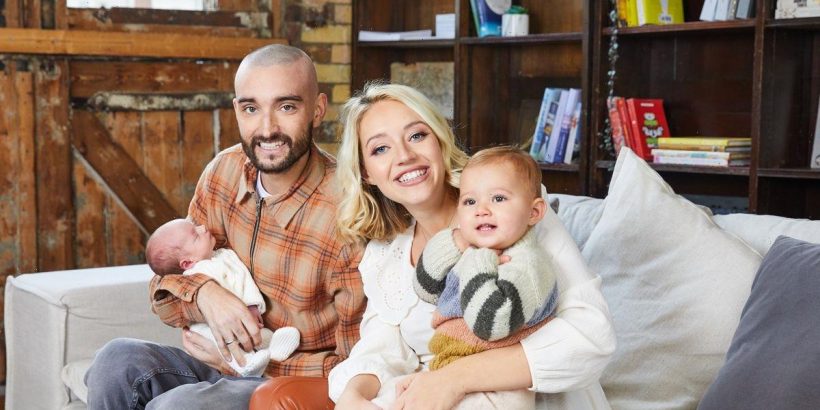 Sitting in the doctor’s small office, at the height of summer last year, I felt like it was too stuffy to breathe all of a sudden. We were there to get Tom’s MRI scan results and I sat numbly trying to take in the doctor’s words.

“Tom has glioblastoma,” he gently explained, which we learned was the most aggressive form of cancer – starting in the brain. As I struggled to comprehend what this meant for us, I could feel sweat beads forming on my forehead. But I didn’t cry. I didn’t scream. I didn’t leap up and shout, “Why us?”

I just accepted the news, digested it and made plans to move forward.

We were told his treatment was starting in three days, so I turned to my husband and said, “Let’s go home and figure it out.”

The car journey back was silent aside from my friend, who had driven us, trying to make small talk.

We then had to relay all the information to each of our family members. We definitely went into complete survival mode and just did what we needed to do on that day. We really are a strong bunch and they all reacted in a similar way to me.

Even before learning about the extent of his condition, we were sort of expecting it to be something very serious because of a seizure he had while we were on holiday in Norfolk. He’d also had a weird experience while watching a football match, where he couldn’t see the ball.

Tom had seen a doctor in Norfolk on his own, who said he suspected some sort of brain tumour. It was horrific that Tom had to get that news without any support. He just cried his eyes out in a room alone. When he told me that later, it broke my heart.

Before finding out how serious it was, I told him, “Whatever it is, we’ll deal with it together.” That has been my attitude the whole time. There’s no point worrying about something you have no control over.

The doctor told us right at the start to not Google any statistics around the disease and I made a promise to myself that I wouldn’t. We’ve also made the decision not to find out his prognosis. That isn’t helpful to anybody and won’t get us anywhere. My opinion is that things can change at any point.

Tom is young, fit and healthy, and every patient takes to the treatment differently. I could get run over by a bus tomorrow and I don’t spend time looking up the statistics of that happening. However, Tom is the King of Google, as he wants to arm himself with knowledge. That’s his way of coping and I leave him to the research. I prefer not to know and take each day as it comes.

When he was diagnosed I was pregnant with Bodhi. I was instantly practical rather than being a worrier. I was looking after our toddler Aurelia and running my businesses [Kelsey is co-founder of performing arts academy K2K Stars].

Even now, I still wake up and stick a smile on my face, no matter what. That’s just who I am. Mind you, our two dogs are staying elsewhere at the moment – even I have limits!

Of course, I have my down days. I know it’s of no use, though, for my children or Tom to see me being upset.

In those early days of his diagnosis, I’d go to the bathroom on my own and cry. It wasn’t necessarily because I was sad but more out of pure frustration for the situation.

Our lowest ebb came when our dog Buddy was run over. It was day three of Tom’s radiotherapy and it just felt like, “What more could possibly happen to us?”

But I’m such a believer of everything happening for a reason, because when we took Buddy to the vets they discovered he had previously eaten a kebab stick and were able to retrieve it. They were shocked that he had survived so long. He’s a miracle dog – and I also have a miracle husband.

These days, we have a routine. We’re leading healthy lifestyles and enjoying our family. Even with Tom’s chemotherapy, now that he’s in the third cycle we know what we’re doing. We are aware that on days five to seven of each week in the 28-day cycle it hits him hardest, and we’re equipped to deal with that. He’ll have zero appetite and feels sick constantly. He can’t do much on those days, and I know that ahead of time.

My mum has stayed with us and all of our families pitch in if we need them. It gets Tom motivated to know what’s coming, and he’s become an expert at picking himself up.

Now, I don’t ever get upset. I don’t think I’ve cried once this year. I don’t feel pressured to be positive and hold the family together. It’s just natural because I love Tom. I married him in sickness and in health. Any wife would do the same. I know too that if it was the other way around, Tom would be there for me in an identical way.

It was a big decision to go public with his illness last October but I knew it was the best thing we could possibly do. I didn’t want Tom to feel like he was living a secret. We wanted to be able to go out and about in our local area without people asking questions about his appearance. It’s been great because so many people have reached out to us with different pieces of information. A problem shared really is a problem halved.

When Bodhi arrived [in October 2020] – two weeks early, just to add to the chaos of our lives – he became something really positive to focus on. It reminded us that every day is a new day, and we may be on a roller-coaster but we have so much to be grateful for.

Both our children are so young and so they aren’t really aware of what’s going on. It’s lovely that they just continue as normal, in their own little worlds. To them, we are the same mum and dad we’ve always been, and we intend to keep their lives the same. We will be honest with them about Tom’s illness when they are old enough to understand.

My mum never shied away from anything with me and I want to parent in the same way. I want them to know that life isn’t always rosy, but we get through it. I know we will say, “Dad has a brain tumour but he is fighting it.”

We are looking to the future now. We are planning for more children – I’ve always wanted a big family and I think we’ll end up with four. But there’s only a 16-month age gap between our two children and it’s definitely been a lot, even without taking into account our circumstances, so I won’t be having children that close in age again – doing that once was enough.

Tom was recently told he’d had a “significant reduction” in the size of the tumour. I couldn’t believe it, I was asking him if those were the exact words the doctor had said. We just stood in our bedroom crying tears of joy and relief. We are looking to our future with nothing but positivity. Tom will always be my Tom and we’ll get through it together, like we always do.