Spoiler warning for Episode 1 of The White Lotus Season 2.

It is finally time to once again check into The White Lotus for more lavish scenery, class commentary… and graphic nudity.

For the second season of his resort satire, creator Mike White transposed the setting from Maui to a sister hotel in Sicily, welcoming a brand new cast of wealthy, complicated guests (and returning scene-stealer Jennifer Coolidge as Tanya, because why wouldn’t you). And just as the pilot included a gratuitous shot of Steve Zahn’s penis, the Season 2 premiere “Ciao” also served up some full-frontal male nudity, continuing prestige television’s ongoing efforts to balance the gendered scales when it comes to nude scenes.

In “Ciao,” Theo James’ character Cameron Babcock follows Harper Spiller (Aubrey Plaza) up to her hotel room in order to borrow a bathing suit from her husband—and proceeds to strip down in her presence before donning the swimmers, in clear view of the mirror where she is getting sunscreen.

James foreshadowed this scene in a recent interview with Entertainment Tonight, in which he joked: “It is in my contract that I’m not allowed to do anything without being completely naked.” He went on to say that filming the nude scene “felt natural,” adding: “It’s funny because we’re all kind of naked. It’s a holiday show, really.” 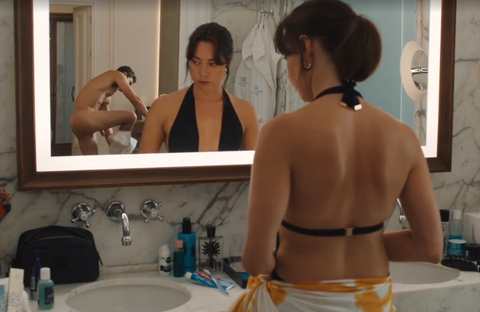 It is left unclear in that scene whether Cameron intended for Harper to get the eyeful that she did: was it an embarrassing misunderstanding, or perhaps some kind of sexual power move that hints at a future harassment storyline for this pairing? You’ll have to keep watching to find out, although James can assure viewers that the scene is definitely there for a narrative reason.

“We don’t know whether it’s deliberate or it’s accidental,” he says. “But it reveals itself.”