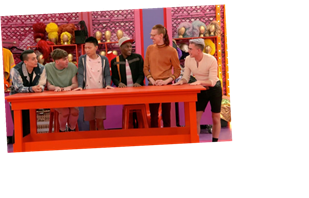 Say goodbye to the Pork Chop Loading Dock, because the new episode of RuPaul’s Drag Race is finally bringing all the queens who were cut in the season premiere back into the Werk Room. Naturally, they wasted no time stirring up some drama — one of the queens may have even wound up already getting on RuPaul’s bad side. Check out this first clip of RuPaul’s Drag Race Season 13, Episode 3 to get a sneak peek at the Pork Chop queens’ time to shine:

It’s safe to say Season 13 of Drag Race had one of the most unexpected, twist-filled premieres ever, as half the cast was seemingly eliminated right off the bat. In Episode 2, the queens who won their premiere lip syncs — the now-dubbed Winner’s Circle — got to show off their looks in a runway show and perform their own verse in RuPaul’s song "Condragulations." Nobody wound up going home, but that very well may change in Episode 3, which is focused on the Pork Chop queens.

The first nine minutes of Episode 3 show the second group of queens finally entering the Werk Room, as Denali, Joey Jay, Tamisha Iman, Rosé, Kahmora Hall, and Utica Queen prepare for their Ru-demption. It sounds like this episode will mirror Episode 2, as RuPaul teases the queens will write lyrics and perform to his song "Phenomenon" after showing off two looks in a runway show. But the clip ends with a very unfortunate moment for one of the queens, who appears to hold up the runway portion of the episode.

Yikes… things certainly don’t look good for Kahmora Hall. Her Chicago sister, Denali, let it slip that Kahmora is infamous for taking hours to do her makeup, and it looks like that time-consuming process may be her undoing. As Ru, Michelle, and Ross wait for the runway to start, a producer is heard demanding that Kahmora get to the stage or the show would go on without her. "It’s sinking in — I blew it," Kahmora admits in her confessional.