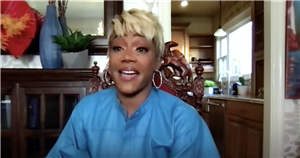 On Monday night, Tiffany Haddish made a virtual appearance on The Tonight Show Starring Jimmy Fallon, where she briefly addressed her recent arrest on suspicion of DUI. “I’ve been praying to God to send me a new man. A good man. And God went ahead and sent me four . . . in uniform,” Haddish joked in reference to her breakup with Common in November 2021 and the Jan. 14 arrest in Georgia. The comedian added on a serious note, “And now I got a really great lawyer, and we’re going to work it out. I’ve got to get my asking of things to God a little better.”

Haddish’s arrest was on the heels of four losses she suffered: her grandmother, her dog, and her friends Bob Saget and Carl Craig. Touching on two of those losses, the Afterparty comedian told Fallon, “[Saget] was like a big mentor to me, a big brother, a father figure. He meant a lot to me . . . He was the first white man to ever tell me, ‘Just be yourself, just be who you are, Tiffany. Don’t worry about nothing. Just be you.’ That was huge for me.”

When it comes to her grandmother, who raised the comedian, Haddish referred to her as the person who “saved my life.” She added, “That’s my heart. She was like my soulmate.” Fallon then suggested that the Girls Trip star channel her recent struggles into a new project. “I’m definitely making something out of it. My next special is going to be about grief. And it’s going to be hilarious,” she said. Watch the full interview above.