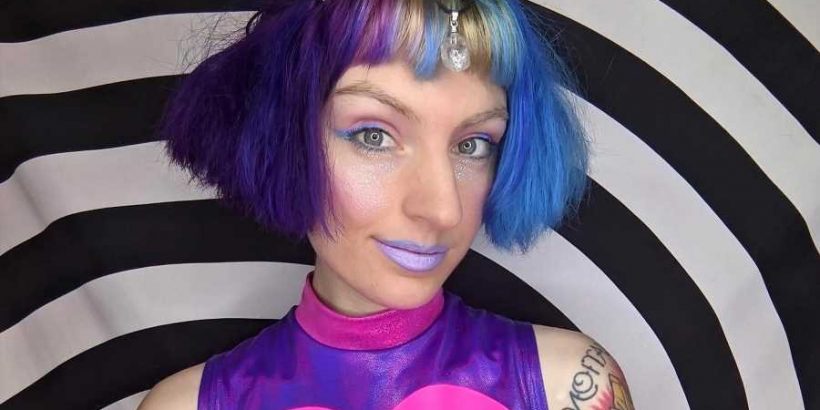 “Today’s sermon is going to be on Unitopian Anarchy and Autonomy,” Unicole Unicron says in the opening of a sermon on YouTube. Clad in an ethereal white veil, against a background of dizzying black-and-white swirls, the leader of the self-described cult Unicult proceeds to spends the next 51 minutes detailing thoughts on the Covid-19 vaccine and why the cult’s leader is not encouraging followers to get the vaccine. “Only you have autonomy over your own body,” says Unicron, who uses xe/xim pronouns. “Do what is right for you. Perform no medical rituals that are against your own strong intuitive knowledge of your personal health.” Unicron then explains why xe believes contracting the virus would not get xim sick, saying, “I have ascended to the point where I am confident that my own experience of my own internal state and my own vibration of harmony is enough to protect me.”

Biden and Big Companies Are Done Coddling the Anti-Vaxxers

The Private Lives of Liza Minnelli (The Rainbow Ends Here)

5 Festivals That Ended in Disaster

In the sermon, Unicron also promoted the erroneous belief that the Covid-19 vaccine does not reduce the risk of getting or transmitting Covid. “I have done every single thing I can do within my own personal reality to protect myself from my point of view and there are people doing the same with the vaccines, and yet they’re still getting Covid,” xe said in the sermon. “So can we blame them for endangering society?”

Unicole Unicron is the leader of Unicult, an online cult that describes itself as “a collaborative effort for anyone who wants to work towards the goal of creating a bright and hopeful future.” Unicron, who lives in Los Angeles-based and works full-time as a UX writer, decided to start the cult after surviving a suicide attempt, as a way to find purpose and “stay alive.” Xe claims to be a magical being who is in contact with extraterrestrial beings who use xir as a vessel to promote their ideas. Basic admission to the cult, which mostly involves access to its Discord server, costs $11, while becoming a devoted member or a magician (essentially, a Unicult clergy member) costs $22 and $33, respectively.

Over the past few years, Unicult has received bemused, vaguely positive press coverage, including a 2018 viral story when Unicron announced plans to open the world’s first sex robot brothel (the project was scrapped because of a lack of funding), and a 2019 Vice video profile titled “Finding Salvation with an Online Cult“; xe has also attracted attention for “brainwashing” videos on YouTube and for attempting to sell a “spiritual sex tape” for $444. Unicult has largely escaped much serious scrutiny, in part due to its candy-colored, hyperpop aesthetic and its tongue-in-cheek messaging; in a 2016 piece, for instance, Vice writer Leigh Alexander praised the cult, saying of Unicron, “the idea of a divine digital pop star witch from space is… charmingly reminiscent of a long-gone tech utopian dream.” Many have interpreted the fact that Unicult is open about being a cult as a performance art piece or a commentary on religion and mindless consumer culture, rather than taking its self-designation at face value.

Throughout the Covid-19 pandemic, however, Unicron has been openly promoting anti-vaccine views on xir social platforms, including xir TikTok account, where xe has almost 100,000 followers; and YouTube, where the channel has gotten more than one million views and where xe does weekly live streams, called “Cam Church.” Most recently, Unicron posted a video on TikTok offering to provide religious exemption letters to Unicult members who do not wish to be vaccinated.

Unicron has been espousing conspiracy theories about Covid-19 and vaccines since at least May 2020, when xe wrote a post for Unicult’s blog Pop Cult about the pandemic. “The disease is dangerous, perhaps a bioweapon, but likely not nearly as dangerous as it is made out to be,” xe said of Covid-19 before discussing the possibility of a future vaccine: “Many cures for disease and viral infections exist. It’s about the immune strength, not about any particular drug. Our medical industrial complex has worked hard to conceptually remove the cure from the actual aspect of true healing so that they can make a profit by selling pills and vaccines.”

In an April 2021 video titled “Why I am NOT getting the vaccine,” Unicron referred to the Covid-19 vaccine as “experimental,” saying, “my choice to not get it is based on the fact that I am a radical and I don’t just do what other people say.” Later xe refers to the vaccine as a “brainwashing agenda to get everybody on the same page.” In a June 11th video on conspiracies in general, xe referred to vaccines specifically, saying, “Vaccines work. But at the same time they’re full of toxic metals and who knows what else?”

In an August 25th video on TikTok, where Unicult has its largest following, Unicron vowed to “protect” members who do not wish to get the vaccine. “If you are intuitively against the vaccine and you feel with every fiber of your being that it is wrong for you personally to get, we respect that decision and we honor it,” xe says in the clip. “We also protect your right to get the vaccine if you intuitively feel that it is for your best interest.” Unicron adds that Unicult is a real religion and that the church can provide documentation of religious exemptions for any Unicult members who don’t want to be vaccinated. (Unicron told Rolling Stone xe applied for 501c(3) nonprofit status for Unicult in March, which was confirmed by California state attorney general records, but the application has not yet been approved.)

“If the slimiest grossest monster comes out of the sewer and says kiss me, you’d be revolted,” Unicron says of the vaccine.

In a conversation with Rolling Stone, Unicron denied being anti-vaccine or discouraging followers from being vaccinated, saying Unicult respects individual choice and freedom above all else. Xe reasserted, however, that xe personally did not wish to receive the shot, citing previous “medical trauma.” Xe says of the vaccine, “If the slimiest grossest monster comes out of the sewer and says kiss me, you’d be revolted. That’s how it feels in my body. I do not feel like it’s right for me.” Unicron says that xe takes “many other measures to make sure I’m healthy,” such as eating vegan, exercising, and taking oil of oregano and colloidal silver. (There is, of course, no evidence that either are effective against Covid, and the FDA has said of colloidal silver supplements in particular that they “are not generally recognized as safe and effective and are misbranded.”)

When asked about the August 25th TikTok video, Unicron said that so far, xe had supplied only one religious exemption letter to a follower who had requested it. However, Unicron personally submitted a religious exemption letter to xir employer last month, after they announced they would requiring all employees, including those working remotely, to be vaccinated. “I wrote that Unicult says our intuition is holy and if we are intuitively against a medical procedure we should not subject ourselves to it,” xe says. (Xe says xe has not heard back from xir employer whether the exemption has been approved.)

Unicron has started publicly espousing anti-vaccine views around the same time that Unicult itself has seen an increase in membership — up to 200 percent, according to Unicron, who estimated that the group now has about 6,000 official members. Part of this is due to Unicron’s success on TikTok, where xe started racking up followers around 2020, shortly after a TikTok video of Unicron explaining the principles of “starseeds,” or “alien consciousnesses born into human bodies,” went viral. That video received widespread mockery, landing on the front page of Reddit’s r/cringe forum, but it also helped provide exposure for Unicron and Unicult at a time when people on social media were increasingly open to New Age ideology and conspiracy theories.

Far from being a detriment, packaging Unicult explicitly as a cult is “kind of a smart move” in terms of attracting attention and new followers, says Diane Benscoter, a former Moonie and an expert on cults. “That kind of making fun of yourself is not uncommon in cults because underneath it, they take themselves very seriously. Putting it out there to the world, it kinda takes that ‘OMG, you’re a cult’ reaction away.”

“This is not just cringey,” said one person on Twitter. “It’s absolutely dangerous.”

Some on social media have accused Unicult of preying on vulnerable young people online. “[Xe] is literally using TikTok to recruit kids struggling with identity and mental health to join [xir] ‘Unicult’,” one person tweeted after the starseed TikTok video went viral. “This is not just cringey, it’s absolutely dangerous.” In the past, Unicron has also downplayed the efficacy of medication to treat mental illness, using xir own struggles with borderline personality disorder as an example of overcoming illness without pharmaceutical intervention. “There seems to be almost an effort to recruit people with mental health issues,” says Benscoter. “[Unicron seems to be saying]: ‘This is a safe place for you if you’ve been struggling with depression and anxiety. If you’re like me, there’s a way out of that misery, and it doesn’t have to be what the doctors are saying.’” Unicron also posted a video a few years ago titled “Quit Your Antidepressants,” which xe has since removed. Unicron, who says a “high percentage” of Unicult’s member base is non-neurotypical, acknowledges that xe is personally opposed to taking medication to treat mental illness but does not discourage xir followers from doing so: “I do try to make it a point to emphasize that people should make their own decision about what’s healthiest for them,” xe tells Rolling Stone.

Unicron has been vocal about plans to expand the cult’s reach. Recently, xe attended a retreat for spiritual TikTok creators called Ascended in Sedona, Arizona, which was also attended by creators who have promoted anti-vaccine and QAnon-adjacent ideology. Xe has also announced plans to take Unicult from digital to IRL spaces by starting a commune called UniAcres, to be located on a 10-acre property in Georgia; complete with six bedrooms with bunk beds, six bathrooms, and a church on site. Xe says that so far, Unicult has raised $10,000 ($5,000 of which is from xir own money) to build the commune. Unicult is also planning to release a children’s book as part of UniKids, a child outreach program that xe envisions as being “similar to Montessori or Waldorf,” which Unicron says was part of the plan for Unicult to be recognized by the IRS as a legitimate religion.

“We’re the religion of the future,” Unicron tells Rolling Stone. “Because I’m from the future. And everything I stand for and represent is from a future time. I know that’s true because I’ve watched it unfold.”