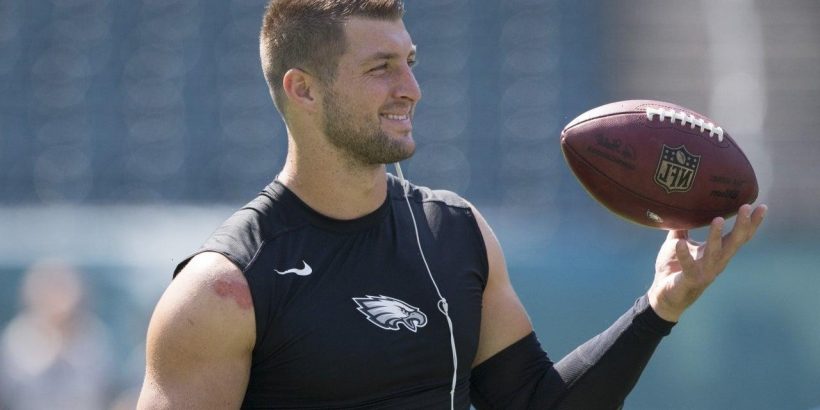 Tim Tebow is coming back to the NFL. After a six-year hiatus, the Jaguars concocted a plan to sign the former NFL quarterback to a one-year deal, and it’s now in the books. The former quarterback has officially inked his new contract with the Jacksonville Jaguars, the team announced on Thursday, and is all set to make his transition to the tight end position.

He’ll wear No. 85, per Ian Rapoport of NFL Network, at least at for now.

There has been a lot of backlash surrounding the move, including from a former teammate of Tebow’s, but it isn’t deterring head coach Urban Meyer from rolling the dice on the once-retired NFL player who helped Meyer conquer the collegiate football landscape in their time together with the Florida Gators.Tebow, 33, recently worked out for the Jaguars and Urban Meyer, but Meyer wouldn’t go into detail about the potential move ahead of or during the 2021 NFL Draft, instead noting the team would address it after the event had concluded.

During a recent podcast appearance, Meyer clarified that he was not present at Tebow’s workouts and that the Jaguars have yet to officially sign him. He did say that he is “getting close” and he’s “got to make a decision here pretty soon” regarding whether or not the Jaguars will actually bring Tebow in. A former Heisman Trophy winner, Tebow went 9-7 as the Broncos’ starting quarterback before spending one season with the New York Jets. He then had two uneventful stops with the Jets and Patriots before spending nearly five years in the Mets’ minor league system.

A two-time national champion with the Gators, Tebow completed just 47.3% of his passes in two seasons with the Broncos. In 11 regular-season starts during the 2011 season, Tebow threw twice as many touchdowns (12) as interceptions (6) despite completing just 46.5% of his throws. But after helping the Broncos capture the AFC West division title, Tebow threw the game-winning touchdown pass in Denver’s upset victory over Pittsburgh in the wild-card round. Tebow’s next game — a blowout loss to the Patriots in the divisional round — would be the final start under center for an NFL team.

Meyer recently confirmed that Tebow had worked out with the Jaguars as a tight end. The Jaguars’ current depth at tight end includes Chris Manhertz, rookie Luke Farrell, and Tyler Davis.

“I have one job and that is to win games with the Jacksonville Jaguars,” Meyer said recently. “If Tim Tebow or Travis Etienne can help us win, then that’s my job to get them ready to go play. That decision is certainly not made yet.”

Along with playing tight end, Tebow may be asked to serve as a mentor for quarterback Trevor Lawrence, the No. 1 overall pick in the draft. Like Tebow, Lawrence led his collegiate team to a national championship before becoming a first-round pick.

While Lawrence is just starting his NFL journey, Tebow is getting another opportunity to make an impact on the gridiron. The news of Tebow’s signing comes just days after Fred Taylor, the Jaguars’ career rushing leader, opened up about Tebow’s short-lived run as an NFL starting quarterback.

“I don’t think Tim got a complete fair shot in the because most of the coaches were saying, ‘We need the prototypical NFL quarterback,'” Taylor said on the All Things Covered with Patrick Peterson & Bryant McFadden. “And he’s not that. That was just before the zone reads and the offenses changed up. And I think if Tim had been able to hold on long enough to have those offenses come to fruition, and develop them as they have been the past couple years, I think you would have saw a better quarterback.”

This story originally published to CBS Sports on Thursday, May 20 at 9:20am ET.