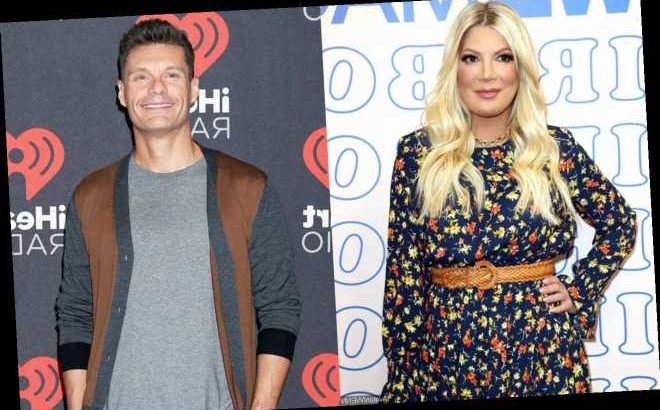 When making an appearance on ‘Overserved With Lisa Vanderpump’, the ‘Beverly Hills, 90210’ star jokingly says she ‘could be a Kardashian right now’ if she was with the media mogul today.

AceShowbiz –Tori Spelling has gotten candid about the regrets she had in life. In a revealing new interview, the “Beverly Hills, 90210” alum admitted that she wished she should have slept with Ryan Seacrest when he made a cameo on the 1990’s show.

The 47-year-old actress made the honest confession when appearing on “Overserved With Lisa Vanderpump” along with Jeff Lewis. When the host asked, per Us Weekly, “Which celebrity should you have slept with that you didn’t?” she divulged, “Ryan Seacrest. It was when he first started.”

In response to Tori’s revelation, Jeff said that she “would not be worrying about money” if she was with Ryan today. Responding to the former “Flipping Out” star’s statement, the mother of five quipped, “I could be a Kardashian right now.”

Tori, who portrayed Donna Martin on “Beverly Hills,90210”, filmed scenes with Ryan in a 2000 episode called “The Final Proof”. At that time, she was a contestant on a fake game show host named “Lovers’ Lane” which was hosted by the 46-year-old media mogul.

Ryan once opened up about his cameo when speaking to Kelly Ripa on their talk show, “Live With Kelly and Ryan” in 2017. “I had a very short role as a game show host for a couple’s game show,” he told Kelly. “I was very excited to get that role because when I was a kid in high school, I just wanted to meet Jason Priestley – Brandon Walsh.”

“He was like, he was the guy I looked up to,” the radio personality claimed. “Part of the reason I moved to L.A. was because I watched ‘Beverly Hills, 90210’ and thought the world was just like that. It’s not.”