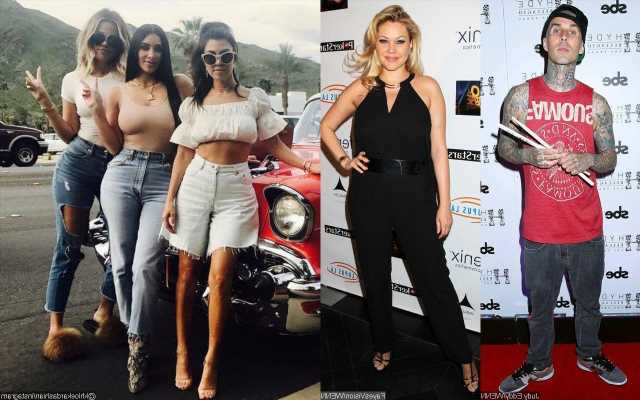 In a new interview, the ex-wife of the Blink-182 drummer appears to blame the famous clan for causing troubles in her family with Travis, with whom she shares two kids together.

AceShowbiz -If someone is to be held accountable for Shanna Moakler‘s broken family, it is the Kardashians, according to Shanna. The ex-wife of Travis Barker appeared to accuse the famous clan for being the cause of troubles in her family with the Blink-182 drummer.

“It’s every mother’s worst nightmare, honestly,” Shanna told TMZ during an outing with her new beau Matthew Rondeau. Shanna then alluded that things were fine before Travis started dating Kourtney Kardashian. “We just had dinner with our kids and all their friends three weeks ago, so you know, this all started since my ex started dating a certain person,” so she said cryptically, without name-dropping anyone.

Although she didn’t really support Travis and Kourtney’s romantic relationship, Shanna insisted that she didn’t have “any jealousy.” She continued, “I divorced for a reason. I’m confident in what my reasons were. People just don’t divorce or breakup their families for no reason at all, or for a rumor. I’ve had third-parties–even Aubrey O’Day has confirmed what I already knew, and I’ve learned even more.”

“My family’s broken now because of this family, and now my kids and I are alienated from each other because of another sister [Kourtney] in the family, so yay for me,” she added.

Shanna appeared to refer to Aubrey’s Instagram post last year, in which the former Danity Kane singer confirmed Kim Kardashian and Travis’ hookup. As she recalled her best and worst Fourth of July moments, Aubrey said, “I was ‘bffs’ with Kim Kardashian during a fourth. She was hooking up with Travis Barker and we were at his house… he was really dope.”

“Shanna his ex (who I love) supposedly was threatening to slash her tires (sorry girl but that was funny s**t, I would have too) so they asked her to park her car somewhere else,” she wrote at the time.

Travis and Kourtney started dating earlier this year. Things were going great between them as Travis’ kids Landon and Alabama allegedly “are all” for their dad marrying the “Keeping Up with the Kardashians” star “if that’s what they want.” A source previously said, “[The couple] may be ruffling a few feathers with their extreme PDA [but the kids] aren’t bothered by it.”

“Of course, they roll their eyes, but they’re hip kids, they get it,” the insider went on. “[The teenagers are] content with the way everything is right now… It’s such a cliche, but they really are just one, big happy family. [Travis’ children think] Kourtney is super cool, especially Alabama. They talk about dating boys and makeup. But what really matters to them is that their dad is happy.”