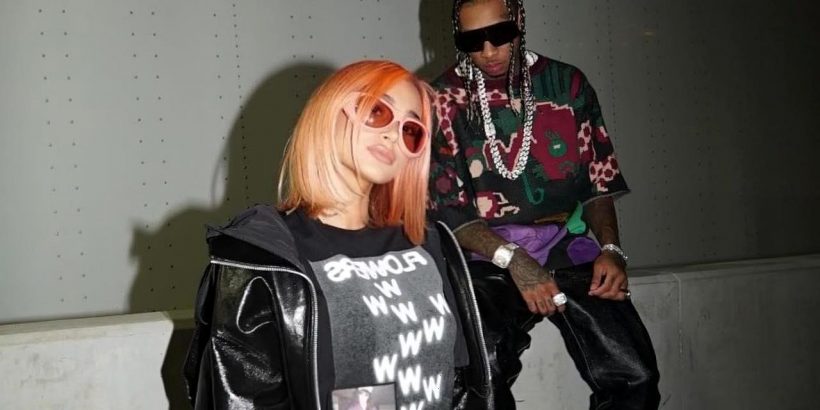 The ‘Ayy Macarena’ hitmaker is spotted enjoying his day with his ex-girlfriend and his son King Cairo months after allegedly leaving her with a nasty black eye.

AceShowbiz –Tyga has further fueled rumors that he’s back together with Camaryn Swanson. Less than six months after allegedly having a physical altercation with his ex-girlfriend, the “Ayy Macarena” hitmaker was spotted having fun with her and his oldest son in Disneyland.

The 32-year-old hip-hop star was caught enjoying a day at the happiest place on earth in Anaheim, California with Camaryn and his 9-year-old son King Cairo on Wednesday afternoon, April 6. In photos circulating online, he was seen all smiles with the blonde beauty by his side.

For the joyful outing, Tyga attempted to stay incognito as he sported a black Adidas hat over his signature braids while walking through the park with the group. He also wore a graphic print Menace T-shirt and black Adidas track pants.

As for Camaryn, she donned a white tank top with black pants. She also had sunglasses perched on top of her head. King Cairo, in the meantime, looked comfortable wearing an all-brown sweats outfit complete with a hooded sweatshirt wrapped around his waist. Tyga shares co-parenting responsibilities of his son with his ex-fiancee Blac Chyna.

Tyga and Camaryn allegedly had an altercation that turned physical in October last year. At the time, TMZ reported that she showed up at the rapper’s home in California “screaming in the middle of the night.” On the next day, the “B***hes N Marijuana” rapper voluntarily turned himself in to the Los Angeles Police Department.

Tyga, born Micheal Ray Nguyen-Stevenson, was released from jail just hours later on a $50,000 bond. Days later, he took to his social media account to slam the allegations against him. “I want everyone to know that the allegations against me are false,” he declared in a statement posted via Instagram Story. “I was not arrested. I took myself into the police station and cooperated. I have not been charged with any crime.”