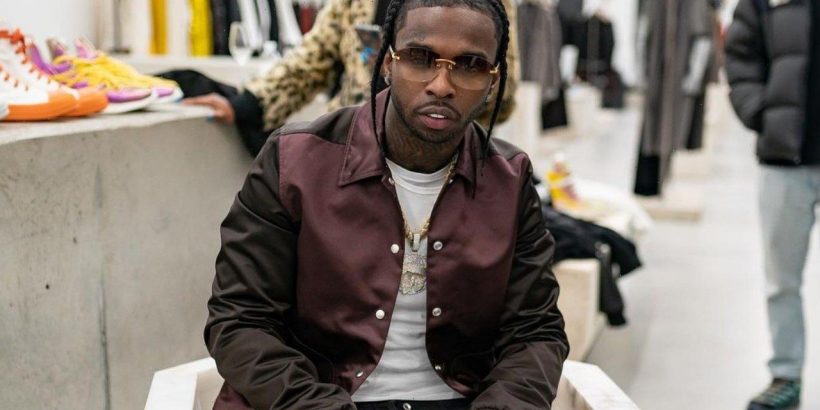 According to an LAPD detective, a witness testified that the ‘Dior’ rapper was ambushed by masked men when he was in the shower and got kicked after he was shot.

AceShowbiz -More details of Pop Smoke‘s final moments have been unearthed, one year after his tragic death in an armed robbery. According to an LAPD detective who took the stand during a hearing for one of the murder suspects on Thursday, May 6, the slain rapper was ambushed in the shower.

Recounting a witness’ testimony, Det. Christian Carrasco said in the court that the Brooklyn star was taking a shower at an Airbnb in Los Angeles on February 19, 2020 when masked men stormed through the curtains of a second-story balcony. One intruder was believed to have pressed a black semiautomatic firearm to the forehead of a woman who was with Smoke in his bedroom that night while the others rushed into the adjoining bathroom.

Hours after the incident, the woman told detectives “she heard a struggle coming from the shower area and heard Mr. Jackson screaming. Mr. Jackson ran out of the bathroom and then she heard a loud pop and [heard] Mr. Jackson fall to the ground,” Carrasco relayed the story. “Two other individuals began to kick him.”

Smoke, who was injured but still alive at the time, later, “gets up and run downstairs,” the detective continued testifying. “She hears two more pops. She follows Mr. Jackson, sees him on the ground and screams for Michael (Durodola) to call 911.”

Smoke, who was born Bashar Barakah Jackson, was taken to a local hospital, where he underwent a major surgery called a “left thoracotomy,” but he suffered a “rapid” decline and couldn’t be saved. He was only 20 years old. The “What You Know Bout Love” spitter was buried at Green-Wood Cemetery.

The Thursday preliminary hearing was held for one of the suspects, 19-year-old Corey Walker. Other men identified as suspected killers are Keandre D. Rodgers, 18, Jaquan Murphy, 21, and two unnamed juveniles who were ages 15 and 17 at the time of the incident.