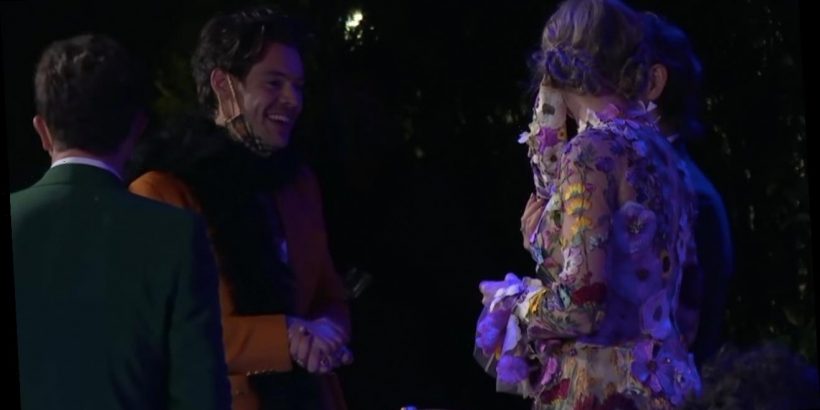 A reunion that never goes out of style! Taylor Swift didn’t just cheer on her ex, Harry Styles, during Sunday night’s GRAMMY Awards. In new footage released by the Recording Academy, the 31-year-old “Willow” singer is seen having an animated and seemingly amicable reunion with the 27-year-old “Watermelon Sugar” performer at the annual award show.

In the clip, Styles approaches Swift’s table as she stands up to talk to her ex as they both take off their face masks.

During the exchange, Swift is seen nodding and gesturing animatedly with her hands and both she and Styles appear to be smiling throughout the lengthy chat.

Swift and Styles dated for a few months in 2012, and their brief relationship is rumored to have inspired much of Swift’s chart-topping album, 1989.

It was a big night for both artists. Styles took home his first GRAMMY Award for Best Solo Pop Performance for “Watermelon Sugar,” beating out Swift, among others. But there was no bad blood over her loss as Swift was seen giving Styles an enthusiastic standing ovation. Swift’s Folklore also won Album of the Year.