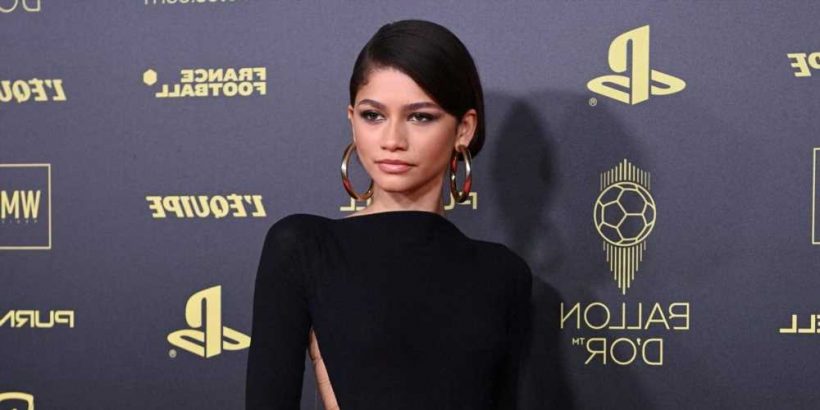 She's worn vintage Versace. Throwback Saint Laurent — from when the brand was still Yves Saint Laurent. And now, count Roberto Cavalli as one of the designers that Zendaya's bringing back from the archives. Last night, Zendaya made an appearance at the Ballon d'Or ceremony in Paris (it's an annual soccer event hosted by France Football magazine) wearing a three-quarter-sleeved inky black gown from Cavalli's Fall/Winter 2000 collection. And while the gown may have seemed simple and sleek from the front with its high neckline, when she turned around, she revealed a metallic serpentine detail slithering up her back.

As one of Cavalli's house signatures, the snakes were instantly recognizable to fashion fans, even though the label hasn't been in the spotlight as much as it used to in its aughts heyday (Cavalli himself stepped down as the creative director of his eponymous label in 2013). Zendaya paired the gown with simple black pumps and bold, thick hoop earrings, all the better to let the bejeweled snake take the spotlight. Zendaya walked the step-and-repeat alone, but her boyfriend and Spider-Man co-star Tom Holland joined her inside the event, evading yet another official red carpet debut as a bonafide couple and not a couple denying that they're together.

Journalists from around the world voted on the players to be honored at the event, which included Barcelona captain Alexia Putellas, who earned the Ballon d'Or Féminin Award, and Paris Saint-Germain's Lionel Messi, who took home his seventh Ballon d'Or.