Set just months before the events of 2015’s The Force Awakens, it follows the Resistance in their battle against the burgeoning First Order.

And, as you might expect, it’s packed full of references and Easter eggs for fans to enjoy, linking the small-screen adventures with the Star Wars movies.

All the movies, as fans are no doubt aware, begin with a shot in space and then some kind of tilt up or down.

Here, Resistance pays homage to The Force Awakens with a neat joke where we think a planet will be obscured by a spaceship but it turns out to be a droid. A very Last Jedi sort of gag. 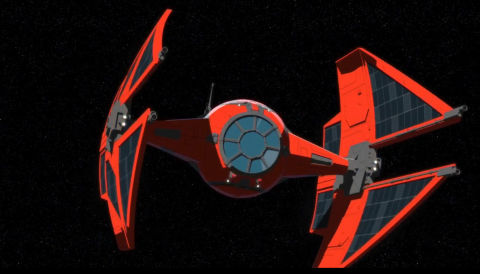 First seen in Return of the Jedi, these Imperial ships make a return many years on.

Kylo Ren pilots a modified version in The Last Jedi as he hunts down the remainder of the Resistance, including his mother Leia. 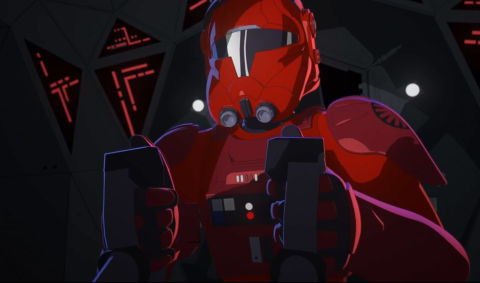 However, the version we see in the new animated show is a slightly snazzier red, matched by armour of the pilot inside, who seems to resemble a member of the Emperor’s Royal Guard (also first seen in Return of the Jedi).

One for prequel pedants, the circular, winding style of laser shot from this ship matches the Vulture Droid ships in Revenge of the Sith. 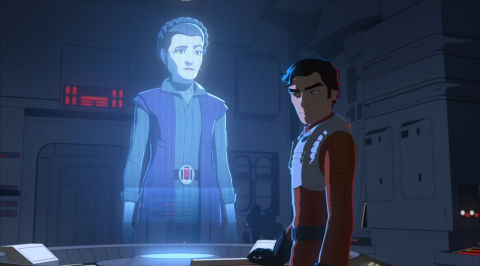 Oscar Isaac returns to the Star Wars universe to provide his voice talents for Resistance pilot Poe whilst his little BB-8 is back providing more lovable ball fun.

Leia, or General Organa, is seen in hologram having a meeting with Dameron where they have just discovered that the First Order is planning a full-scale attack on the New Republic. Presumably, this is what we see in The Force Awakens.

And, if you listen closely, you can hear Anthony Daniels reprising his role as protocol droid, C-3PO.

Mirroring that scene, where it was engulfed by the Empire’s ship, the Corvette here dwarfs the ship flown by new boy Kazuda Xiono.

Poe Dameron tells Kaz that it had seen action from the “battle of Scarif all the way up to Jakku”. Scarif was seen in Rogue One: A Star Wars Story (the planet where the Death Star plans were held) while we visited Jakku in The Force Awakens. 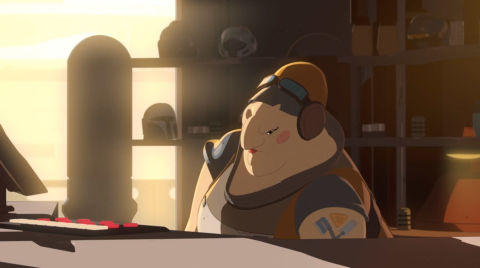 In Aunt Z’s tavern on The Colossus (a supertanker fuel depot), you can spot a Mandalorian helmet behind the bar, as worn by Boba and his dad Jango Fett in the films. A new live-action television series from Jon Favreau will concentrate on a lone Mandalorian.

Fact fans will also note that Aunt Z is the same species as bad boy Unkar Plutt (played by Simon Pegg) from The Force Awakens. Perhaps a relation?

As you would hope, there are a number of aliens species from the Star Wars movies popping up in Resistance.

On the aforementioned Colossus you’ll find a Bith (better known as a Cantina Band member), Snaggletooth, Solustan, Gotal, Arcona and more besides.

And eagle-eyed fans can enjoy a poster of a Kowakian monkey-lizard, the species Jabba’s little buddy Salacious B Crumb was a member.

This guy is quite the character. This rather large barfly is keen for a fight but it’s his tattoos that will catch the eye of Star Wars fans.

From left to right above there’s: a Rancor from Return of the Jedi; the emblem of crime syndicate Black Sun, as seen in TV shows The Clone Wars and Rebels; a Rathtar from The Force Awakens; and the Space Slug from The Empire Strikes Back.

And those are just the ones we can see! 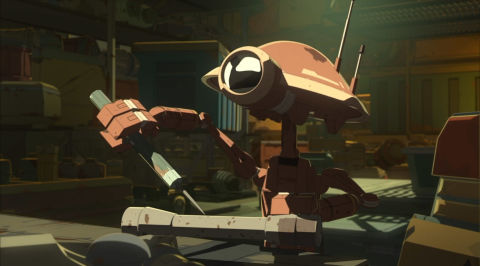 The first prequel lends a couple of notable entries.

You can find an member of the Aleena species (pod racer Ratts Tyerell was one of those) getting up to no good but you can also enjoy the hilarious antics of the Pit Droids. There’s a few helping out on The Colossus.

Bat-eared fans may also recognise a voice from that same Phantom Menace scene. Pod race commentator Fode, one half of a double-headed alien, was voiced by comedian Greg Proops and he returns to commentate on a race in the new TV series as Jak Sivrak. 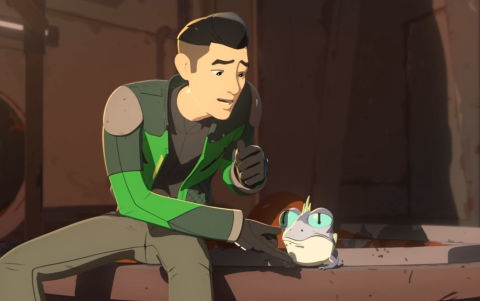 Rather ghoulishly, Luke Skywalker once boasted to fellow Rebel pilots that he “used to bullseye womp rats” in his T-16 back on Tatooine.

In Resistance, we meet bitey sea creatures called “Gorgs”, referred to as the “Womp Rats of the sea.”

Hyper Fuel, or Coaxium as it’s also known, was the prize everybody in the galaxy seemed to be after in the most recent movie, Solo: A Star Wars Story.

In Resistance, some of Kaz’s new friends have scored some “Corellian Hyper Fuel”. 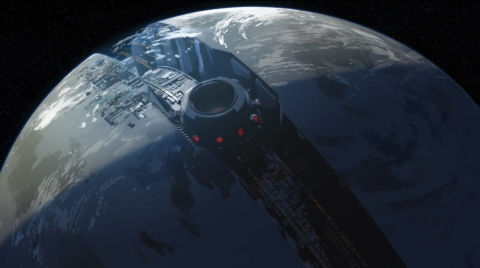 The red TIE from the opening is seen returning to the First Order and Starkiller Base – their planet-sized weapon used in The Force Awakens. Captain Phasma also gets a namecheck at this point, with her debut yet to come.